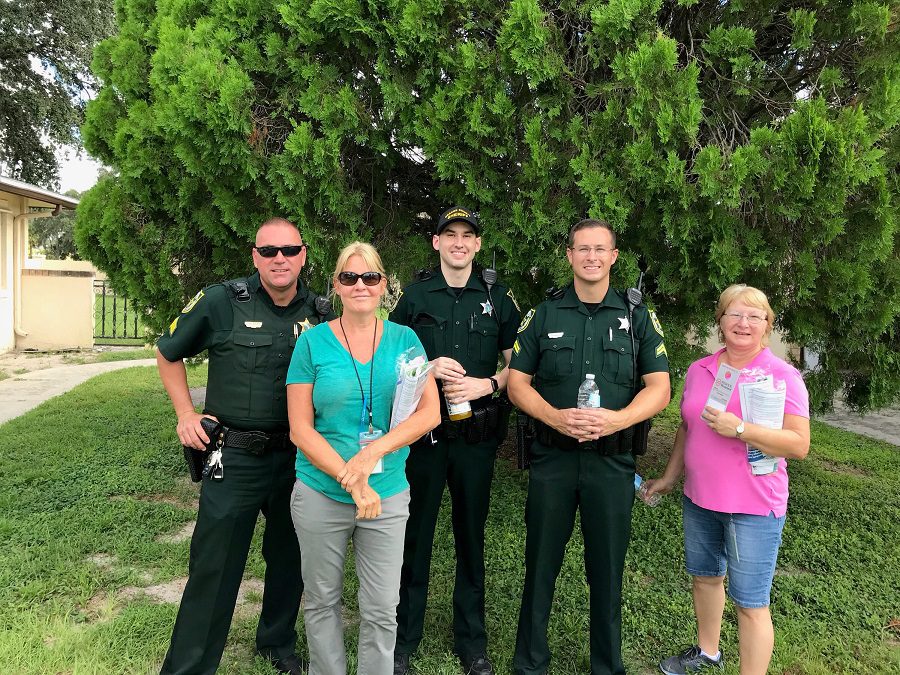 Orlando | Canvassing a neighborhood known for violent crime in sweltering 90-degree heat is not something most people would sign up for, but then again the staff of Catholic Charities of Central Florida (CCCF) is not like most people.

CCCF employees, Anita Capetillo and Robin Layton, were just two of many selfless volunteers who showed up across from Evans High School in Pine Hills on Monday August 6th for the ‘Walking One Stop’ project. Representatives from several different government agencies, non-profit organizations and outreach groups were paired with Orlando police officers and Orange County deputies. Those teams then spread out over two large apartment complexes to educate families on available resources meant to improve lives – services like food stamp assistance, legal aid, and career placement.

It’s all part of a bigger plan to reduce crime in and around Pine Hills. Orange County Sheriff Jerry Demings announced the initiative last December. When Orange County Community Engagement Liason, Lajuana Raines, saw the results ‘Walking One Stop’ provided in Miami, she decided to bring the program to troubled Orlando neighborhoods. “The goal is to try and provide resources for those families in hopes of meeting their needs and maybe cutting back some of the violence,” shared Raines.

The volunteers went door-to-door with law enforcement by their sides. Each of them with a bag full of information explaining ways to dig out from difficult living situations. Capetillo, a case manager for Catholic Charities, said it immediately reminded her of her Catholic faith. “We were reaching out to the stranger and providing resources they need. It was just good to be there and present.” Every personal struggle shared during those encounters will remain confidential.

Layton, a CCCF rapid rehousing navigator, also remembered the day fondly. She walked away “feeling connected to other people” and proud of what the team accomplished. “It’s about letting them know people care about the community. Now they have the knowledge and will be able to ask for help if they need it.”

The push to stomp out crime and uplift families will continue over the next few months in Pine Hills. Raines explained people were skeptical at first, but perceptions changed quickly. “In the beginning, some of them were a little thrown off by deputies and officers walking with us, but after a while when they learned what we were there for they were more open and engaging.”

In fact, after speaking with CCCF volunteers, many potential clients immediately asked for more information on how to receive much-needed food and rental assistance. The hope is they also walked away with strengthened faith. “It was wonderful because in that community, church is something you were raised on,” said Raines. “Those families were raised in the church, that’s their background. To see people walking the streets on a hot, humid day to provide resources to strangers not even from their own congregations… it just shows everyone is willing to give back.”