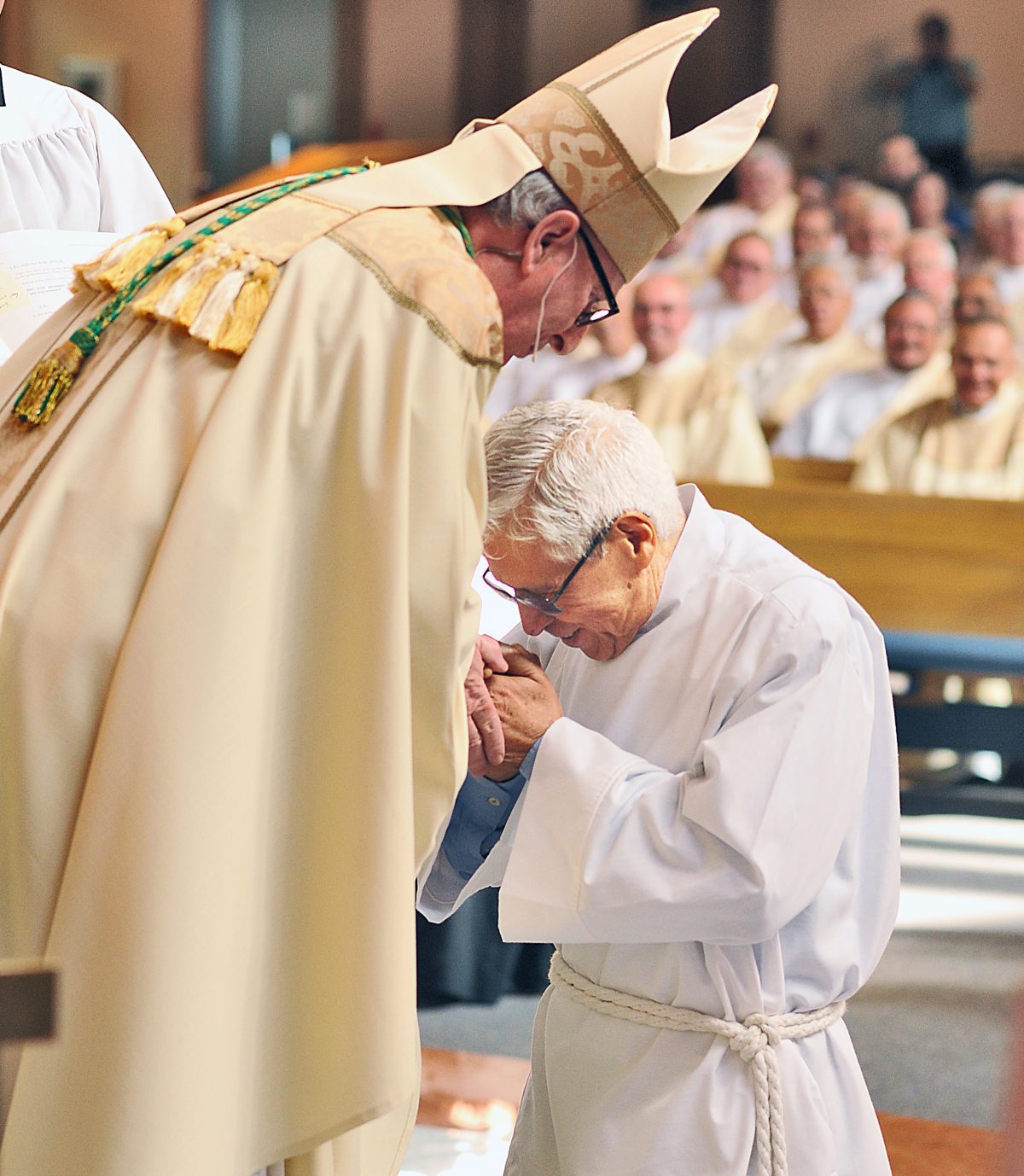 Deacon Elias Coll proclaims obedience to Bishop John Noonan and his successors during his ordination to the diaconate Nov. 26 at Holy Cross Parish in Orlando. Deacon Coll was originally scheduled to be ordained in June 2017 but due to a battle with stage 4 colon cancer, Bishop Noonan decided to move up his ordination date. “Today is a glorious day. It’s a reminder of the grace and blessings of our Lord and the abundance of God’s mercy,” sad Deacon Coll. (JACQUE BRUND | FC)

Bishop Noonan stood in front of the altar at Holy Cross Parish in Orlando and laid his hands over the head of Elias Coll. At that moment, a calling the 63-year-old Catholic had his entire life was finally fulfilled.

“From the time I was in my mother’s womb, I feel I was called to be a deacon,” said Deacon Coll.

Deacon Coll was originally scheduled to be ordained in June of 2017. But doctors are not sure he will live until then. He has stage four colon cancer and the cancer has spread to other organs. Bishop Noonan decided to move up the Ordination date, which was celebrated on Nov. 26.

“Elias has always been a servant of Christ – visiting the sick, homeless and needy. He has lived the call of a deacon throughout his life. Even in the midst of his fight with cancer he has let the gift of the Holy Spirit shine through him – always with faith, courage and joy,” said Deacon David Gray, director of the Diocese of Orlando Permanent Diaconate, and secretary of the Leadership and Parish Life Secretariat.  “All you have to do is meet Elias and you know immediately the light of Christ is shining through him.  Ordaining him now to the life he has been living was a natural decision,” he added.

Deacon Coll arrived in Orlando from Venezuela in 2003 with his family. He left to pursue better educational and economic opportunities for his children, and to be in a country that offered security, safety and freedom to live one’s faith.

“We moved here so our children could have a better future, so they could study and develop spiritually, socially as children of God. We have been blessed. God is never outdone in generosity,” said Deacon Coll, who is a parishioner of Holy Cross Parish.

His wife Enri said her husband is an example to others. Many times when people visit him because of his illness they hope to brighten his day but they are the ones to be encouraged by his unshakeable faith and deep compassion for others.

“By the glory of God I have not suffered with pain. I have not complained. On the contrary, I thank God. Thanks be to God it was me and not my wife or my children,” said Deacon Coll.

Ministering to the Sick

During his many years of participating at Holy Cross Parish he has volunteered with the Ministry to the Sick and the Ministry of Consolation. Now even though he is ill himself, he continues to serve and minister to the sick and homebound of his parish. The majority of people he visits are people with cancer.

“I am strengthened by the sick I encounter as instruments of God. I learned from Jesus how to know God and to live according to his will. That’s how I minister to those who are ill and we are united in prayer believing that what is impossible for us is possible for God. Our salvation is more important than our healing.”

In 2012, he applied to become a deacon and was accepted into the five year formation program. Less than a year later, he received the cancer diagnosis.  Since then, he has endured numerous chemotherapy treatments and has been taking heavy medications to battle the cancer. That did not deter him from continuing on the path to becoming a deacon.

Right before the Ordination, Bishop Noonan told the congregation that Deacon Coll had been chosen by the Lord, the pastor and the people, similar to the readings from Acts Chapter 6, verse 1 when the community of disciples gathered to choose seven men to ordain as deacons.

“I trust the people of Holy Cross, because they have chosen you, I too have come to believe that the Lord has chosen you,” Bishop Noonan said.

Referring to the gift of faith and the gift of Ordination, Bishop Noonan said, “On the day of your baptism you received a special gift. You were anointed with the oil of chrism, to symbolize that you are sacred. You were strengthened by the power of the Holy Spirit and you were enriched by the Holy Spirit and his gifts. Today you are about to receive the book of the Gospels because you are about to become its herald.”

Explaining the role of the deacon, Bishop Noonan said, “Pope Francis reminds us that we are a field hospital. We must go out to the world to encounter the captives, the forgotten, especially those who do not feel loved by God.”

Bishop Noonan also gave this mandate to Deacon Coll: “Elias, you are a man of prayer. You have been called to live as prayer. Pray for yourself, your wife and the family that has been entrusted to you. Bring Christ to the sick and dying. When you preach and teach the Gospel, may the Lord always be in your heart. With God’s help, you are to always act in a way that you will be recognized by the words of Jesus who came ‘not to be served but to serve.’”

In Sickness and in Health

Deacon Coll and his wife have been married 37 years and they have three grown children and four grandchildren. This illness and this journey through the diaconate has made their marriage stronger.

“We grow in love through God. We have been able to help each other, giving strength to each other and to know every day that even if we disagree or if we face difficulty, we are bound through God. It’s our foundation. Jesus is with us always,” said Enri.

“Yes always,” added Deacon Coll. “In union with the Virgin Mary, we live and work with Jesus Christ, the Virgin Mary and St. Joseph. St. Joseph is an icon for men to help them to be a good father and husband.”

Reflecting on the significance of his Ordination, Deacon Coll said, “Today is a glorious day. It’s a reminder of the grace and blessings of our Lord and the abundance of God’s mercy.”

When asked how he has been able to cope with the difficulties of the illness, he said, “Prayer, daily Communion, visiting the Most Blessed Sacrament, loving my family and visiting the sick.”

He said he will continue to do all these things until he is no longer able. Doctors have said he only has six months before the cancer will take his life. He is not concerned about the time. He is concerned about what he does with the time.

“I might pass away tonight. But it might be five years or 20 years from now. I will keep serving,” he said. “I will continue to do exactly the same things that I have being doing, preparing my soul, growing my spirit and giving to God my life, because God is my creator and I am not the one who lives, but it is Christ who lives in me.”

When asked how he wants to be remembered, he said, “By my faith!”