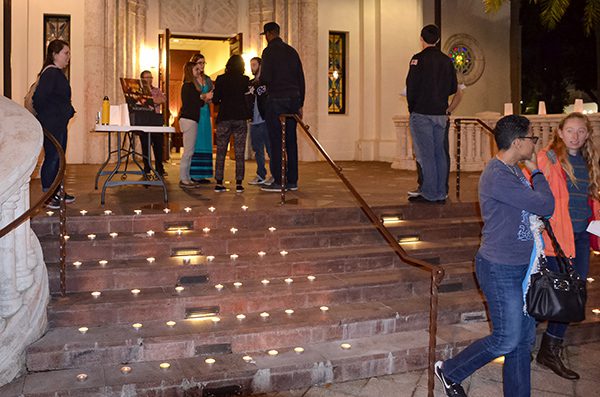 It was a cool Friday night on the eve of St. Patrick’s Day. The Young Adult group from St. James Cathedral in Orlando had been planning the Nightfever event for six months—a night of prayer, where young Catholic adults go out into the streets and invite others to an opportunity to encounter Christ. Two students began Nightfever after World Youth Day 2005 in Cologne, Germany and it has spread to 90 cities on four continents.

It all began because Father Miguel Gonzalez, pastor of St. James, had a desire in his heart to do something for the local young adult community. “Knowing how this downtown has changed so dramatically and with so many apartments in the area that house young professionals, I felt that the young adults could be the great emissaries, the great heralds, the great evangelizers who could draw these men and women to church,” he said. Then he added, “The young adults approached us with a desire to evangelize and open the doors of the church where so many people make their way to downtown and walk down Orange Avenue. They wanted to invite them for an opportunity to come and pray, and join the young adults.”

Alyssa DeLorenz leads the Young Adult group. She and her fiancé, Ryon Maree, had experienced Nightfever while attending school in Gainesville and thought the idea could work in Orlando. After training from the international Nightfever organization, the long awaited evening opened with Mass and Maree’s own conversion testimony. Adoration began with intermittent praise and worship music by Matthias Michael, then Maree sent out at least five pairs of teams while greeters met guests at the Cathedral entrance and the table for prayer intentions, candles and bible verses. A total of five priests were also present for the Sacrament of Penance or just for an opportunity to talk.

At first, Will Young approached reluctantly with his friends, none of whom chose to come in. Ten minutes later, Young returned alone. He said, “What drew me in were the people in the street at first. But it was something within myself because recently I’ve had to bury my very best friend, a brother I grew up with. I thought I was going to pick out suits to wear to a wedding together, and I had to pick out a suit to wear to his funeral… I had to scramble and figure out everything since and I’ve been so lost. I just wanted to come in and feel some kind of peace and compassion. I am so glad you all invited me in.”

Malike Harris, 21, was headed to a club when he was invited to come to the Cathedral to light a candle. He said he went in “to praise the Lord and thank Him for everything that He’s given me. It was a great experience. I felt something when I went into the church, so I’m just going to go and lay it down tonight and call it a day.”

Young adult member Sage Brownshweig said, “We had no idea what it was going to look like. For this night to finally come and see all these people coming off the street and coming to church… it’s stunning to see how willing people are. It’s amazing to see how people’s eyes really do light up.”

Among those inviting passersby was Sara Siders. She noted, “I think that greeting people with a smile beckons a smile in return. It opens the door for conversation. Everybody has something on their heart that they need to address in thoughtful prayer.”