One Parish Nurtures Five Seminarians on the Path to Priesthood

David Mullen has held a number of jobs since he graduated from Franciscan University of Steubenville in Ohio with a degree in psychology. From driving a truck and trailer to working as a technician at the Catholic television network EWTN in Irondale, Ala., Mullen has searched for that perfect career. 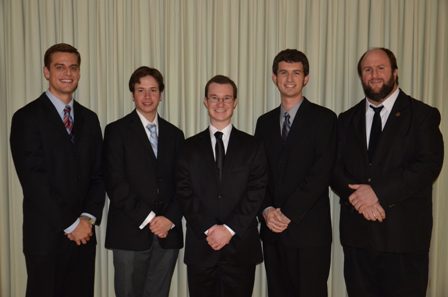 David Mullen has held a number of jobs since he graduated from Franciscan University of Steubenville in Ohio with a degree in psychology. From driving a truck and trailer to working as a technician at the Catholic television network EWTN in Irondale, Ala., Mullen has searched for that perfect career.

“But nothing was completely fulfilling; there was a restlessness,” Mullen said. “I’ve done everything and tried everything. This is what I was called to do.”

“This” refers to priesthood, and his joining the seminary, he said, is fulfilling. Now in his pastoral year and serving at the Basilica of St. Paul in Daytona Beach, Mullen, 39, is among five seminarians in the Diocese of Orlando from Holy Name of Jesus Parish in Indialantic. The others are Benjamin Lenhertz, 26; Chris Dorsey, 25; Jonathan Richardson, 23; and Mark LaBelle, 23, who joined the seminary last April.

Holy Name of Jesus has been instrumental in helping young men and women through the discernment process and finding their vocation. Through a vibrant youth group – which exposes the sacraments – and around-the-clock perpetual Adoration, introduced by former pastor Monsignor David Page, the parish provides an openness that gives young people an interest in their faith and religious life.

“I could have a real conversation with Jesus,” said Lenhertz, who served at the Basilica of St. Paul last year and is a year away from being ordained a deacon. “I could talk to him, and he could talk to me. That’s life-changing. The fruits of that have been all kinds of vocations.”

When Mullen was baptized at Holy Name of Jesus Parish as a baby, the priest whispered to his mother he would pray Mullen would become a priest. Mullen told his mother at a young age he thought about becoming a priest, but didn’t discern seriously until he began frequently attending Adoration.

“Nobody is going to call priests more than Jesus himself,” Mullen said. “That is when my vocation became reactivated and awakened.”

Richardson said he felt the calling as a youth, and joined the seminary out of high school. Lenhertz, Dorsey and LaBelle felt the calling around high school, when they attended youth groups, but graduated from universities first before entering the seminary. Like Mullen, they credited Eucharistic Adoration and youth group experiences as reasons that helped them choose priesthood.

Dorsey, who will eventually serve the Archdiocese of the U.S. Military Services as a priest, said he spent a lot of time talking to priests and peers during his discernment process. In addition to Adoration and youth group, he said his entire family had an influence on his decision.

“I did keep my discernment to myself so they wouldn’t feel pressured toward me either way,” said Dorsey, whose mother Mary is the parish’s director of elementary religious education. “They are very supportive.”

The vocations from Holy Name of Jesus Parish do not end with this group of five, however. Two other young men – Mark Cusick, 27, and Briggs Hurley, 22 – attend Mount St. Mary Seminary, and are seminarians associated with the Archdiocese of Washington, D.C., and Diocese of St. Augustine (Fla.) respectively.

Father Jorge Torres, the Director of Vocations in the Diocese of Orlando, said having this many seminarians from one parish is unique not just to this Diocese but also in general. With that in mind, he hopes it becomes common occurrence.

“We pray that it will continue to multiply,” Father Torres said. “May there be many parishes that produce these vocations, not just in numbers, but also in quality, and foster that culture of vocations, allowing young men and women the opportunity to explore where the Lord may be calling them.”

Father Tony Welle, current pastor at Holy Name of Jesus, said the quality and quantity of vocations is rooted in the parish’s hospitality, family values, Adoration, youth group and retreats.

“The simple fact is these are fertile grounds, that this place has been known for its hospitality and stability, which has helped,” Father Welle said. “There are many families that have good Catholic identities that have sent their children to school here. The youth group is centered on the sacraments and faith formation. All of these have played a role.”