Thomas Awiapo didn’t have an interest in going to school when he was a boy. But a snack and hot meal changed that. 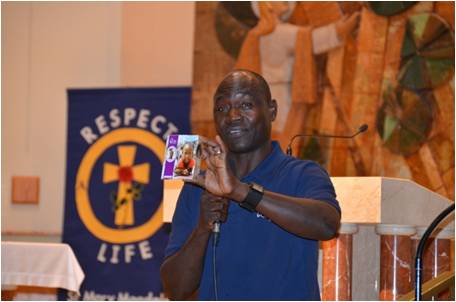 Thomas Awiapo didn’t have an interest in going to school when he was a boy. But a snack and hot meal changed that.

A native of northern Ghana, Awiapo often went without food. He lost his parents and two of his siblings to malnutrition, and a younger brother ran away, never to be found again.

“I was left there to fend for myself, helpless in a way,” Awiapo said.

Awiapo would wander about his village, starving, shunned by extended family members. But the smells from a local school – where officials from Catholic Relief Services served food and provided education – got his attention. In order to eat, Awiapo had to attend classes and learn. He didn’t want to, but he was hungry.

“As a hungry child, desperately searching for food, I thought it was wise to go,” Awiapo said. “As long as they kept providing those snacks, I kept going.”

Awiapo’s childhood education led him to further his studies. He earned a Bachelor’s degree from the University of Ghana, and a Master’s degree in public administration from California State University at Hayward. His experience with Catholic Relief Services also brought him a position with the organization. He serves as a motivational speaker who travels around the U.S. to bring awareness to CRS and the Operation Rice Bowl. Now, he visits villages in Ghana, trying to “trick” children into going to class and speaking to parents about the importance of education.

Catholic Relief Services and the Operation Rice Bowl have helped thousands of people around the world like Awiapo, who was in Orlando earlier this month, as part of a multi-week coast-to-coast tour, to tell his life story and promote the Operation Rice Bowl. Currently, CRS works in more than 100 countries, hiring locals so they can better understand and serve their needs and those of the community.

But it would not be possible if not for annual contributions to the Operation Rice Bowl program. In the Diocese of Orlando, approximately 50 parishes and 13 schools are participating in the program this year. More than $45,000 was generated in 2011.

“Even though I didn’t have parents, Catholic Relief Services was like a mother and father to me,” said Awiapo, who converted to Catholicism and is now married with four children. “My kids are in school today, snack or no snack. I can provide three meals a day for them. They have this because CRS provided me with the education.

“Operation Rice Bowl is a gospel of love, a gospel of compassion, a gospel of hope, for many, many millions of people around the world,” Awiapo said.

But Operation Rice Bowl is only one program Catholic Relief Services uses to help those in need. Other programs include Fair Trade and FoodFast, which educates middle and high school students more deeply on life, lifestyle and needs of others who lack basic necessities.

“As Catholics, we are to be people of our faith, we are called to care for people everywhere, and we must live in solidarity if we are to truly live out our baptismal call,” said Stephanie Bosse, CRS program coordinator through the Diocese of Orlando’s Office of Advocacy and Justice.

“Solidarity means that we must protect, support, pray for and love all life,” Bosse continued.

A special collection for Catholic Relief Services will be held March 11 at parishes throughout the Diocese. Money raised will provide assistance to victims of natural disasters and other emergencies worldwide; help victims of human trafficking; provide legal services and supply outreach and pastoral care to struggling immigrants; and give aid to struggling, poor families in the U.S.