Ordination to the Priesthood – a Day for Rejoicing

On May 28, Luis Salazar and Martin Nguyen entered St. James Cathedral as deacons and left as priests. 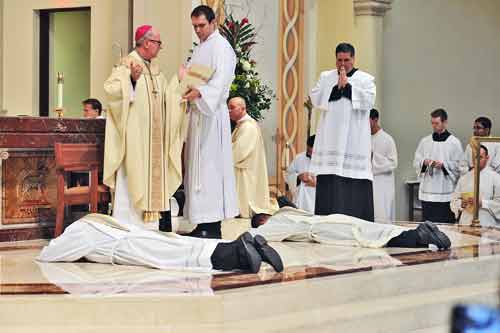 On May 28, Luis Salazar and Martin Nguyen entered St. James Cathedral as deacons and left as priests. In the presence of more than 1200 family, friends and supporters, the two men were ordained as priests by Bishop John Noonan. Both are from opposite sides of the world, and in their faith journeys, they’ve traveled many miles.

Parishioners of Holy Family Parish in Orlando, Father Nguyen’s church home for many years, chartered a bus to transport them to St. James for the Ordination. About 50 parisioners enthusiastically participated with prayers of support. Also, since the Mass was live streamed, family members back home in Vietnam and Colombia were also able to participate via technology.

Being ordained during the Year of Mercy is especially significant for both men. “I think being ordained shows the mercy of God towards me,” Father Salazar said. “At the same time, I am called to be a minister of mercy for the people of God.”

“Only love and mercy heal the wounds of violence and anger,” Father Nguyen said. “We can’t grow and become better by focusing on the negative. Mercy isn’t condoning everything. Mercy, love, is the final answer and God’s love heals everything.”

Particularly moving during the Ordination was the moment in which the newly ordained were assisted by mentor priests in arranging the stole and wearing the chasuble. All the while, the choir chanted Psalm 110:4, “Christ the Lord, a priest forever in the line of Melchizedek, offered bread and wine.”

These men fall in the line of this first priest mentioned in the Old Testament and in apostolic succession, a long journey indeed. Their journey is also a witness to others. Edwin Rios, a discerner of several years and a recent high school graduate said, “I can see a fulfillment of the work and prayers of these men. I hope to get accepted to the seminary. If God takes me that way, I will gladly follow.”

After the Ordination, Salazar’s mother Isabel perhaps put it best when she said, with tears in her eyes, “It is a joy in the Lord that is indescribable!”