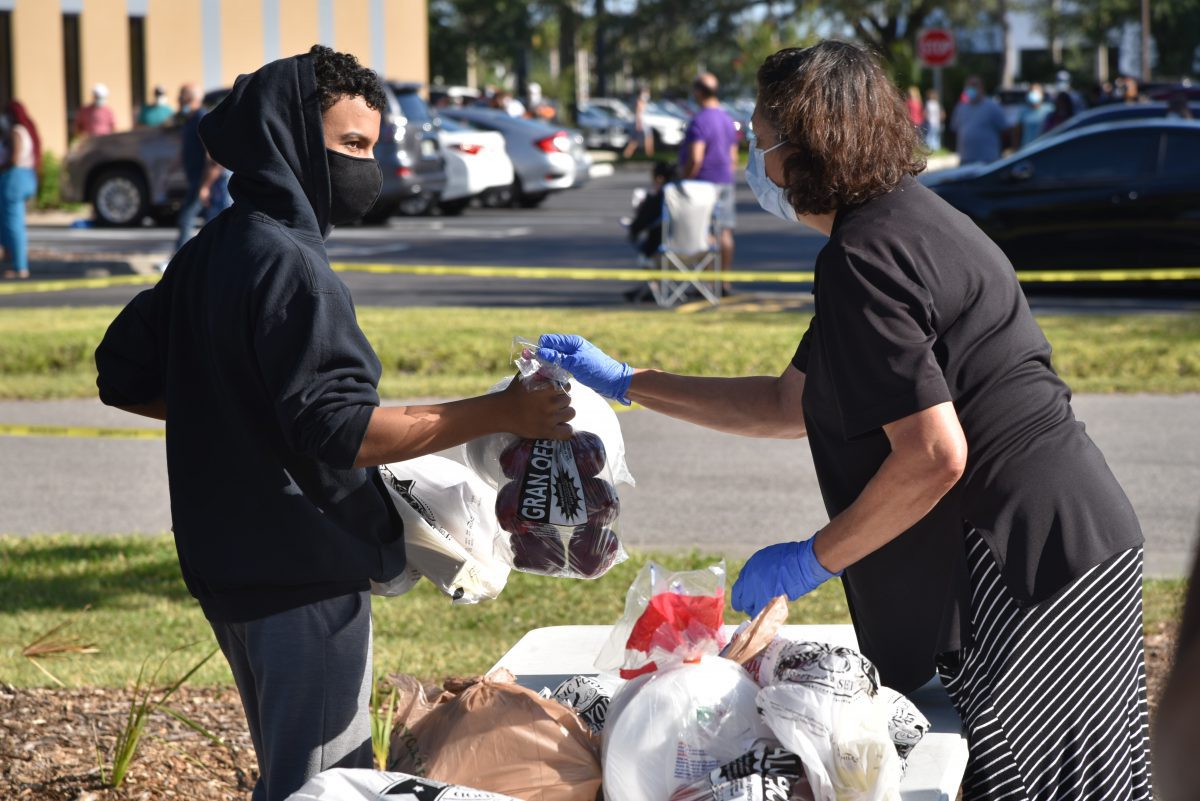 Editor’s note: Some last names have been omitted to protect privacy.

ORLANDO | Andrés Mendoza left Venezuela for a better life for his family. The reality is, no matter where in the world he lives at the moment, he cannot escape the pandemic and its overreaching effects. “This is a new thing in the whole world. Everyone is losing jobs. I have friends all around the world and they say they are passing through the same thing,” said Mendoza. The former warehouse associate is one of more than 500 people in line on a Wednesday morning at Catholic Charities of Central Florida’s (CCCF) Mission Market in Orlando. The pantry is feeding almost five times the amount of people per day than it did just six weeks ago. 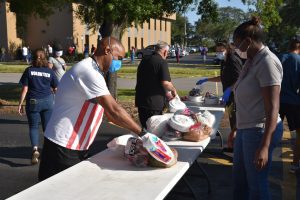 “We are serving as many in one week as in a typical month,” said Gary Tester, president of Catholic Charities. “We are serving, by extrapolation, as many in a month as we might typically in almost four months. I can say with confidence these numbers far exceed anything experienced here in the past 10+ years.”

Most of those standing in the line, that now regularly wraps around the main building on Semoran Blvd. twice, have lost their jobs. Housekeepers, construction workers, and skilled labor – all are affected. It took Mendoza at least five tries over the course of a week to finally be able to submit an unemployment application. “It was a nightmare to apply for it. I would wake up at 3 a.m. to apply for my wife because she is unemployed too,” he said. She was a housekeeper and lost her job in early March. They received their stimulus check, which helps, but still await their unemployment income. With three children at home to feed, Catholic Charities has been a God-send. “I think they’re (CCCF) doing a great job for everyone. All the communities that are helping the people are a very good thing. These are very difficult times we are passing through,” he said. 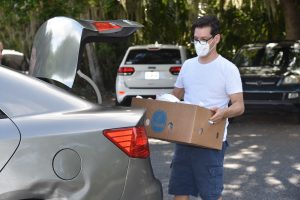 Juan Vega helps manage the food ministry at CCCF. He noted, “Pre-COVID, we were serving between 300-400 families a week with four days of service. Now we’re doing three days of service and minimal of 500 per day – a little over 1,500 families per week. When asked if they were running out of food before closing time, he said, “Our God is good. I was worrying about that two months ago, and got on the powers that be saying, ‘Hey, we need food.’” God heard and is supplying for the demand.

“We are not safe from what’s happening around us. We depend heavily on the Grocery Alliance and Second Harvest,” Vega explained. He noted that some days there is meat, while others there is produce. He tries to balance what they offer in each 15 lb. bag CCCF provides. “We’ve been able to manage and continue to service our families,” Vega said.

For the pantry, the Grocery Alliance (Publix, Walmart, Sprouts, Costco and others) is the lifeline. Drivers pick up twice per week to cover pantry needs. Vega says the supply has improved from the days just after the shelter-in-place requirement took effect. As the state slowly re-opens, shelves are staying stocked with items for longer periods, making scarcity less of an issue than it was in the early days of the pandemic.

“Most of these folks probably come here Monday, Wednesday and Friday. So we are getting them by,” he said. His statement was confirmed by many waiting in line who are relying on the pantry. “We continue to focus on having something meaningful to give. We’re not just giving food to give food. We are giving these folks three to four meals.” He noted many are strategizing their pick-ups with other area pantries and food drops. The difference, he said is, “Most (pantries) are tapping out at 200 pre-bagged, first come, first served.” 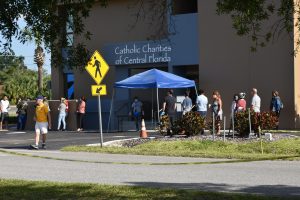 The extra distribution is possible through the charity of about 20 new volunteers. “This has sparked a lot of people to help. I’m enjoying that. People understand we need to stick together and that’s been awesome to see. Without volunteers, I can’t do my job. It’s a great moment for me.”

One of those new volunteers is Maria Marcano, a former St. James Cathedral School business manager, now retired. “The line was impressive when I came in,” she noted. “Serving is doing what I’m called to do – to help wherever I can. I’ve been blessed so I have to pay it forward. We are living under very difficult and strange times and we’re doing what we can. If we all help, we’ll get through this one too!”

Housekeeper, Maria, was in line for the first time after losing her job at a vacation rental property in March. She did the best she could, but said, “The bills don’t wait. Things are bad.” Next to her was Rosana. She had to close down her food truck after COVID-19 restrictions made it impossible for her to operate. She said she prays the pandemic ends soon and feels sorry for those less fortunate than her. She and her husband are young, but notes others have more difficulty. “Living like this is tough,” she said. 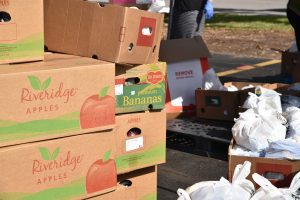 Vega emphasized the need for contributions, whether monetary and through physical food donations. He encouraged dry grocery item donations for those without refrigeration and asked for nothing in glass. “Just make it here. We need it. People living in cars and in the woods need to eat,” he said.

Donations can be brought to the following markets during hours of operation:

By Glenda Meekins of the Florida Catholic May 18, 2020