Julie Beu, an 8th grade student at Holy Family Catholic School in Orlando placed third in the national Maryknoll Fathers and Brothers Essay Contest. Her entry was judged and won third place out of 6,296 entries from Division 1, 6-8th grade, from across the country. 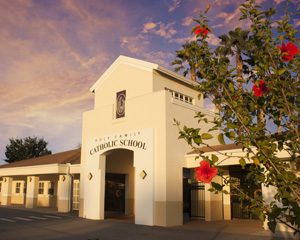 Julie Beu, an 8th grade student at Holy Family Catholic School in Orlando placed third in the national Maryknoll Fathers and Brothers Essay Contest. Her entry was judged and won third place out of 6,296 entries from Division 1, 6-8th grade, from across the country.

On March 2, Julie received a check for $150, a Certificate of Merit and a congratulations letter in front of the entire student body. In addition, her picture and excerpts from her essay will be featured in the May/June issue of the Maryknoll Magazine which has a circulation of about 500,000 mostly in the U.S., but also around the world.

The ongoing issue of bullying was the subject of the 2011 Maryknoll school essay contest. The assignment for the contest was, Jesus and Bullying. The students were asked to recount an incident from their lives, or describe an experience of someone they knew, that involved bullying. The students were required to ponder what they thought Jesus would have said to all the people involved in the incident.

“We were deeply moved by the personal stories students shared,” said Margaret Gaughan, managing editor, Maryknoll magazine and coordinator of the annual student essay contest. “What impressed us most were the Christian values these young people exhibited in coping with hurtful situations. Their insights on following Jesus in the face of adversity offer powerful lesson to all of us.”

Julie’s essay was an opportunity to tell a story that made a lasting impression.  “I wanted to tell the story about my friend Amanda,” she says.  “It’s a story that needed to be told.”

In her essay, Julie tells about the friend she knew at another school who had Asperger’s Syndrome, an autism spectrum disorder, which can negatively impact peer relationships.  She describes how Amanda was at first accepted, then became the object of a cruel joke, and was finally ostracized by her classmates.

“I couldn’t imagine what Jesus was thinking when he saw what was happening to Amanda,” she wrote.  “He must have wanted to come down from heaven and hold her in his arms.”

After months of bullying, one of Julie’s classmates could not stay silent any longer.  A girl named Sasha grabbed Amanda by the arm and brought her to sit with her at the lunch table.  Julie detailed how Sasha turned to those in the cafeteria and said “Does demeaning someone who has had a hard time since she got here make you feel good inside?  Are you proud of yourselves now?  If Jesus came here and watched what you just did, how would you feel?  Think about it.”  Julie wrote that “I believe Jesus really did come down from heaven and wrap his arms around Amanda.  Jesus sent Sasha to take care of Amanda and end bullying in that elementary school.”

Julie concludes her essay with the lesson that she learned from that day, one that she hopes others will too, saying, “I think we should all follow her example to be Christ-like towards others and not to be afraid to stand up for what’s right.”

“Through her essay, Julia has led the way for us,” Sister Dorothy Sayers, principal of Holy Family tells her students,  “We are called forth to put on Christ.  If we did that, there would never be an unkind word.”