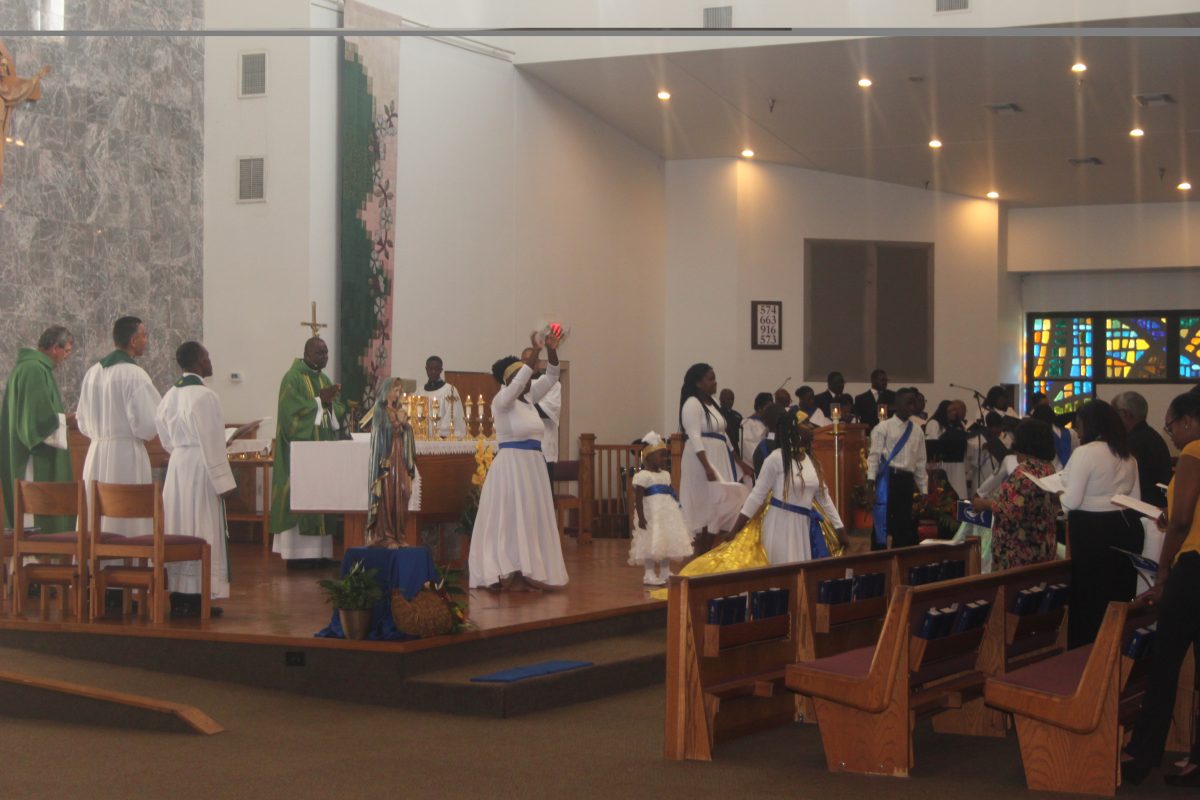 The youth of St. Joseph’s Catholic Church dance as the choir sings to celebrate the parish’s 15th anniversary at Palm Bay. (PHOTO by MAURICE BEAULIEU | FC)

ORLANDO | The Haitian community celebrated 15 years of practicing their Catholic faith in Palm Bay. During an afternoon anniversary Mass on Sept. 29th, St. Joseph’s Catholic Church overflowed with a diverse crowd who clapped along and sang loudly as the choir played throughout the night. A celebration followed shortly after members of the Haitian group were honored, speeches were made and all rejoiced in Jesus’ name.

Every moment of the Mass pulsated with joy as the priests read their sermons. While the talks were primarily in Creole, the speakers slipped in a few English sentences for the non-Creole worshippers in the pews, making sure nobody felt excluded.

Father Pierre Soul Estefont spoke about Sts. Gabriel and Raphael. He noted the power of starting over through God’s grace as a principal factor Catholics must have every day in their faith. “God gives us another chance to change our lives,” Father Estefont said. “We have that chance today, friends. God gave you that gift.”

As the Mass progressed and the church members sang along, some worshippers approached the altar, carrying baskets of fruit as an offering to God. Food, dancing, and goodwill continued at the reception hall just across the parking lot. The churchgoers gathered to help each other prepare food before the main speakers of the night took the stage.

Father Vilaire Philius greeted his flock and made sure everyone had a plate of Haitian food before he took his own seat. He danced with parishioners, blessed the numerous cakes, posed for pictures and encouraged others to rejoice in the parish’s anniversary.

Ella Austin, proud to call herself a cradle Catholic, spoke to her faith family. “The Lord is in this room!” she said to a roar of cheers. Although not Haitian herself, but hailing from Dominica, a small island between Guadeloupe and Martinique, Austin shares much of the culture and Creole language with her Haitian brothers and sisters in Christ.

Regardless of the obstacles the Church may endure in the future, Austin is solidified in her Christian faith. “No matter what, I will never change as a Catholic.” Noting the similar devotion of her Haitian peers, she said, “When they are with you, they are with you all the way.”She enjoys the Haitian-influenced Masses because there isn’t any need to rush the process. “I like to hear the [Catholic] message.”

Another devout Catholic and member of the parish, Hiram Octave Grandoit, spoke to his fellow Catholics about their faith and the importance to continue being good Haitians. “We are a community of love,” he said, reminding his audience of their benevolence. “Peace begins with a smile.” He took great joy in representing his fellow islanders. “Haitians are very intelligent, hard-working and we value life,” he said. “Education is primary for us.”

Taking part of the Catholic Mass is a blessing he and other Haitians relish each week. “We are there to participate and we know that Jesus Christ died for us.” Grandoit wants other Catholics to know harmony and integrity should remain paramount in their conversations and their actions. “We cannot say we want to have peace, if we are not working for justice.”

Always engaging with his community, Grandoit looks forward to many more years. His advice for Catholics is not to judge others quickly. “Try to know the person. Try to acknowledge the person because God died on the cross for us, for all of us…Who are we to judge?”

Both Grandoit and Austin honored the fourth bishop of Orlando, Thomas Wenski, for the creation of St. Joseph’s Catholic Church and the Haitian influence encouraged at the parish. “[Wenski] fought a lot to have a Haitian community here at St. Joseph’s,” Grandoit said. “God will provide for us.”

By Maurice Beaulieu of the Florida Catholic October 2, 2019