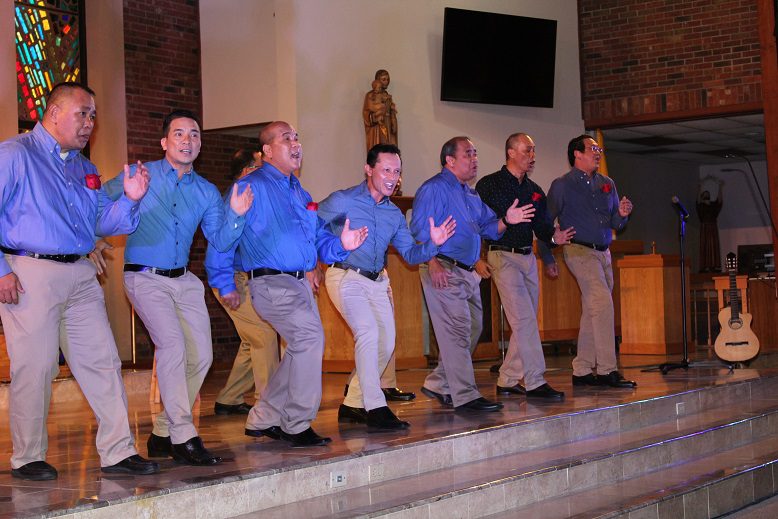 ORLANDO | Paring Pinoy of Orlando, the Diocese of Orlando’s singing Filipino priests helped St. Anthony Catholic School in Lakeland celebrate its silver jubilee on Sept. 14. The concert attracted more than 400 fans who heard the priests sing everything from the national anthem of the Philippines to the Beatles’ “Can’t Buy Me Love.”

The troupe united eight years ago. “Fellowship among priests strengthens our faith, fraternity, and formation,” said Father David Vivero, pastor of All Souls Parish in Sanford. “We have come a long way to build this relationship and we realize how blessed we are to be together.” Also known as “Ahmen”, Father Vivero says the name came up as a combination of the words “awesome” and “affirmation”, referring to their vocation.

The Fall tour began at St. Anthony Parish in honor of the school’s 25th anniversary. Former parochial administrator, Father Percival (Val) DeVera, is a member of the vocal ensemble. He said, “As soon as we began planning the 25th anniversary celebrations, I asked my brother priests in the Filipino ministry if they would be willing to perform with me at Saint Anthony. The proceeds of the concert were to support our school fundraising. We like to perform and show everyone that the priesthood is a source of joy.”

St. Anthony’s principal, Janet Peddecord was thrilled with the decision. “The Paring Pinoy were a delight to watch and listen to and brought so many smiles to the faces of everyone in the crowd (and we were very crowded). Closing the show with Father Val singing “God Bless the USA” brought tears to my eyes.  As the people left the concert all I saw were smiles and all heard was, ‘Thank you!’”

Father Roy Eco of Blessed Sacrament Parish in Clermont coordinated costumes and Father Ramon Bolatete of St. Faustina Parish in Clermont selected the music. Teachers, students, and two parishioners entertained during intermission and “added a local touch to the evening” according to Peddecord.

Father Bolatete has been with the group since the beginning and said it was begun to “build up the community of priests and as a vocations campaign – to let people know that the priests are human beings who can sing and dance and cry and laugh.” They also wanted to help build the Filipino ministry.

He said the music was a combination of secular and religious songs “to wrap up the idea of how we, as individual priests, arrived at our vocation and our vocations stories.” As a founding member, he says he continues to do it “because it reconnects us with music as an art and gives us a sense of camaraderie and nurtures our support for one another, our being community. It helps us network with other parishes,” He added, “It builds up the diocese and diocesan families through our cultural contributions.”

By Glenda Meekins of the Florida Catholic – September 25, 2018