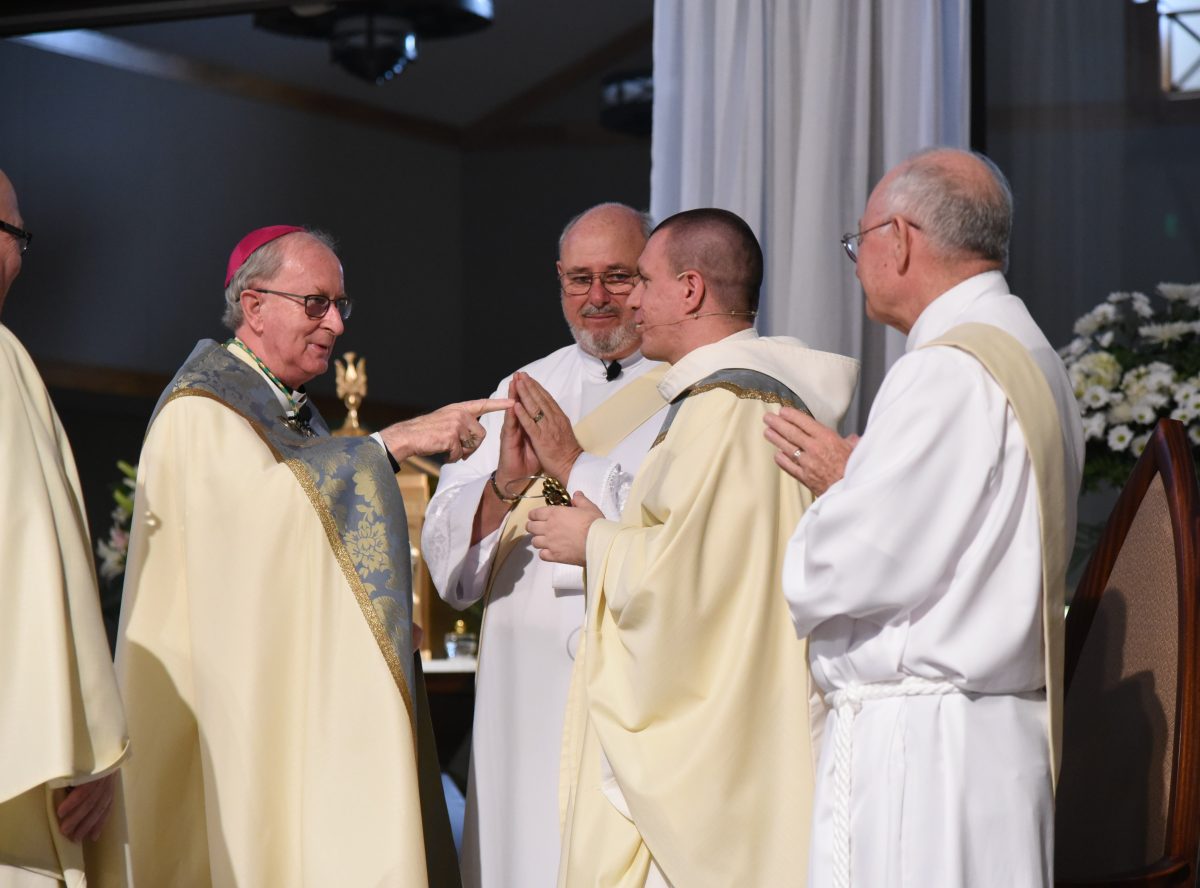 SUMMERFIELD | He’s a long way from home and on an amazing spiritual mission. Father Rafal Kandora’s “yes” to our Lord brought him from his native Poland to Manhattan and eventually to Summerfield, FL in rural Marion County. The newly installed pastor looks forward to the future and sees exciting things for St. Mark the Evangelist Parish.

“I am understanding more what the Church and what the priesthood is,” he said to parishioners. “It is not something for myself. It is a gift for each one of you.” Father Kandora then bowed before God and Bishop John Noonan after receiving the keys to the parish on January 26.

Father Kandora is a religious extern of the Order of St. Paul the First Hermit – better known as the Pauline Fathers – a monastic order with a love of liturgical prayer and devotion to Our Lady. While they are the pillars of his spirituality, Father Kandora believes this is the call for all Christians. “It is so easy for me to take it for granted that I am baptized,” he shared with the crowd. “But if the Church is the reality where God is calling us, it means He has called each one of you here.” Picking up a brick he brought with him, he added, “We are the living stones. A building is not one brick. The Church is built with bricks that create something, one Church. It means that each one of us has a role and mission in Church.”

Father Kandora has been ordained for 10 years and is now leading the parish during its 10th anniversary. He prays “just living the Way” will inspire others. He also takes comfort in the following words of Saint Augustine of Hippo on the anniversary of his ordination, ‘For you, I am a bishop, with you, after all, I am a Christian. The first is the name of an office undertaken, the second a name of grace; that one means danger, this one salvation.’

Looking ahead, the pastor is focused on the parish motto: “Where friends become family.” He noted, “We are all so different… To be a Christian is not just a coincidence… we’ve been called by name to change the world. So let us thank God for this community which is the instrument, in God’s hands, to spread his love and mercy.”