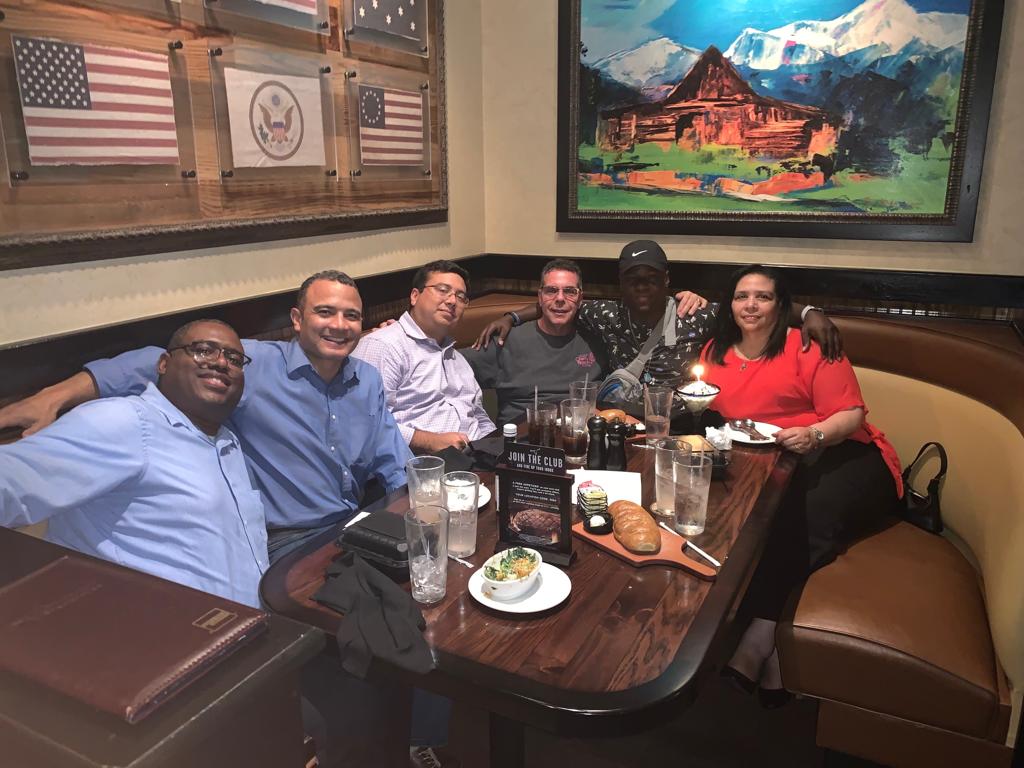 Open Table mission team members from Sts. Peter and Paul Parish support Ricketts through weekly meetings, providing resources to meet his goals. The family atmosphere and support is critical to the success of the program. (COURTESY)

ORLANDO | In the fall of 2017, Catholic Charities of Central Florida was the first Catholic Charities in the nation to partner with Open Table, a national organization that takes a family approach to helping people get back on their feet. One and a half years later, nine parishes have held more than a dozen tables in the Diocese of Orlando – the first diocese to participate. Akin to raising a family, parishes have met the joys and challenges of assisting their brothers and sisters, while serving as Christ to those in need.

The family-based, community approach involves a team that serves as life coaches for a “brother” or “sister”. The volunteers make a year-long commitment to act as encouragers, advisors, guides, and supporters of an individual who has agreed to work with them.

Brother Paul Santoro, OFM, is the mission leader for Open Table at Sts. Peter and Paul Parish in Winter Park. As part of an effort to grow the parish outreach ministry, a team of seven volunteers trained and welcomed Earl Ricketts, a young man in transition from Covenant House, a shelter for youth in Orlando. Ricketts admits meeting “a bunch of people” he didn’t know was overwhelming at first. He said it’s usually hard to open up to people quickly. Yet they gained his confidence and were able to build on his desire to succeed.

“Open Table showed me there are people who can help when there’s nobody to help you. They’ve showed me other people can change the road you’re about to go on by being that role model in your life,” said the 21-year old of his experience. “It changed the way I think about life – saving, being more smart about my money; making sure I plan ahead for certain events and sticking to it.”

The offer to participate in Open Table came to Ricketts after living three years at Covenant House. His family life was difficult. He ended up on the street alone. After a teacher helped him find shelter, he recalls, “I was praying that God would give me some guidance in life. He answered my prayer overnight.” That was when he found Covenant House. By May of 2018, it was time to move on and Open Table seemed like a reasonable option. The team at Sts. Peter and Paul were “more like role models, teaching me, telling me what to do and how to do it. It was more like family,” he said. And that is the goal.

With their guidance, Ricketts is renting a room from a parishioner. He now has a car and is working two part-time jobs, saving for his future. Brother Santoro noted, “The only thing that hasn’t been worked on is his desire to go back to school. He needs to work and build up some resources to be able to do that.” He believes the group’s gender and ethnic diversity – males, females, Latino, Haitian, African American – helped make a difference. It helped give Ricketts people with whom to relate. Like a proud father, Brother Santoro says of Ricketts, “He grew up rather quickly. He learned to take responsibility for his life. He’s been doing well.”

Team member, Gigi Santiago, agreed. “It was rewarding helping someone achieve goals they wanted to set for themselves. He wanted to accept the responsibilities of adulthood.” She added, “We were the body of Christ. We were Eucharist to him. We welcomed him into the community, into our lives. I hope and pray we were the face of Jesus to him in many aspects. A number of the men in our cohort really embraced him and took him in. It really was a community. Isn’t that what Eucharist is, the thanksgiving piece and also being the body of Christ to someone? Bringing that spiritual perspective in while respecting where he was coming from (as he was not Catholic).”

While Sts. Peter and Paul’s team is a classic example of how one would hope things would go, other parishes have faced greater challenges. Patrick Philbin, mission leader at St. Mary Magdalen in Altamonte Springs says success is not measured only in financial independence or gaining shelter. The spiritual progress of dedicated parishioners is also of value.

He acknowledged, “It did not go in the direction most of the members of our team wanted it to, but the effect it had on our team is every bit as important as the effect it had in the individual we worked with. The impact it had on us had to do with how we felt it presented us with an ongoing opportunity to help somebody. We’re all made up of our own experiences, and some of those experiences may have made us look at ourselves and how we approach things.” He noted the fact that some on the table who had “come from other means” were forced to look within themselves to try and understand the candidates’ situation. Philbin said that was a blessing to the team. On the next table, he said they will focus on building the relationship before tackling needs, in order to build trust.

Epiphany Parish in Port Orange hopes to begin a third table in September. Joe Villanella agrees the effort can be challenging. Like raising a child, so much is out of one’s control. He said, “We’re trying to give gentle, loving advice. We know we can make a difference, but the individual has to be genuinely committed to changing their lives… open-minded and willing to take advice. There are going to be some minor tasks and changes if you really want to change your life.”

His team worked successfully with a single mother whose desires were to find more rewarding employment, understand budgeting and learn ways to manage her debt. However, “At the very end of the process she slid back into her comfort level and made some bad decisions,” said Villanella. “Although it was disappointing, we know in our hearts we can make a difference, so we’re willing to stick our necks out again to do that.”

The family approach embraces candidates as a community, walking with them even after their year is over. Teams are encouraged to stay in touch for at least two years. After all, families don’t just disappear. Brother Santoro recently met with Ricketts and says he is doing well. “It is really faith in action, what it’s all about,” he affirmed. “We hear in the Scriptures how we should be taking care of those who have less than we do, those who are struggling to get by in life. This is just a perfect example of how a parish and some of our parishioners took the Gospel and ran with it, and said, ‘Let’s do this. Let’s practice what we preach.’”