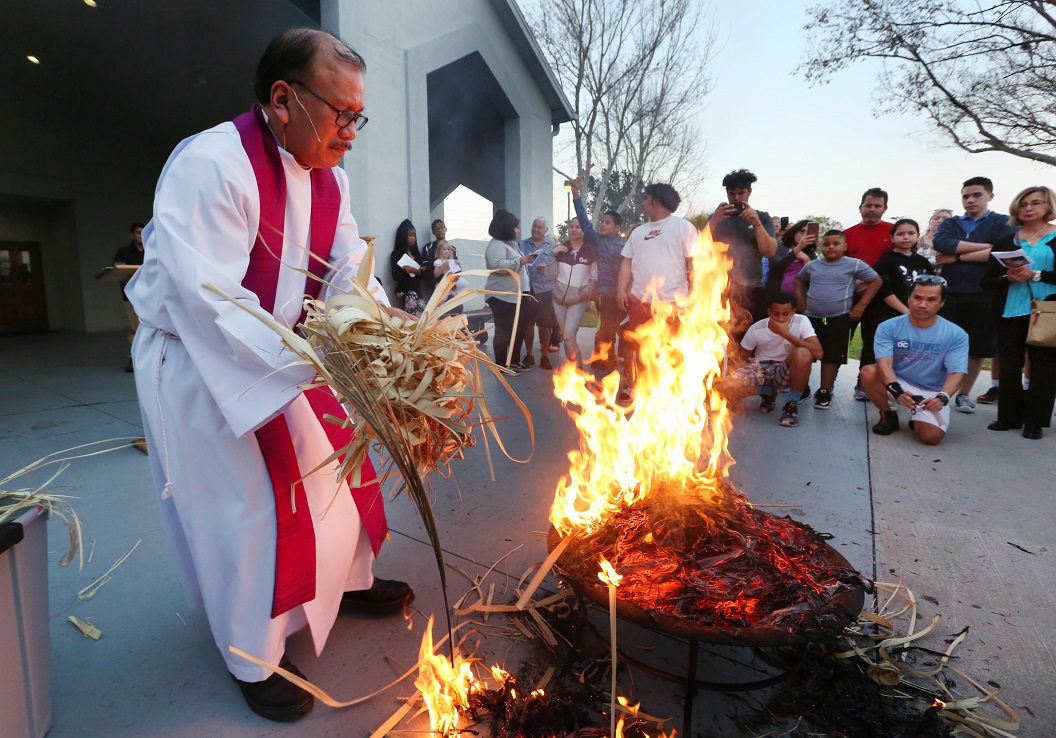 On Feb. 28, Father Juanito Figura, parochial vicar of Holy Cross Parish in Orlando burns palm fronds from the last year’s Palm Sunday Mass. The ashes from the palms were used during the Ash Wednesday Mass on March 1 “It’s like burning our past sins. The burning ashes will be used tomorrow and it’s symbolic because it asks that we are renewed by Jesus,” said Father Figura. (STEPHEN DOWELL | FC)

A fire burned brightly and billowing smoke rose above Holy Parish on Feb. 8, the day before Ash Wednesday, as a symbol of past sins and renewal.

More than 80 parishioners gathered around to burn their palm fronds from the previous Palm Sunday before the start of the Lenten season in a tradition that connects the liturgical year from Palm Sunday to Ash Wednesday and has taken place at the church for the past 10 years.

When Father Juanito Figura, parochial vicar, asked the children about the importance of burning the palms from Palm Sunday, a little boy responded that they are important because they are blessed. Figura said when Jesus entered Jerusalem; the people who welcomed Him with cloaks and palms and sang Hosanna were the same people who later said to crucify Him.

“Sometimes, we welcome Jesus, and sometimes we reject Jesus and go against his teaching,” Father Figura said. “The burning of the palms is not just a tradition, but there is a liturgical, catechetical and spiritual value to the activity. It’s like burning our past sins. The burning ashes will be used tomorrow and it’s symbolic because it asks that we are renewed by Jesus.”

Guitar music and singing followed prayers as hundreds of palm fronds were lit and added to the fire. Parishioners joined in song and sang, “We rise again from ashes to create ourselves anew… We offer you our failures…an offering of ashes, an offering to you.”

Thomas Stelling, a parishioner with Holy Cross who helped feed the fire with the palms, said it’s a blessing to be part of the tradition and shared how he plans to make most of the Lenten season.

“I am going to try to be quiet and listen to what God wants me to do before I leave this earth,” he said.

Following the ceremony, parishioners joined together for a potluck dinner and then helped prepare the ashes for the Ash Wednesday Mass by rolling them with a roller and then straining them.

Pearl Ramirez, a parishioner with Holy Cross, said she attended with her children as part of a tradition that they started last year. She said her children look forward to interacting with their friends and taking part in preparing the ashes for Ash Wednesday.

“It shows my daughters the whole meaning of the blessing of the palms and the burning of the ashes,”
she said. “They get extensive pride in preparing the ashes for tomorrow and they help contribute, which makes us feel more like a part of the church family.”