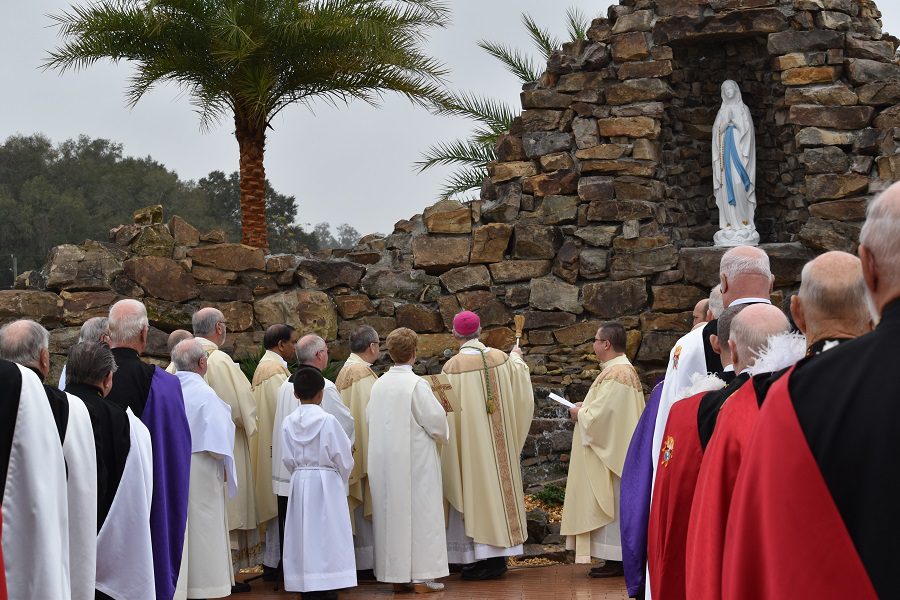 Bishop Noonan blesses Our Lady of Lourdes Prayer Garden on Feb. 10 at St. John the Evangelist Parish, Summerfield, just in time for Our Lady’s feast day. The project began Nov. 11 and was the longtime dream of Deacons Bob Esposito and John Rumplasch. (FRANK ELIM)

Nine years after a pilgrimage to Lourdes, France, Deacon John Rumplasch, his wife Michele, and Deacon Bob Esposito and his wife, Ann, finally saw the fruit of their inspiration, the Our Lady of Lourdes Prayer Garden. The garden, complete with a grotto, was blessed Feb. 10 by Bishop John Noonan at St. Mark the Evangelist Parish in Summerfield.

For Ann Esposito, the event was “bittersweet”. Her husband entered a memory care unit five years ago due to Alzheimer’s disease. “This is more than fruition of a dream. It’s his dream that he always wanted,” said Ann. “When he came to St. Mark in 2006, he saw the large piece of property we had and kept saying, ‘I wish we had a grotto.’” She explained that he always had a great devotion to Our Lady of Lourdes who appeared to St. Bernadette at a grotto in southern France. Water beneath the grotto had healing properties to which many miracles are attributed.

After Deacon Rumplasch’s Ordination in 2009, he recalled, “I felt I was missing something because I’m a convert – so I did not have an early devotion to the Blessed Mother. That’s one of the reasons the four of us went to Lourdes, to thank the Lord for my Ordination – to pray and get that devotion. And that’s what happened. I had a spiritual experience with the Blessed Mother.” The encounter affirmed his desire to help Deacon Esposito bring the beauty and sacredness of their experience to their parishioners. Not long after their return, Deacon Esposito became increasingly impaired, so Deacon Rumplasch took over the project.

He said, “The blessing was really great – emotional, spiritual. There were many people crying.” It is a tribute to Our Lady and to his friend who accompanied him on his journey of devotion. The following day, on the Feast of Our Lady of Lourdes, Father Tom Connery, pastor of St. Teresa Parish in Belleview, led a small pilgrimage of parishioners to pray the rosary at the grotto. “We’re hoping that parishioners from other parishes will come and use the grotto, admire it, meditate and pray,” Deacon Rumplasch added.

As for Deacon Esposito, Ann will bring him later this month to see the finished work and spend some time in the place he imagined more than a decade ago.

By Glenda Meekins of the Florida Catholic – February 12, 2019