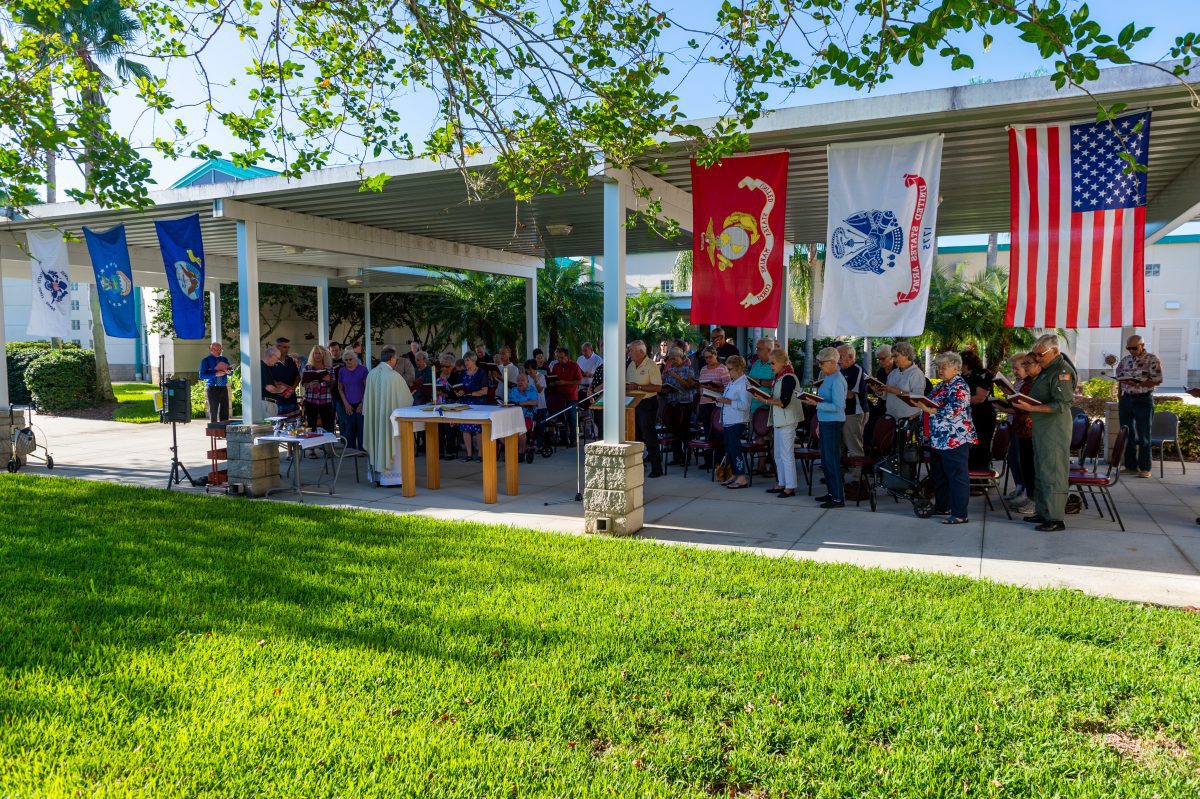 WINTER HAVEN | It was a gorgeous Florida day as veterans, family, friends and parishioners gathered at St. Matthew Parish’s Cemetery in Winter Haven to remember those lost in battle, our living heroes and those who will continue to fight for our freedom. Pastor Father Nicholas O’Brien celebrated Mass amidst flags representing the various armed services with the columbarium garden’s large crucifix as a backdrop and focal point—a vivid reminder of the cost of freedom. There were members of every branch present – Army, Navy, Marine Corp, Air Force and Coast Guard.

Visiting Deacon Warren Rutan of the Diocese of Rochester, joined the Marine Corp. at age 18, three years after the end of World War II. He served four years aboard the U.S.S. Albany CA 123 and became a sergeant. The 90-year old said the music during the Eucharistic celebration was particularly moving for him. As America the Beautiful rang through the garden, he reflected on the Father O’Brien’s homily which spoke of the gift of service. The deacon thought of the chaplain, a Catholic priest who often invited him to talk as Rutan passed by the mess hall. They would share and discuss, as the priest gently planted seeds of faith. Rutan converted to Catholicism many years later, just before his 19th wedding anniversary.

Others joined the military during very trying times. In 1969, Arthur Ratcliffe was 21 years old and just finished college. He knew he would be drafted for the Vietnam War and most men were drafted into the Army. Although he had no issues with the Army, he wanted to broaden his choices. “There was a tremendous demand for people who were eligible to become pilots in the Air Force and Navy. I actually applied to both… and the Air Force came through just before the Army drafted me.” Serving primarily in the U.S., Ratcliffe became a lieutenant colonel, a commander pilot and instructor for the AC 130 gunship out of Thailand in 1974-75.

“After spending 20 years in the service… I lost several people I was associated with and who were close to me in aircraft accidents. The opportunity to go (to the Mass) gave me the chance to think about those people and how much they gave up in order to serve in the military. It brings it home when you think about it in terms like that.”

Twenty-year veteran of the Navy, Skipper Deas, was a senior chief electrician (surface warfare). He said, he joined the Navy at age 17 “as an act of defiance.” Both his biological father and stepfather were former Marines and always spoke of the hardships of Paris Island. After serving two tours in Vietnam, Deas may have reconsidered which might have been the better choice. “I can appreciate these things a lot more because, when we came home from Vietnam, we were not welcomed. If they had been over there and had to send them in body bags home…,” he paused fighting back the emotion—“people would get the idea.”

Deas is a longtime parishioner at St. Matthew and said the Veterans Day and Memorial Day services mean a lot to him. Raised Lutheran, he converted to Catholicism 45 years ago when he married his wife, Emilie. Both are fighting cancer, making this year’s Veteran’s Day Mass acutely poignant.

“I never went to sleep without talking to the man upstairs,” said Deas, particularly recalling his days in the military. “Over there (Vietnam), you’re scared to death. You don’t sleep well at night because you’re not listening to your surroundings. You’re listening for what might be incoming… God was a big part of my life over there.”

As he took in the morning, he remembered 14 dear friends he lost and thought of the names on the Vietnam Memorial in Washington D.C. Before his illness, he thought he would retire and do charity work for wounded veterans and still hopes there is time for that. Meanwhile, he will continue to attend the services he can and is grateful that people still take the time to remember.

As the Mass ended, Father O’Brien read the names of those veterans inurned in the columbarium. “Then the congregation called off the names of even more service personnel that they knew,” noted Deacon Rutan. Voices raised singing the National Anthem. Oh, beautiful for heroes proved, In liberating strife, Who more than self their country loved, And mercy more than life!

By Glenda Meekins of the Florida Catholic  November 15, 2019