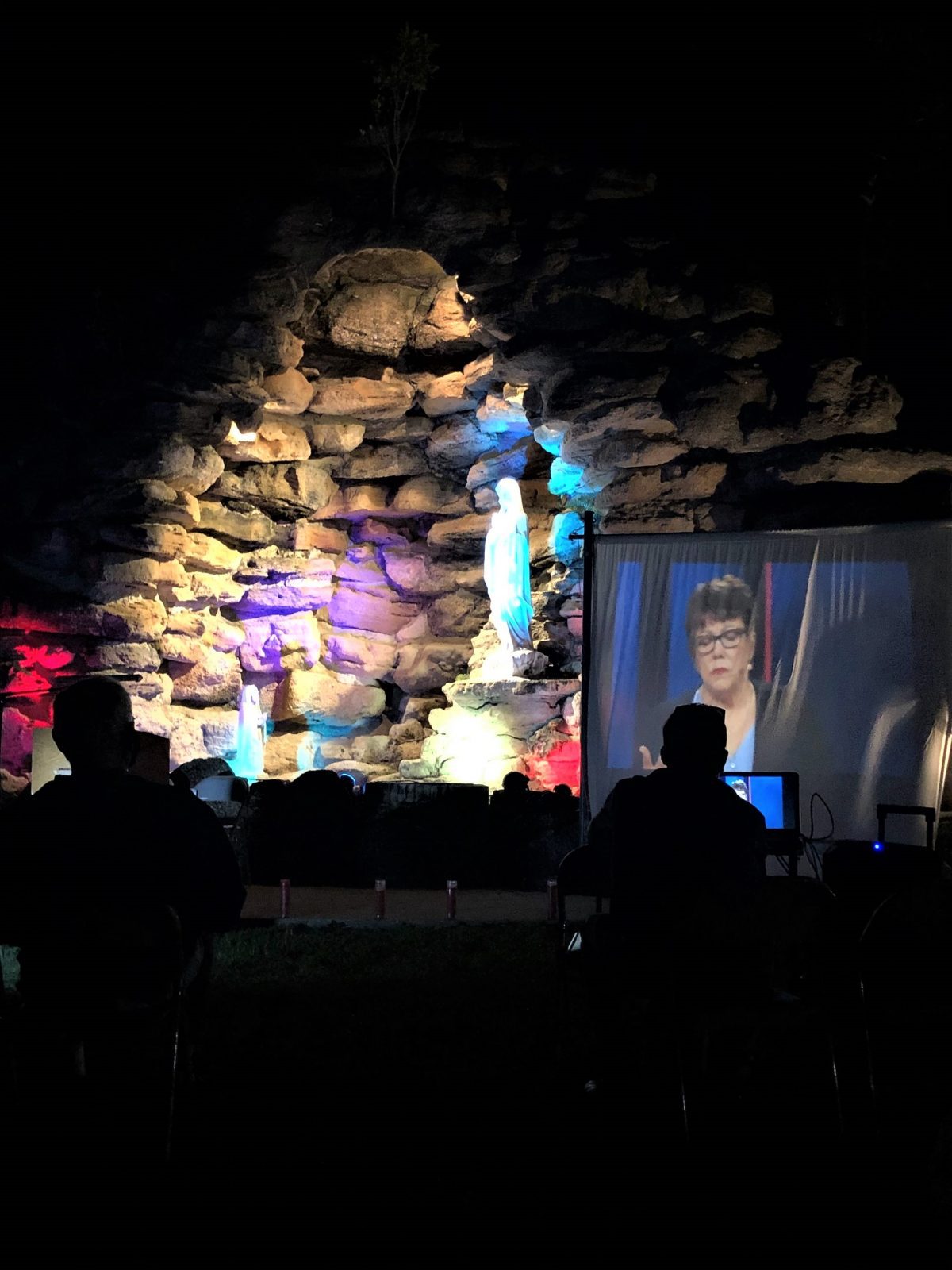 Parishioners at Our Lady of Lourdes in Daytona Beach gather in the parish’s Marian Grotto, socially distanced, to lview video testimonies from a former murder trial juror and death row exonerees during Cities for Life. The annual event encourages the abolition of the death penalty. (COURTESY)

DAYTONA BEACH |An estimated 50 people attended Our Lady of Lourdes Parish Cities for Life at the parish’s outdoor grotto Nov. 30. The crowd gathered under tents to learn about Florida’s history with the death penalty, hear testimonies, and pray for a culture of life.

The multimedia event included a video of the Ted Talk by Lindy Lou Isonhood, a former juror who served on a murder case in 1994. She spoke of her experience and how it altered her perspective on the death penalty. There were also video testimonies from Executive Director of Floridians for Alternatives to the Death Penalty, Mark Elliott, and from death row exonerees, Herman Lindsey and Clemente Aguirre.

Our Lady of Lourdes Parish has participated in the Cities for Life Movement to abolish the death penalty since 2015 and the faithful regularly stand outside the state prison during executions to pray for the convict, victim(s), and his or her family.
According to a report from the Florida Conference of Catholic Bishops, each November 30, communities across the globe participate in International Day of Cities for Life, Cities against the Death Penalty. The date marks the anniversary of the first abolition of the death penalty on the part of a state, the Grand Duchy of Tuscany, on November 30, 1786. Specific efforts vary by location, but many cities take part by lighting up major historical, religious, or civic monuments. In turn, those illuminated monuments become symbols of a commitment to creating a world without the death penalty.

Spearheaded by the Rome-based lay Catholic community of Saint Egidio since 2002, more than 2,000 cities participate worldwide. Today, the top five nations carrying out executions are China, Iran, Pakistan, Saudi Arabia, and the United States.
Florida began applying the death penalty in 1827 with a respite from 1972-1979. After the botched executions of three death row inmates in the 1990s, Florida began using lethal injection as its execution method, instead of electrocution. In 2017, Florida statutorily abolished non-unanimous jury recommendations for death, requiring sentencing juries to unanimously recommend a death sentence before the trial judge may impose it.

Florida has had 30 individuals exonerated, more than any other state.

Pastor of Our Lady of Lourdes, Father Phil Egitto, noted the U.S. Department of Justice ended a 17-year hiatus on federal executions in the summer of 2020. Since then eight men have been executed and five more are scheduled to be executed before Jan 20th. Recalling the words of Pope Francis, Father Egitto said, “We needed Cities for Life now, more than ever, to speak loudly and boldly that capital punishment is an offense ‘against the inviolability of life and the dignity of the human person, which contradicts God’s plan for man and society’ and ‘does not render justice to the victims, but rather fosters vengeance.’” He added, “This is why even during COVID days we saw it as critical to stand boldly for our faith.”

Father Egitto rang a bell for each of those executed in recent months and for their victims and families as well as those scheduled for execution through Jan. 20 and prayed for an end to bloodshed. “We hear God’s call to us to be instruments of His compassion, His forgiveness, His mercy… instruments of healing and love, of true justice,” he said.

Commenting on the many executions in recent years, Father Egitto noted, “Without question, this unprecedented execution spree makes clear the system is in need of abandonment of the death penalty or at least a major overhaul.”

For a full recording of the event or to watch speakers’ videos, go to https://www.facebook.com/ourladyoflourdesdaytona/videos/188820419563426

By Glenda Meekins of the Florida Catholic, December 1, 2020