Parishes host Cities for Life against the death penalty 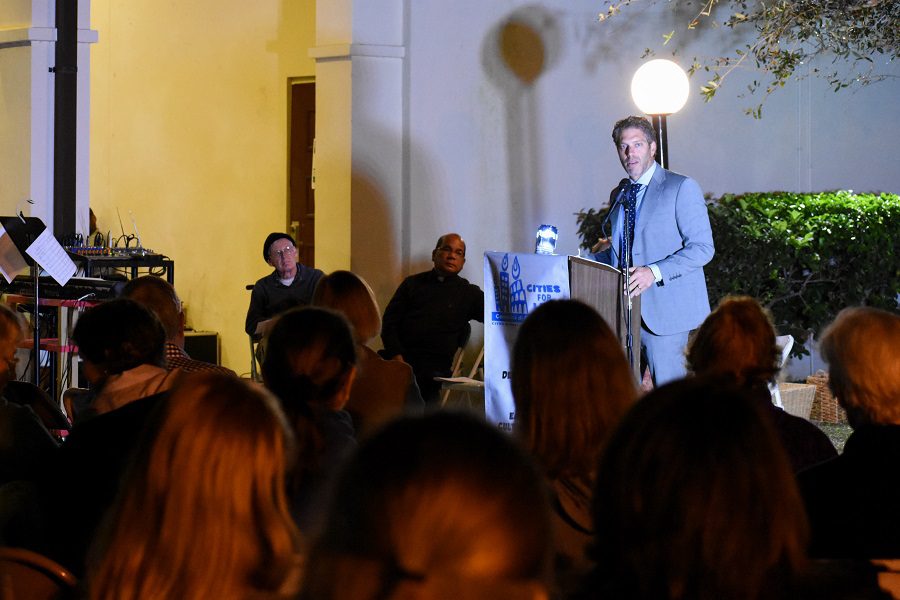 COCOA BEACH | Parishioners of Our Saviour Parish in Cocoa Beach gathered together with Christians from throughout Brevard County Nov. 30 for the first time in commemoration of International Day of Cities for Life, Cities Against the Death Penalty. Our Saviour now joins more than 2,000 cities and parish communities in 80 countries that celebrate this day, including Our Lady of Lourdes Parish in Daytona Beach

As dusk fell, the crowd of more than 50 prayerfully soaked in beautiful music before the grotto of the Blessed Virgin Mary. Our Saviour pastor, Father Percival “Val” DeVera said, “As a Catholic church, we are pro-lifers. We promote life. We protect life. This gathering helps people realize how sacred life is and that only God has the right to take life.”

The worldwide movement to abolish the death penalty began in Italy with the Community of St. Egidio. Events are held Nov. 30, the anniversary of the first abolition of the death penalty in 1786 in that country. The Cocoa Beach event is fruit of the new Social Concerns Ministry initiated by parishioner Anne Goodin. After attending several death row executions at the Florida State Prison in Starke with former parish pastor, Father Fred Ruse, Goodin, her husband, Tom, and several others wanted to educate parishioners on issues of social justice.

After attending the Cities for Life event at Our Lady of Lourdes last year, the group decided to become involved and offer the awareness event at Our Saviour with the help of Deborah Shearer, director of Advocacy and Justice at Catholic Charities of Central Florida, as well as Florida Alternatives for the Death Penalty.

Shearer noted, “Pope Francis has, most recently, updated the Catechism of the Catholic Church (2267) to state that executions are ‘contrary to the Gospel’ because it is the intentional taking of a human life. In this era of the availability of life in prison, especially in Florida, there is no legitimate reason for the death penalty. In fact, 28 innocent people on Florida’s death row have been exonerated, most recently this month, reinforcing the inconsistency and injustice of this practice.” She added, “Consequently, the Church teaches, in the light of the Gospel, that ‘the death penalty is inadmissible because it is an attack on the inviolability and dignity of the person’, and she works with determination for its abolition worldwide.’”

The fact was also noted by guest speaker, Michael Pirolo, chief assistant public defender for Brevard County and parishioner of Ascension Parish in Melbourne. He quoted several staggering numbers: 1,486 individuals have been executed in the U.S. since 1976…. 96 in the state of Florida—21 this year alone in the U.S.; 343 inmates are currently on Florida’s death row.” He added, “There have been 164 death row exonerations in our country. That means these people were found completely innocent. We had the potential of executing innocent people.” Four more executions are scheduled this year.

“We must acknowledge that mistakes have been made and will continue to be made as long as we continue to execute people,” said Father Phil Egitto, pastor of Our Lady of Lourdes Parish in Daytona Beach. “At our services, we also pray for the victims we are about to create, as a state. José Jimenez (whose execution is set for Dec. 13) is someone’s son and we are about to make a victim out of his mother by committing a state sanctioned murder.” Father Egitto does not exaggerate that point. On the inmate’s death certificate, cause of death is officially listed as homicide.

Speaking for these victim survivors was Juanita Perez, the family member of three murder victims in 2006. Perez said, “It (the death penalty) does not bring closure. It does not bring my family members back. (Killing a death row inmate) just adds to the (number of) survivor victims.” Her families’ case took an agonizing 11 years to prosecute.

Justin Heyne, Perez’s families’ convicted killer, was given the death penalty for two of the crimes, and a life sentence for the other. This year, Gov. Rick Scott signed a bill requiring a unanimous vote in death penalty cases after the Florida Supreme Court ruled the practice of majority vote as unconstitutional. The laws means Perez’ case will undergo a new sentencing phase.

“Conversion and repentance is what we’re about. Our endeavor should be to protect that ground to make sure it is possible,” said Father Ruse who accompanied death row inmate Rigoberto (Ricky) Sanchez Velasco for five years and to his death. “We should be most vocal and most engaged in pursuing the abolishment of the death penalty.”

“We are so grateful that the parishes around the diocese are raising the visibility of this issue each year through the Cities for Life in solidarity with churches and cities around the globe on Nov. 30,” Shearer said. “Next year, we hope at least one parish in each of our counties will participate. It is important to educate Catholics on the Church’s teaching on the death penalty as it denies the dignity and sacredness of the life of a person and dehumanizes life for all of us.”

She added, “We pray for and look forward to the day when executions are a disquieting memory in Florida’s history.”

By Glenda Meekins of the Florida Catholic – November 30, 2018