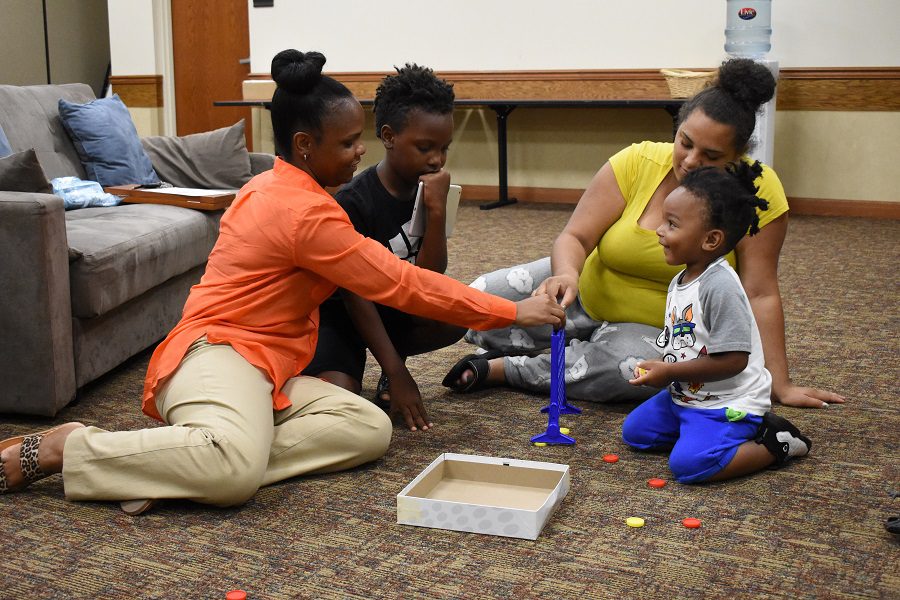 WINTER PARK | It’s Nicole and Keith’s second night at St. Margaret Mary Parish in Winter Park. After sleeping in a park for the past three months with their two teenage daughters, the family gathers for a meal around a table of volunteers and Keith offers a prayer of gratitude. Thanks to Family Promise of Greater Orlando and one of 11 congregations that offer shelter for their Interfaith Hospitality Network, Nicole and Keith say things are looking up.

Family Promise began in 1986 when a woman stopped to give a sandwich to a homeless person in New Jersey. The person asked to share her story and her tale sparked an idea that is now a nationwide organization. Two Winter Park parishes are part of Family Promise’s efforts to combat homelessness in the area. St. Margaret Mary is almost a 20-year veteran. Sts. Peter and Paul Parish just started.

Judy Allen began at the parish bringing meals. She progressed to working a few shifts, and now serves as a coordinator. The parish provides shelter four times per year. “It’s such an opportunity to fulfill our Christian duty,” she said. “We are called to be servants. We are called to take care of people, to reach out to people.”

That is what Nicole appreciates the most. “This is what we needed. The people here are absolutely wonderful. They’ve been so inviting and caring,” she said with a broad smile. That is what sustains her. As a person of faith, she believes there are no coincidences. She says, “There were days in that park I would ask God for a breeze and it would almost knock us over. I believe in my Father and I know he’s going to help me, just not on my scale. It’s His time frame.” For the next 30 days, her family will move to another shelter each week until they can find a permanent place to live. They may remain in the program up to 90 days, depending on their circumstances.

Nicole says moving week to week is a welcome option over sleeping on a cement bench. It is a life her family never expected. She and her husband had good jobs and lived in a two-story home before they gave it up and moved to California to nurse her ailing mother. Burdened by a bed bug infestation, she moved her bed-bound mother to another location while her family remained living with her brother, an addict. A little over a year later, they decided to return to Florida. A friend was to provide accommodations and Nicole was expecting to get back into home health care. It was early March 2019. When they got to the door, the friend said the home was no longer available, so they rented a hotel room for three weeks until they ran out of money. They spent the next three months sleeping on park benches in West Orlando.

After begging for food and relying on the kindness of strangers – a small church, fast food restaurants that helped them and the Publix manager who often saved food for her family and even drove by the park from time to time to check on them – her husband found Family Promise. They took the first shower available in weeks. It was a welcome change after going into the bathroom at the Dollar Store to wash up at the sink. Nicole’s children were embarrassed. They went through rain, cold and heat on those park benches. Nicole noted, “You would be appalled to know how many families like us we saw out there.”

Katy Ann White and her five children were one of those families two years ago. “When I joined the program, I was so broken,” she said. After a complicated birth and illness, she lost her job, ran out of money and took to the streets with her children selling candy bars to make ends meet. “Anyone can fall from the top of a mountain to the bottom of the sea,” says White. “They (Family Promise) teach you how to avoid going through that by teaching you how to budget, how to manage, cut costs, so you don’t have to go through that situation again. Family Promise is a program, but more than that, it’s the people who work with them and care that make it so special,” she said.

In 2018, the Department of Education identified 12,000 homeless students in Central Florida public schools, not including people in transitional housing, shelters, or unlivable conditions. Every January, the Department of Housing and Urban Development (HUD) takes a “Point in Time” (PIT) count of homeless persons on the street on one given day. In Orange, Osceola, and Seminole Counties, the 2019 PIT count was 2,010. Tia Aery, executive director of Family Promise of Greater Orlando, which covers the tri-county area, says, “It is a serious under calculation.” That is why she and her staff work hard to help highly motivated clients get off the streets. The shelter program helps roughly 22 families per year. Through their rapid rehousing service, another 75 families are able to stabilize their lives and obtain permanent housing. “We are trying to serve the neediest families first,” she said.

She admits, “There’s a big learning curve, particularly for the coordinator or point person,” but Family Promise provides training. “A lot of congregations find, if there’s a will, there’s a way,” she notes. To serve four families (or a maximum of 14 individuals in a given week), all that is required are churches with “a heart for the mission”. She says, “Most congregations can find the space. When St. Margaret Mary started hosting, they didn’t have a fancy facility. They had a parish hall and they set up tents where the families stayed.” The only requirements are a private sleeping area for families, bathrooms where they can wash up, a communal area where families can eat and the children can play, and volunteers to provide meals. Clients can shower at Family Promise Day Center in Winter Park, if needed. The organization also provides transportation to and from the shelter.

June 9-16, Sts. Peter and Paul hosted for the first time. They had three families sleeping in classrooms transformed into bedrooms, using the parish hall for meals and fellowship. “We were blessed with 46 volunteers, several of whom came more than once,” said Franciscan Friar Minor, Brother Paul Santoro, director of outreach ministries. Many other parishioners donated linens, towels, toiletries and food. “We had a great first experience of hosting … I was edified by the number of parishioners who stepped forward … I think that for all the volunteers the most rewarding part of the week was getting to spend time with the families and getting to know them and share with them.” He added, “The highlight for many of us, and the reason why this is all worthwhile, is that one mom expressed how grateful she was for this program.” She said, “Last night was the best night’s sleep I’ve had in eight months. My son and I have been living out of my car.”

“Being able to offer a safe and secure place to sleep with meals and community is a great gift to be able to offer our homeless sisters and brothers. ‘When I was a stranger you welcomed me,’” he said quoting Matt. 25:35.

St. Margaret Mary volunteer, Judy Allen sums it up well. “It comes full circle. We were all created to be servants of others. We do it in a lot of different ways. It’s beautiful to see.”