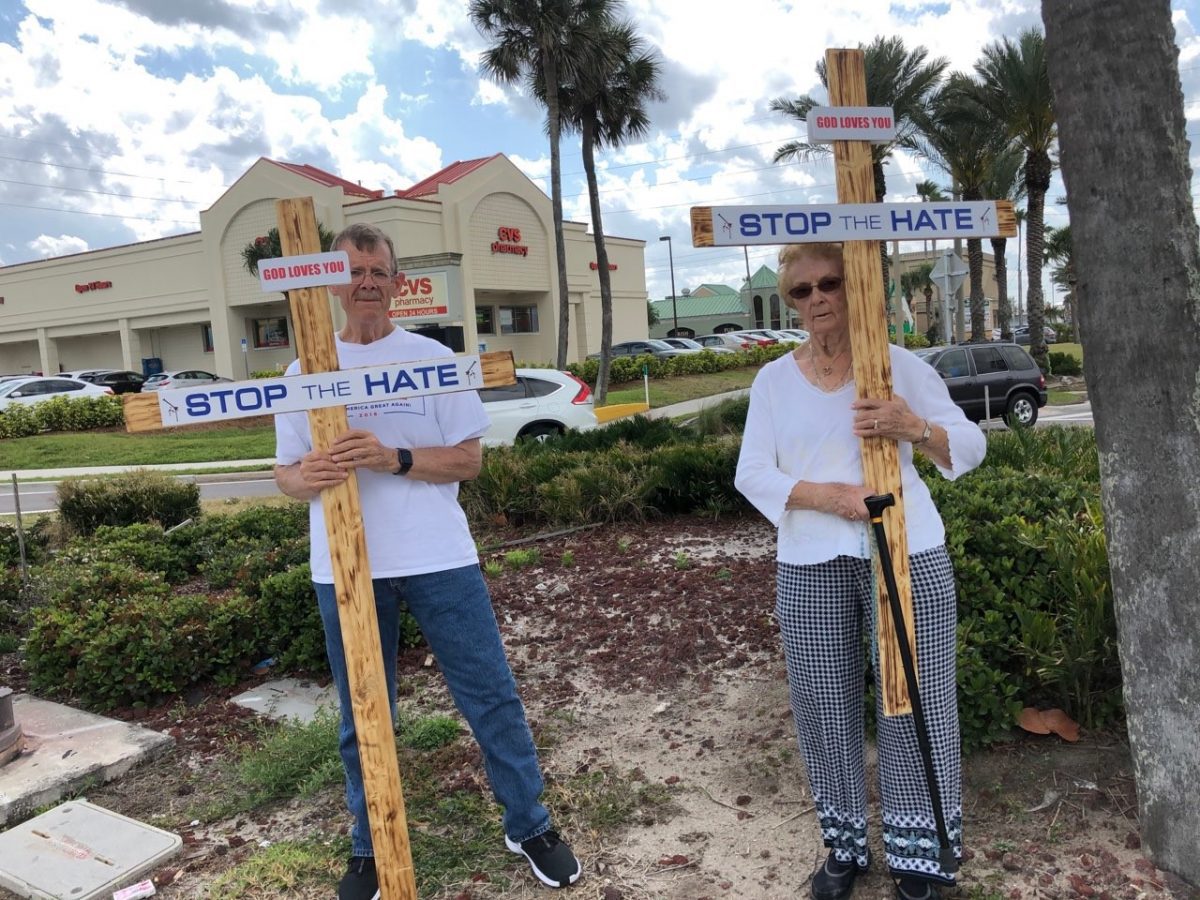 Gene Rasmussen (left) and Cecilia Sloane of Our Saviour Parish in Cocoa Beach stand in the median at the intersection of Hwy. 520 and A1A in Cocoa Beach for an hour on most Fridays, in the hopes of changing hearts from hate and division to love and inclusion. (COURTESY)

COCOA BEACH | Cecilia Sloane, parishioner of Our Saviour Parish in Cocoa Beach, has seen a lot in her 89 years, but the election of 2016 and its “vitriolic” climate of division motivated her to do something she had never done. A quote from Thomas Merton provided the inspiration, “The antidote to hate is knowing God loves you.”

Most Fridays you can find Sloane and some friends standing at the intersection of S.R. 520 and A1A, holding signs that read, “God loves you – Let him in” and “God loves you – Stop the hate.” She was moved by the story about a bishop who carried a cross through the streets of Chicago on Good Friday that read, “Stop the killing.” Sloane thought she would do the same thing in Washington, D.C.

Without the means and through much prayer, she asked another parishioner, Dave Watson, to make her a cross. She shared her idea with friend, Gene Rasmussen, who served with her on the Social Concerns Committee and promised to stand by her. Then, she asked God for a sign. When she went to pick up the cross, she learned Watson had made two of them. In early March, they began their unified front, praying the rosary and the Chaplet of Divine Mercy.

The week of Palm Sunday, Sloane is even running an ad in Florida Today’s religious section, a prayer that encourages people to love. An excerpt reads, “We ask the Holy Spirit to create new hearts in us. Hearts that will accept that love. Hearts where there is no room for hatred and division.”

“You can’t talk to people anymore without someone getting upset,” said Rasmussen. “I hope this brings us together… We can let God pull us together rather than let hatred pull us apart.” It was the love of the parish that drew him in after his wife passed in 2010. He converted to Catholicism in 2012.

Both hope their efforts will make a difference. Sloane said they stand to fight, “The hate we have allowed to infiltrate the hearts of our nation and that is slowly eroding our moral fiber; the hate that chews up a soul and eventually will destroy us if we allow it; the hate that can only be defeated by a firm belief that we are loved by our heavenly Father despite our sinfulness and unworthiness.” She added, “I hope some people will see this and take up their own cross and carry on the ministry and that hearts will be changed.”