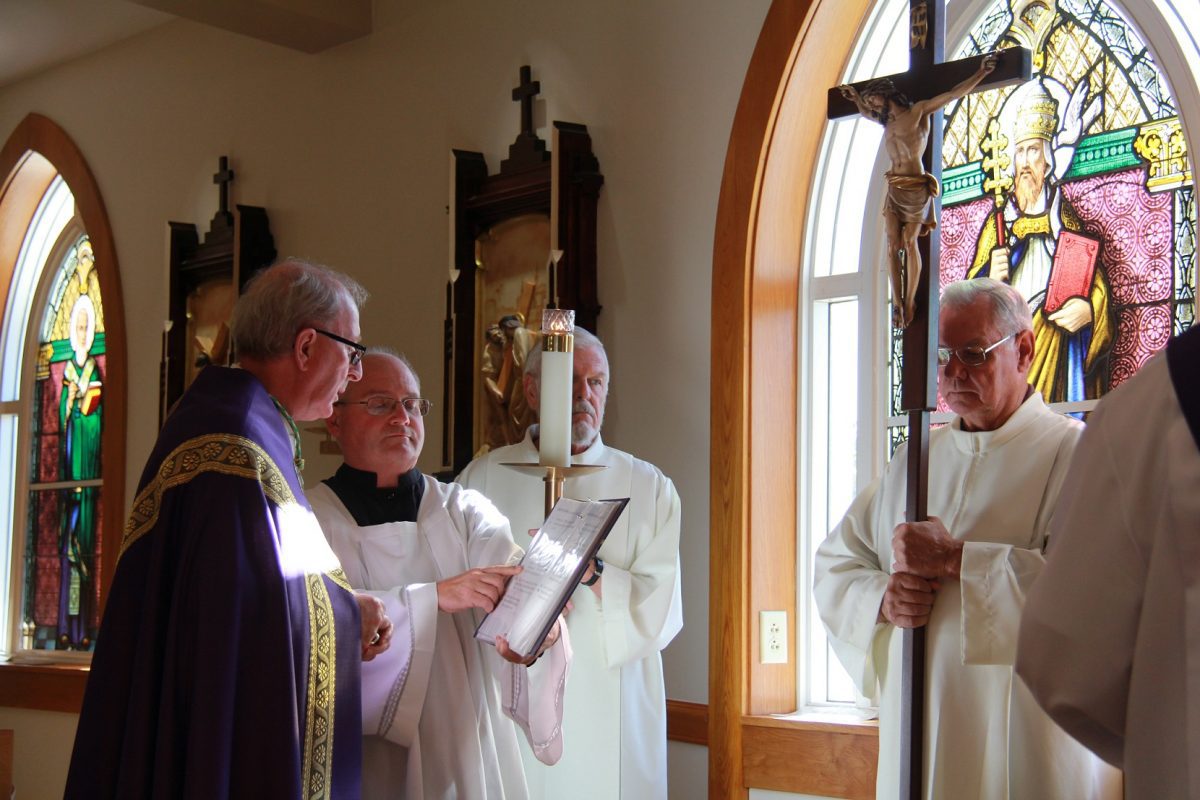 Bishop John Noonan prays while leading Stations of the Cross at St. Mark the Evangelist Parish in Summerfield. The practice of Stations of the Cross is an ancient tradition dating back to the fourth century when pilgrims traveled to Jerusalem to walk in the footsteps of Jesus to the cross. The parish’s historic stations came from a 100 year old church in Penn. and were restored by parishioners. (GLENDA MEEKINS | FC)

A traditional Lenten practice throughout the world is the devotion to the Stations of the Cross. On Friday, March 17, Bishop John Noonan led the Stations of the Cross with parishioners of St. Mark the Evangelist Parish in Summerfield. As music marked the end of each station, the pilgrims moved along the figurative Via Dolorosa, or “way of tears” retracing the footsteps of Jesus Christ on his way to be crucified.

Origins of the practice can be traced back to pilgrims traveling to Jerusalem to walk the Via Dolorosa. Later, in the twelfth and thirteenth centuries, it became more elaborate and concrete with “stations” marked by crosses placed around the city, church or cemetery, retracing Jesus’ walk in Jerusalem. The 14 stations most Catholics are familiar with were first seen in the 16th century in Spain. The tradition was then spread by Franciscans who adopted the devotion and promoted it and it was recognized as an official devotion by Pope Clement XII in 1731.

Parishioner Catherine Miller has been practicing the devotion for 66 years. Introduced to the stations in the fourth grade at Catholic school, Miller says it has become an emotional experience for her as she has gotten older.   She believes that life experience intensifies the meditation. Each week, Catherine has to endure a painful medical procedure. She said, “I used to scream because it hurt so much, but now I take the pain and offer it up because He took it for us and I offer it up to Him.”

She said meditating on each station, “…makes me think and remember why He did it for us. I think of the guilt of having sinned and it’s a reminder of how He carried the weight of the world for our sins. I get very emotional with it. I feel the guilt that He had to carry—everybody’s sin—and that He had to die in such a tremendous, horrific way so that we would be without sin. That’s what draws me there.”

Although most commonly practiced during Lent due to the focus on Christ’s passion, death and resurrection, the Way of the Cross is a devotion that can be used for meditation any time during the year.

Bishop Noonan concluded the stations with the Benediction with the Blessed Sacrament in a monstrance, calling to mind Jesus’ resurrection and leaving the faithful with a sense of hope.

“I may not have been in Jerusalem on the Via Dolorosa,” said Miller, “but I feel like I walk it when we do the Stations.”