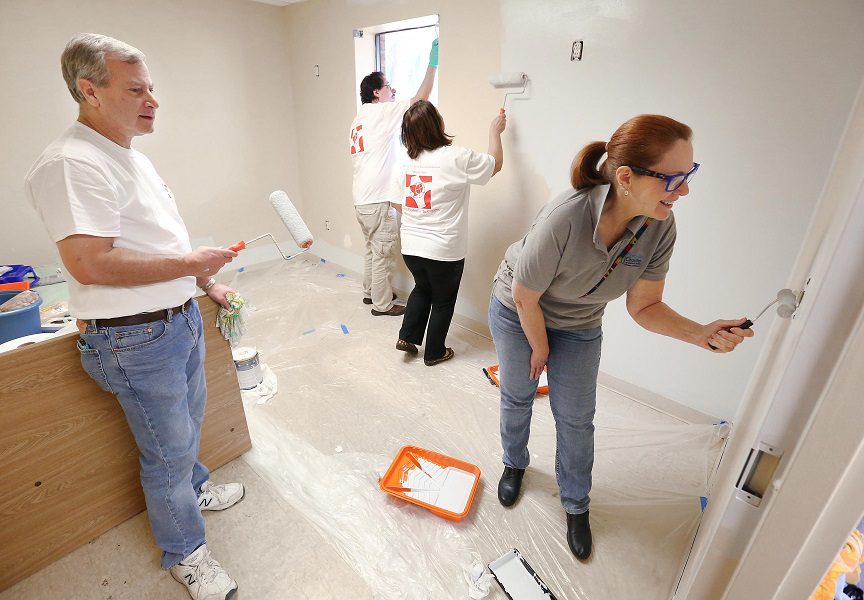 After making a few suggestions, Father Bluett’s face lit up as he explained how the resident rooms at Pathways to Care needed an extreme makeover or facelift. Pathways to Care, a program of Catholic Charities of Central Florida, is a nonprofit respite care center dedicated to providing health, housing and hope to Central Florida’s homeless veterans and non-veteran men and women in need of temporary housing as they recover from an acute medical illness or injury.  After many years and many residents, the rooms were in need of repair and refreshing. The associates agreed to take on the project of creating, not only a safe place for the residents to heal, but a beautiful and welcoming space as well.

“The project planning began in early December 2016,” explained McGinty. “We met with Dawn Zinger, administrator of Pathways to Care, with clip boards in hand and did a complete assessment of each patient room. There are a total of 31 resident rooms, with many housing two adults per room. Dawn was clear on what was needed.”

Starting with two rooms, the preparations began Friday evening with a team of six associates moving furniture, washing the walls and filling the many holes and divots from years of residents making the space their temporary home.  Early Saturday morning after a group prayer, a group of ten associates washed windows, scrubbed furniture, cleaned blinds, repaired closets and furniture, sanded and painted walls, scraped and scrubbed the floors and moved the furniture back into the rooms.  They installed new bulletin boards, wall lighting, wall clocks and large heavy-duty hook racks in each room to complete the makeover.

“As the work was being completed, residents and employees stopped by to see the progress and offer words of appreciation,” said McGinty.” One resident asked several questions about the paint and then shared that he had at one time worked at a local big-box store in the paint department and wanted to share his expertise.  It gave us as associates of the Blessed Sacrament Congregation the opportunity to share our gifts just as St. Peter Julian Eymard has asked us to do – being Eucharist to others.”

Funding for the ongoing makeover project is being shared by the associates and St. Stephen Parish. The next extreme makeover day is scheduled in April when they will work on two more rooms at Pathways to Care.