Parishioners Send Prayers and Support to Haiti in Wake of Hurricane 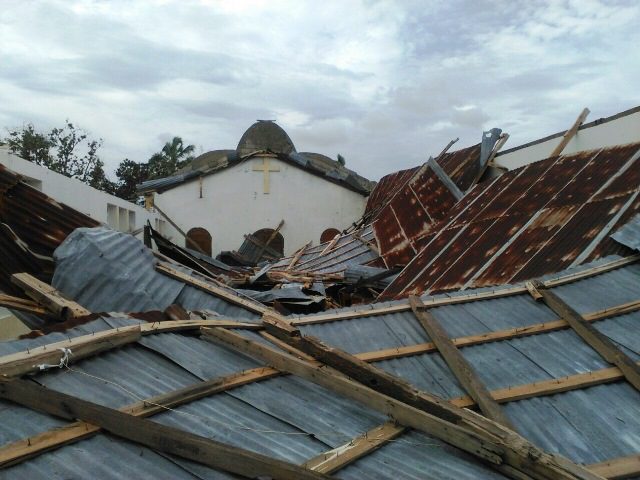 ORLANDO |As his own family was preparing for Hurricane Matthew to hit Florida’s coast, Matthew, a sixth grader from Holy Redeemer Catholic School in Kissimmee was troubled. “I just had a feeling inside of me that something was wrong,” said Matthew. “Then I checked the news and saw how Haiti was being devastated and was still recovering from something that had happened recently.” He said referring to the 2010 earthquake that claimed 220,000 lives.

So he went to his computer and emailed Holy Redeemer assistant principal Karen Tinter. As a member of Beta Club, an honor society on campus that does service projects for the community, he had an idea of how to help raise money to help the small Caribbean island.

“I was so touched,” said Assistant Principal Karen Tinter. “They’re on hurricane break and he emailed me with an idea to help Haiti.”

Matthew is not alone. Schools and parishes throughout the Diocese of Orlando are all joining in an effort to bring aid and comfort to Haiti and its people. Bishop John Noonan called for a second collection Oct. 15-16 with funds being sent to Catholic Relief Services, to help hurricane relief in Haiti.

At Holy Redeemer, Matthew and his peers are seeking to raise $1,000. Students can wear any kind of sneakers and socks with a donation of $2 or more. The school will partner with the efforts of St. Margaret Mary Catholic School in Winter Park, which works directly with a mission in Jacmel, Haiti.

St. Margaret Mary principal Katherine Walsh said, “The parish with whom we partner (Our Lady of Perpetual Help) has expressed what their greatest needs are:  shelter and food. They lost their crops, their animals and structures. We have already begun to wire some money there.”

The school held a prayer service and students participated in a spirit t-shirt day to raise money. Two families had students who set up a lemonade stand and raised $240. Walsh said the proceeds will help buy crops and animals as many perished with the heavy rains.

“We’re blessed that we didn’t get hit that hard in Central Florida,” Matthew said.  “The fundraisers will help them see that people care about them and that they can recover once again.”

The Diocese of Orlando has a large Haitian community with nine parishes that celebrate Mass in Creole. Many parishioners have friends and family who have been affected by the storm. Father Nazaire Massillon, parochial vicar of St. Catherine of Siena Parish in Kissimmee, is from northern Haiti. Although his family fared the storm well, his friend, Father Charles François, pastor of Sainte Catherine de Sienne, in the diocese of Anse-à-Veau in the south was less fortunate.

Father Massillon met Father François through a relative several years ago. Since then, the priests have kept in touch. On the morning of October 6, Hurricane Matthew swept through the southern town of Arnaud, among the areas hardest hit along the southeastern coast of Haiti—just 118 miles west of Jèremie.

Leaving devastation in its wake, the hurricane took Father François’ home, portions of his church, leaving the altar and ambo thrown on the ground, and removed the roof and much of the interior of the parish school.

“I tried to help him,” said Father Massillon, explaining the difficulty in trying to send funds directly, due to the frequent diversion of funds that are then misappropriated. So he turned to diocesan aid efforts. “We need to trust the bishop’s efforts,” he said. “And of course, we pray for the people of Haiti.”

One of his parishioners and a fellow Haitian, Wilfred Tilus who is in diaconate formation, has friends and family in Haiti. He has not been able to reach his priest friend in Les Cayes, another devastated region, but he knows his brother-in-law’s home in Jèremie is gone.

After enduring one’s homeland being ravaged by natural disasters so frequently, one could ask what keeps the people of Haiti going? Tilus responded without hesitation, “The good thing about Haitians is that they are faithful people, regardless of their situation. They never let go. They keep praying, knowing that God is there with them and that He will always supply their need. Prayer is the best thing that keeps them alive.”

“For our part,” says Tilus,“We keep them in prayer. God is a good God and will take care of them.”