Among the 90 immigrants from 37 different countries receiving their U.S. Citizenship, April 22nd, was pastor of Nativity Parish in Longwood, Father Augustine Clark. 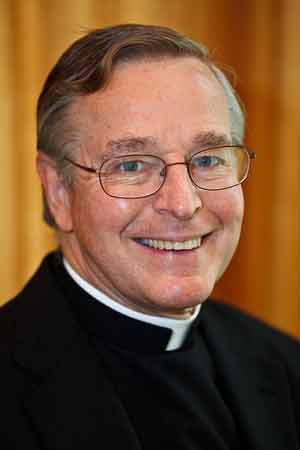 Among the 90 immigrants from 37 different countries receiving their U.S. Citizenship, April 22nd, was pastor of Nativity Parish in Longwood, Father Augustine Clark. After receiving notice that his application was approved, as the only priest of the parish, Father Clark knew he had to keep the event short and simple.  “I received the letter 5 days before the (naturalization) ceremony,” says Father Clark.  “I didn’t even have the chance to get a picture because I had to rush out of there as soon as it was over, to get to a wedding rehearsal.”

The following weekend, he announced his citizenship to the parish with a sense of humor, saying “I told them, ‘people have been complaining about the English pastor….well, don’t worry, he’s gone’.”

“It was very impressive, the variety of people that were there,” remarked Father Clark about the ceremony. “That’s what I love about America, the Melting Pot.  We take everyone.  The only place you get that same variety is in the Catholic Church, we have that same melting pot too.”

Father Clark started out his religious life as a Benedictine monk in England, his home country, where was born in Warwickshire, near the birthplace of Shakespeare.  He began teaching and eventually became headmaster at a boarding school run by his order.  In 2001, retired pastor of St. Theresa in Titusville, Father John Murray, asked Father Clark to assist at his parish during vacations.  “It was a wonderful experience for someone like me, who had never done parish work before.  Up to this point, I had never baptized, anointed or presided at a wedding before,” recalls Father Clark.

For the next three years, Father Clark traveled from England to assist during vacations until Father Murray suggested that he help fill the need for priests in the Diocese of Orlando, permanently.  Father Clark met with Bishop Norbert Dorsey, and with the approval of his order, Father Clark applied for a religious workers visa with the assistance of Richard Logue at Catholic Charities of Central Florida.

“Immigrating to this country as a religious worker is a very long process.  It takes many steps and many years to first, gain temporary work status, then permanent residency, and eventually U.S. citizenship,” explained Logue.

Father Clark’s application was approved, and in September 2004, his pastoral assignment at St. Theresa began.  “It was my first weekend at the parish when Hurricane Francis hit Titusville.  We didn’t have power for a week.  Then two weeks later, Hurricane Jeanne came.  It was a very interesting introduction to life in Florida,” he says.

Afterward, Bishop Thomas Wenski moved him to Holy Cross in Orlando, where Father Clark, having been trained as a priest in Italian, began learning Spanish, eventually celebrating Mass and preaching in the language.  After three years, he was assigned to St. Charles in Orlando from 2008-2012, and in August of 2012, he became pastor of Nativity.

Noemi Guzman, manager of the Immigration Services at Catholic Charities of Central Florida assisted Father Clark in applying for permanent residency, also known as the green card, which was approved in 2009.

“The Immigration Department at Catholic Charities has been assisting religious workers for over twenty years.  We are thankful to be in a position to guide our priests, sisters, and seminarians through this process,” says Guzman.

“Wherever I have gone, people have been enormously friendly.  I love the pastoral piece of what I do; counseling, hearing confessions, and saying Mass every day,” reflected Father Clark.  “It’s been 12 years now, and it still feels new and exciting.”