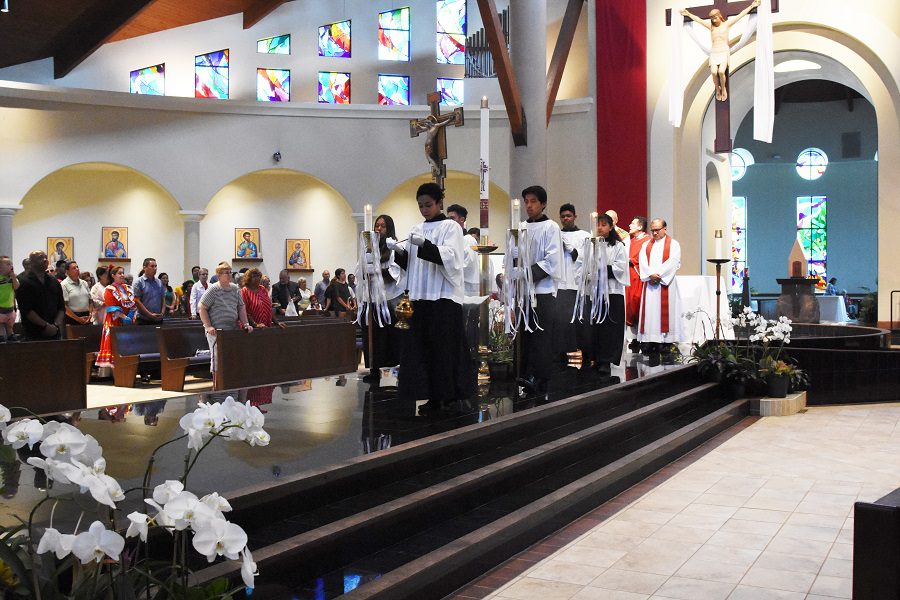 Swaths of red fabric adorn either side of the tabernacle, representing “tongues of fire” and the coming of the Holy Spirit on Pentecost at Sts. Peter and Paul Parish, Winter Park. (GLENDA MEEKINS)

WINTER PARK | Welcoming people of all nations, Sts. Peter and Paul Parish in Winter Park was draped in swaths of red fabric symbolizing the descent of the Holy Spirit in tongues of fire at Pentecost. The celebration of Mass included intercessory prayers spoken in 14 different languages on June 8 and 9, recalling Scripture, “And they were all filled with the Holy Spirit and began to speak in different tongues, as the Spirit enabled them to proclaim,” (Acts 2:4). A multicultural celebration followed with food from 21 countries. The Mass and meal marked the end of the Easter season.

This is the third year the parish celebrates Pentecost with a multicultural gathering. More than 250 people attended for food and fellowship. The feast included jerk chicken from Jamaica, egg rolls from the Philippines, humus from Israel, scones from Ireland, and even hot dogs and hamburgers from the U.S. There were representatives from Vietnam to Nigeria and various African countries. Most of the food was homemade and many hosts were dressed in traditional costumes from their respective countries. 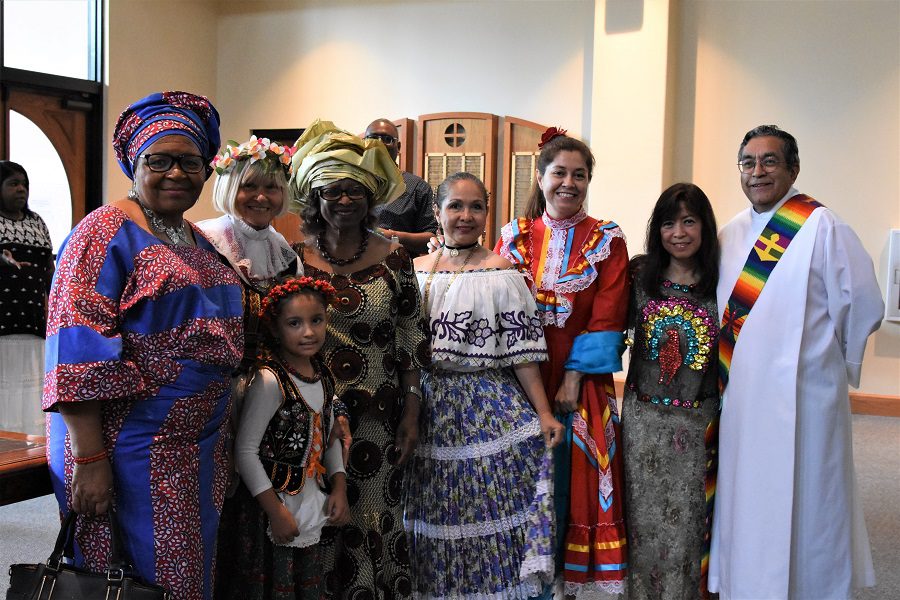 In his homily, Father Derk Schudde, pastor of Sts. Peter and Paul, reminded those gathered that the Holy Spirit was breathed into them so that they too might proclaim the Good News. “God is counting on you,” he said.

Mabel García, who represented Cuba took it to heart. “For me it is very important to represent my country in any place, all over the world, because I feel proud to be a Cuban,” she said. “I am even more proud if I can serve voluntarily in the community of God, bringing and sharing my culture to our parishioners during Pentecost.” She added, “The Holy Spirit is present in our festivity. ‘For where two or three gather in my name there am I with them,” (Matt. 18:20)—so it doesn’t matter if people are from different countries or speak different languages. The language barriers are imposed by humans. The language of the Lord is only one and His love is infinite.”

Father Schudde noted, “The sign of the spirit is about the sign of unity. The speaking in many languages at Pentecost was a sign that everybody could come together, know and understand the goodness of the Lord. Obviously, as a multicultural parish, we represent, not only diversity, but unity in the goodness of the Lord. Especially as we celebrate the birthday of the Church, where it comes together as one, we come together as one family, no matter where we were born in the world, highlighting the important fact that we are one in the Lord.”