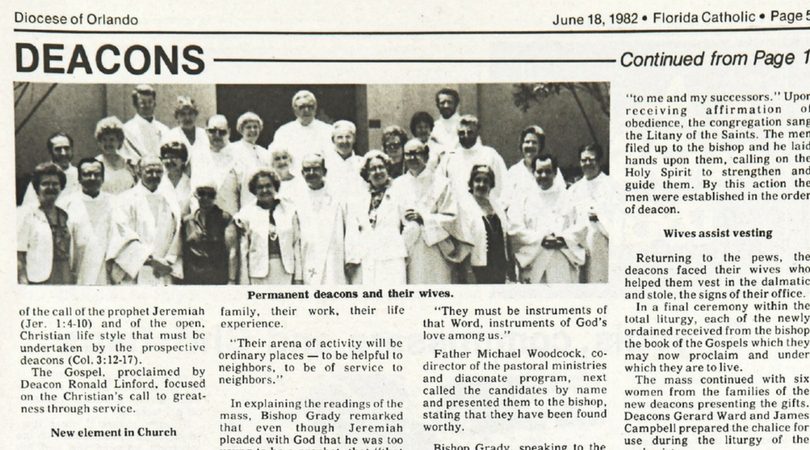 Today there are more than 18,000 deacons in the U.S. and 197 in the Diocese of Orlando. This year, 60 men have applied to be considered for the sacred Order of Deacon—a record for the diocese. Yet this has not always been the case. As we celebrate the 50th anniversary of the re-establishment of the permanent diaconate in the United States, it is worth taking a look at the diocesan diaconate program, from its modest start to its current strength and mission.

To do so, one must first look back upon the story of how the first seven deacons were selected and why. The story found in Acts 6 recounts, as the faithful grew the apostles could not keep up with the growing needs of the people. Widows and orphans were being neglected. Thus, the diaconate was born and flourished until the Middle Ages when confusion erupted over the roles of priests and deacons. As priests took on more duties, the role of the deacon diminished and almost vanished completely. During World War II, a group of men in the Nazi concentration camps revived the idea that had been set aside at the Council of Trent, enlivening the discussion to bring back the diaconate. As a result of their work after the war and fueled by a steady decline in vocations to the priesthood, Pope Paul VI restored the permanent diaconate in 1963 during the Second Vatican Council.

It was not until 1978 that restoration began in the newly formed Diocese of Orlando with the help of deacons who had come from other regions. Bishop Thomas Grady helped draft a formation plan and the Lay Ministry Program was established with the intention of forming men and women who were already in pastoral ministries. The two-year program was a requirement for any man seeking to apply to the diaconate. If accepted, the candidate, recommended by his pastor, would continue another two years as an aspirant in formation and then was ordained.

The first cohort was made up of 13 men who were ordained in June of 1982. With the support of their wives and children, they led through their service, being Christ in the world. Deacon Donald Boland of St. Teresa of Avila Parish in Titusville was part of that original group and was ordained at age 55. Still very active at age 90, he preaches at all of the Masses once a month. “I have gotten closer to God and learned much by preparing for my homilies,” he said. “I am so grateful that God chose me to be a deacon because it gave me a real purpose in my life.” His wife, Christine, began the Ministry of the Sick in the diocese, going parish to parish training people for three years. Deacon Boland helped her while also working with the Rite of Catholic Initiation (RCIA), teaching Baptismal preparation classes and more.

Much of the recent success in the diaconate program is thanks to a focused effort by Deacon Joe Gassman, Director of Permanent Diaconate. Working with Deacon Dave Gray, Secretary of Leadership and Parish Life, both have revisited the vision of what a deacon is again and again. Deacon Gray explains, “You constantly have to be asking, what is the call of the diaconate because we are so new. It is a constant examination, theological reflection, inward focus, reviewing the documents of Vatican II, looking at the writings from the past 50 years, to determine what is this call? And looking at that, we look at how do we discern; how do we form; and how do we live?” That process brought about an additional year of discernment.

He added, “We start looking at the human dimension, the relationships, how connected are you within the walk of parish life, and outside the walls of the parish—walking with community such as prison ministry or homelessness.” Deacon Gray noted that “We do not make deacons. Those gifts have to present in them already.”

Over the years, the formation process has evolved. Deacon Gray credits former Bishop Thomas Wenski and Bishop John Noonan with strengthening the diocesan program. A relationship was built with St. Leo University, developing 36 hours of college level credit that could be used in formation. “Now we have an educational model wrapped with 400 more hours of different dimensions of our life. That continues to grow and change,” Deacon Gray said.

Deacon Gassman continues to build relationships with parish pastors. His focus is helping the diaconate flourish. “We’re recruiting holy men from the world – civilian jobs, families, activities and works of charity within the community. We really become the tentacles that reach into places where the bishop and priests really don’t have time to do it. We become that true icon image of Christ the Servant in the midst of the world, outside the walls of the Church and also our identity within the Church. We are that connector between the laity and the sacred on the altar,” he explains.

Both men understand that the diversity of formation styles and lived experiences presents the challenge of how to build the pastor/deacon relationship. Through yearly reviews, prayer and conversation, Deacon Gassman is working to bridge the gap of misunderstanding and clarify a common vision, recognizing this is a journey that will take time. “I truly believe in Vatican II and what they have brought forth, a call to be a unity as Father, Christ and Holy Spirit are in union—that’s what we’re called to be with our pastors,” said Deacon Gray.

Today’s deacon is a man of faith, with an active family, who is involved in the ministries of the parish and also brings the light of Christ to his civilian workplace. He is one of the “…reputable men, filled with the Spirit and wisdom…” (Acts 6:3)

To learn more about the Diocese of Orlando diaconate, go to www.orlandodiocese.org/ministries-offices/deacons-welcome/