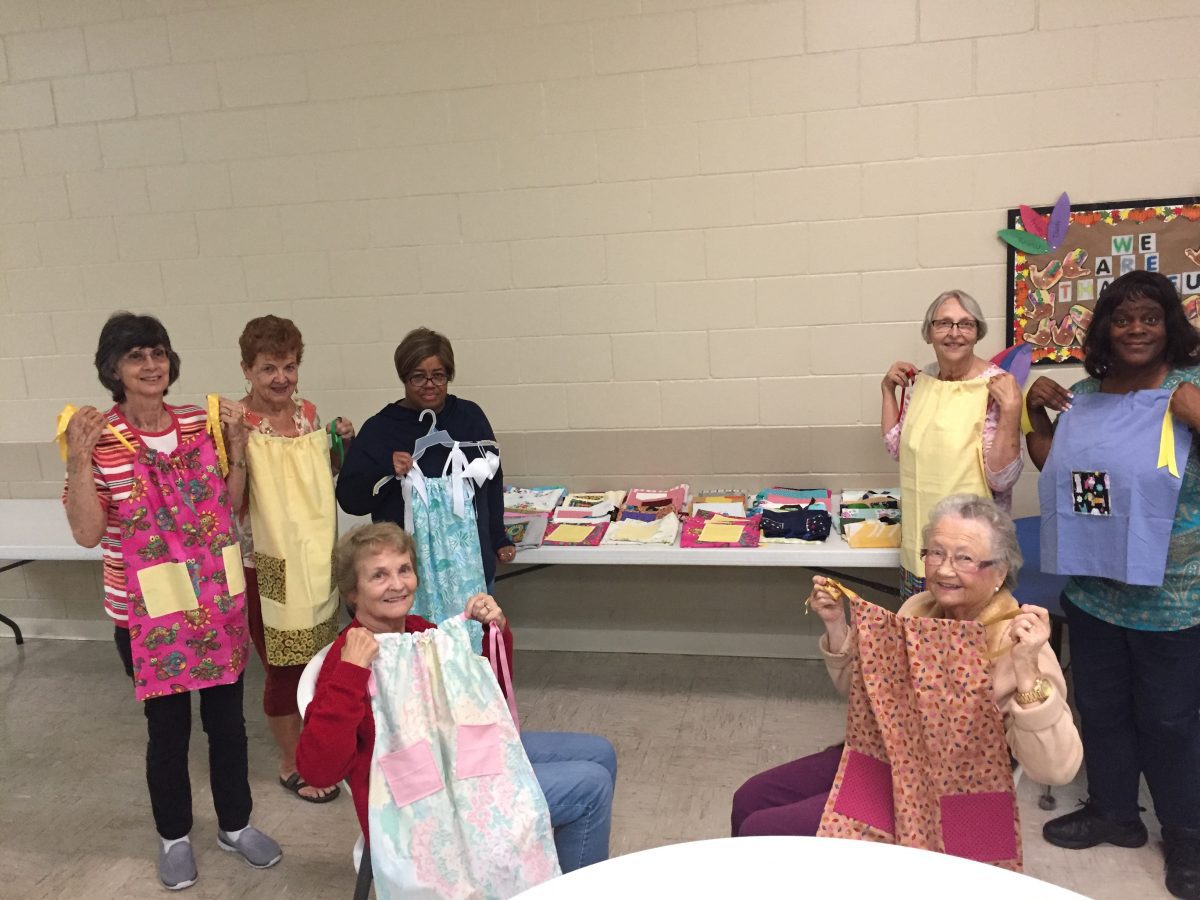 LAKELAND | Toya Martin remembers her first St. Anthony Council of Catholic Women meeting. They were making dresses out of pillowcases for women in need. Not a seamstress, she was amazed. Now that she is president of the council, she decided to bring it back. Thanks to council members, friends and parishioners at St. Anthony Parish in Lakeland, more than 50 dresses will go to Countryside Children’s Welfare Home in Bawjiase in the Central Region of Ghana.

Martin became a member by accident. The CCW was hosting a retreat and to attend, she thought she had to become a member. Always attracted to a life of service, it was a perfect fit. “I’ve been doing service all my life, so to that played into it. I enjoy doing service,” Martin said.

She bought pillowcases at the Dollar Tree to jumpstart the endeavor. “Because I don’t know anything about sewing, I bought satin pillowcases; not knowing satin is hard to work with,” she laughed. She sent out web links of the pattern and enlisted parishioners via bulletin announcements.

Between parishioners, council members and friends of Kathy Wagner, another council member, they have more than 50 dresses to send to Ghana. Wagner’s friends had already made dresses when they lost their delivery contact. Learning that the CCW had an organization in need and a connection to get them there, they donated all they had, 38 dresses, and are still sewing.

“Never did I dream that one group of women would donate their dresses and then all these other people would make them. It’s amazing for something that just went into the bulletin. They got right on it,” Martin said.

After numerous calls, Martin found recipients in need of the dresses and someone to deliver them thanks to Elizabeth Doone at the Department of Teaching and Learning at the University of South Florida (USF) in Tampa. The fellow Catholic planned her first study abroad experience to Ghana West Africa in 2013. “My neighbor, an accomplished seamstress, shared that she had seen a pattern for pillow case dresses that I should make for the children. Sharon Covert was her name and she sewed the banners for St. Mark’s Catholic Church and blankets for children with cancer in Tampa.” Doone recalled, “She was persistent and when I noted I didn’t have time, she made four dresses and emailed me the directions and the exact measurements and materials to get me started. She also sent a dozen dresses and had a friend of hers send a couple others. So, I gathered a few friends from the university who sewed and collected gently used and new pillowcases and began the first pillowcase dress project. We completed 75 pillow case dresses to take to the orphanage the first year.”

Doone made the dress project part of the Service Learning Project for the students and opened a classroom at USF to bring people together who wanted to sew and turn out as many dresses as possible in a 10-hour day. Since then, the project has expanded to her parish, Girl Scout troops and more through the benevolence of many Catholic friends and communities such as St. Anthony’s CCW. Having the CCW participate is yet another unexpected blessing. “The dresses have truly become a way for the community to do their part,” she said.

Martin thought the council might have 10 to 15 dresses to send and is thrilled with the outcome. “It’s fantastic! Because of the outpouring, we have one other avenue where we can send dresses so we are going to try to do that as well as an ongoing effort, rather than a one-time thing.” She explained, “You can use any size pillowcase. The hem can be let out to be worn as a tunic or dress. There are a lot of things they (the recipients) can do. Some sew it onto a t-shirt.”

Martin’s daughter, Katherine, will deliver the dresses to Doone Dec. 1. The 21-year old joined St. Anthony Council of Catholic Women at age 18. She is the youngest women’s council member.

“As a family we do a lot of volunteer hours because I think that’s important,” explained her mother. “Some people say they are very fortunate. We are more than very fortunate, so therefore we need to give back as much as we can. I instill that in both my daughters.”

Martin said she hopes the younger generation will continue to join the CCW and perpetuate its legacy of advocacy and justice.  She believes there are few young people because “people believe it’s a lot of old women. But they don’t know how young some of these old women are.”

By Glenda Meekins of the Florida Catholic  November 15, 2019