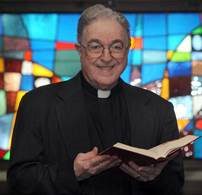 Father Gonzalez was adjunct professor of languages at St. Francis de Sales College Seminary in Oklahoma City from 1963 to 1964. He was ordained a priest at the National Shrine of the Sacred Heart in Washington, D.C., August 9, 1964. From 1964 to 1968 he served as associate pastor of Sacred Heart Parish in Staten Island, N.Y. In 1968 he was administrator of St. Joseph Parish in Fayette, Mo. From 1968 to 1969 he was the Newman Center Director at Lincoln University in Jefferson City, Mo. He also served at Sts. Peter and Paul Parish in Boonville, Mo., from 1969 to 1972.

He became a United States citizen in September 1971 and was incardinated into the Orlando Diocese in July 1984. From 1972 to 2014, he served at St. James Cathedral in Orlando, St. Teresa Parish in Titusville, St. Mary Parish in Rockledge, St. Jude Parish in Ocala, St. Ann Parish in Haines City, and St. Thomas Aquinas Parish in Bartow. He was also the episcopal vicar-delegate for Hispanics in 1979 and served as the spiritual director to the Spanish Cursillo movement and director of the Spanish-speaking apostolate. He earned a doctorate in education from Western Kennedy University in Wyoming in 2004.

Father Gonzalez retired in 2001 and continued to serve at Church of the Resurrection in Lakeland until his death on April 17, 2017.

He had a great love of the Mass and said that the liturgy is the most important part of the Catholic Church. “It’s essential to the life of the Church,” said Father Gonzalez. “It means everything.”