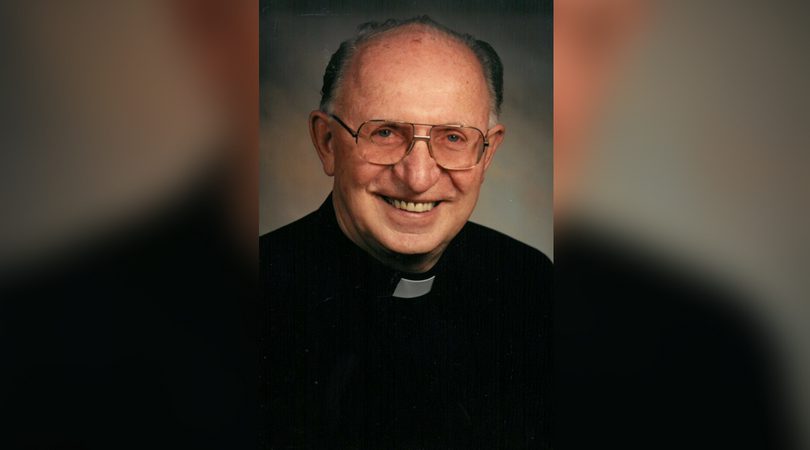 Monsignor Valentine Sheedy was born on January 23, 1927 in Feakle, County Clare, Ireland to Jeremiah and Lillian (McGrath) Sheedy. He was the third child, second son, in a family that eventually had six sons and three daughters.  As a young man, he was known for his love of sports. He was a star athlete in sprinting, hurling and rugby, but always felt a calling for something more in his life. Near the end of his boarding school years, one of his teachers, a priest from the Congregation of the Holy Ghost Fathers, encouraged him to consider the priesthood. He studied at University College in Dublin and received his bachelor degrees in English and Philosophy from the Holy Ghost Seminary in Kimmage Manor, Dublin.

Monsignor Sheedy was ordained on July 3, 1955. Shortly after, he was sent to the Owerri Diocese in Eastern Nigeria (at that time called Biafra) to teach. He remained in the country for 12 years until civil war forced him and other missionaries to leave. Monsignor Sheedy arrived in the Diocese of St. Augustine in 1967 and was incardinated into the Diocese of Orlando on February 16, 1973. He remembered those times fondly saying in a recent interview, “There were so many hard-working priests. The priests in Orlando are second to none in their industry. Their commitment and their witness was great.”

After retirement in 1998, he assisted at St. Brendan Parish, Ormond Beach and Church of the Epiphany in Port Orange. “God has blessed the Diocese of Orlando,” shared Sheedy in 2017. “I thank God for my vocation. The cross is a part of life for everybody. I can assure it’s also part of the priestly life, but the rewards are infinite.”