Participants in the plenary assembly of the Pontifical Council for Promoting Christian Unity, who have been meeting to examine the subject “Towards a new stage of ecumenical dialogue”, were received by the Holy Father. 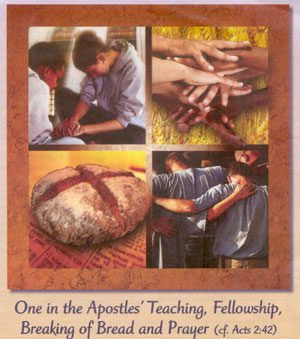 Participants in the plenary assembly of the Pontifical Council for Promoting Christian Unity, who have been meeting to examine the subject “Towards a new stage of ecumenical dialogue”, were received by the Holy Father.

Benedict XVI began his address to them by recalling the fiftieth anniversary, which fell yesterday, of the foundation of this dicastery, created by Blessed John XXIII in 1960 on the eve of Vatican Council II. Originally called the Secretariat for Promoting Christian Unity, it became a pontifical council in 1988 by wish of John Paul II.

John XXIII’s decision “represented a milestone on the ecumenical journey of the Catholic Church”, said the Pope. “Over these fifty years more realistic knowledge and greater respect for other Churches and ecclesial communities have been acquired, overcoming the sediments of historical prejudice. Theological dialogue has increased, and so has the dialogue of charity. Various forms of collaboration have been developed, including – apart from those that aim to defend of life, protect creation and combat injustice – important and fruitful steps in the field of the ecumenical translations of Sacred Scripture”.

The Pope then turned his attention to the “Harvest Project”, an initiative of the dicastery to draw up an initial assessment of results. It has, he said, “highlighted areas of convergence and those in which reflection must continue and intensify”. In this context the Holy Father invited members of the pontifical council to continue “your task of promoting the correct reception of the results achieved so far, and publicising the current state of theological research on the journey towards unity.

“Today”, he added, “some people believe that this journey has lost its impetus, especially in the West. Thus do we see the urgent need to revive ecumenical interest and give a fresh incisiveness to dialogue”, facing such challenges as “new anthropological and ethical understandings, the ecumenical education of new generations and the greater fragmentation of the ecumenical panorama”.

“The Catholic Church passionately continues her dialogue with the Orthodox Churches and the Ancient Eastern Churches, with which bonds of the ‘closest intimacy’ exist, seriously and rigorously seeking to develop our shared theological, liturgical and spiritual heritage, and to face the elements that still divide us. With the Orthodox we have reached a crucial point of confrontation and reflection: the role of the Bishop of Rome in the communion of the Church. The ecclesiological question is also at the heart of dialogue with the Ancient Eastern Churches: despite many centuries of misunderstanding and remoteness we have joyfully noted that we have preserved a precious shared heritage”.

“Though faced with new problematic situations or difficult points of discussion, the goal of the ecumenical journey remains unchanged, as does the firm intention to continue. This is not however, a commitment that falls into what could be called political categories, in which negotiating ability or greater capacity to reach compromise come into play, and in which the participants hope that, as good mediators, after a certain period they will reach an agreement acceptable to everyone.

“Ecumenical activity has a dual dynamic”, the Pope explained. “On the one hand it means searching dedicatedly, passionately and tenaciously for all the unity in truth, devising models of unity, illuminating points of contention and obscurity in order to achieve unity. This must take place through the necessary theological dialogue, but above all in prayer and penance, in that ecumenical spirit which constitutes the pulsating heart of the entire journey. The unity of Christians is and remains prayer, it dwells in prayer. On the other hand there is another operational dynamic which arises from our firm awareness that we do not know the time that the unity of all Christ’s disciples will be achieved, and we cannot know it because we do not ‘make’ unity, God ‘makes’ it; it comes from on high, … it is a participation in divine unity. Yet this must not diminish our commitment; quite the contrary, it must make us ever more attentive to recognising the signs and times of the Lord, knowing how to recognise with gratitude what unites us and working to ensure it … grows”.

“In the final analysis”, the Holy Father concluded, “also on the ecumenical journey we must leave to God that which is exclusively His and seriously explore, with constancy and dedication, our own task, bearing in mind that that our commitment is characterised by the twofold concepts of acting and suffering, activity and patience, fatigue and joy”.

As a sign of respect to the Greek Orthodox Tradition,
women are asked to wear head scarves or small veils
when entering this sacred space.