Poor in possessions, rich in Spirit: How a Ugandan mission has changed lives, there and here 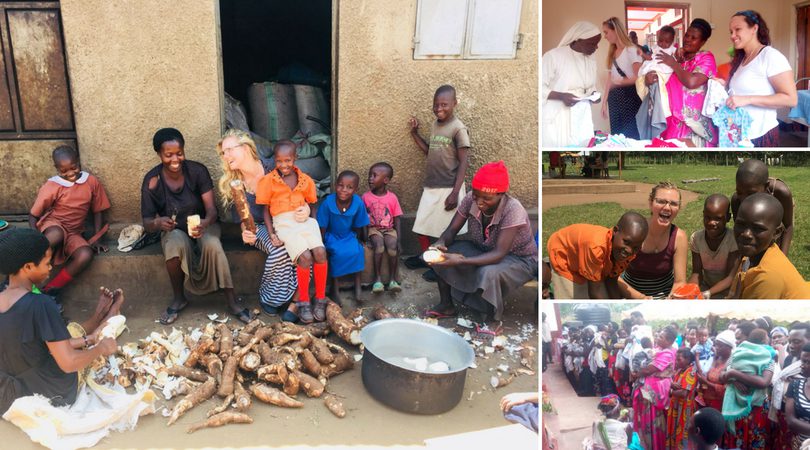 ORLANDO | When three Ugandan Sisters of the Immaculate Heart of Mary Reparatrix first came to Blessed Trinity Parish in Ocala in 2000, Father Pat Sheedy never imagined establishing a mission in Uganda. It was a photograph of what he described as a “stick mud” rudimentary church that moved him, his parish, the school and others to help build a solid house of worship in the Diocese of Hoima, Uganda.

Tee shirts were sold and the first trip was made in 2004. Father Sheedy remembers, they were like tourists. By the time he left, he had committed to building a church for 800 people and the rest is history. Seeing the need and seizing the moment, the Bishop of Hoima created a new parish region of 17 villages. Today it has grown to include 30 villages and to date, 26 churches have been built.

Fifteen years later, the sister parish now has a rectory, a grade school with 18 classrooms, four dorms for boarders and a high school which is half built. “Even if the students live locally, there they get three meals a day and study hall,” said Father Sheedy, explaining why 95 percent of the students board.

Each year he goes to each village to get a report and identify needs and assess their commitments. “We are always welcomed with a huge ceremony,” he said. “They might meet us a half a mile up the road with a parade of motor bikes and branches, paparazzi stuff,” he chuckled. After every trip, he writes back to each church, outlining his parish’s commitment.

He recalls when most of his Masses were “in the open air.” Father Sheedy blesses two new churches per year, often in various stages of construction. “They use the church when it has walls and a roof, even though it might not have windows or a floor,” he noted. Churches are built in stages and have no plumbing or electricity, so the cost is significantly less than it would be in the United States. Many are fully sponsored by American families, including some of Father Sheedy’s own siblings.

Every village has a sponsored 180-foot deep water well with a pump and tank. Solar lamps have replaced dangerous kerosene ones, lighting homes in the evening so students can do homework and families can eat their meals.

The parish of 30 villages now has approximately 32,000 Catholics and this explosion of faith is thriving. Most recently, Blessed Trinity helped refurbish a maternity ward and has taken on updating the orphanage. To celebrate families with young children were invited to help dedicate the clinic to Our Lady of Guadalupe, patroness of babies and mothers. More than 120 children received new clothes sent from benefactors from abroad.

Gloria Powers and her 20-year-old daughter, Elizabeth helped prepare the “baby shower”. The duo from St. Mary of the Lakes in Eustis visited in 2017. Afterwards, they raised more than $4,000 and gathered suitcases full of clothing and blankets from people in their parish and St. Patrick Parish in Mount Dora. They wanted to raise enough money to help the ward purchase an ultra sound machine and an oxygen concentrator. Elizabeth said her trip had been humbling and changed the way she lives her life. “What impacted me the most was seeing them in Adoration,” she said. “Everyone was so much more connected to their faith because they had no distractions – no cell phones, television… internet. They can just sit there (in Eucharistic Adoration) and be. They have no sadness and don’t feel bad for themselves because they are happy that they are doing every little thing for God.”

Sister Juliet Nakalema never dreamed that a photograph taken on the sad occasion of her mother’s funeral could lead to such a joyous outcome. Born in Nalweyo, where that “stick mud” church once stood, she appreciates the love shown to her Ugandan sisters and brothers. “I know that God can do anything,” she said recalling her early embarrassment at what the Blessed Trinity children were referring to as “Sister Juliet’s church.” But she said, “Let it be if it is God’s will. It’s God’s work.” She added, “For me, like Mary, it is the magnificent—giving glory to God, glorifying the Lord all the time for every good thing that has been done because God looked on the lowly servant, Mary, and glorified her. Now they can see that God looks on the lowly people and the poor and helps them.”