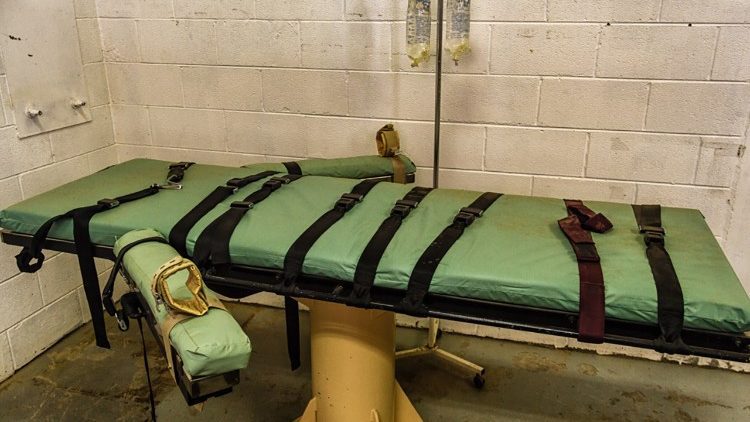 Pope Francis has approved a new revision of paragraph number 2267 of the Catechism of the Catholic Church, according to which “a new understanding has emerged of the significance of penal sanctions imposed by the state,”  thus “the death penalty is inadmissible”

The decision was announced by the Congregation for the Doctrine of the Faith in a ‘Letter to the Bishops’ dated 1 August and signed by the Prefect, Cardinal Luis Francisco Ladaria.

2267. Recourse to the death penalty on the part of legitimate authority, following a fair trial, was long considered an appropriate response to the gravity of certain crimes and an acceptable, albeit extreme, means of safeguarding the common good.

Today, however, there is an increasing awareness that the dignity of the person is not lost even after the commission of very serious crimes.  In addition, a new understanding has emerged of the significance of penal sanctions imposed by the state.  Lastly, more effective systems of detention have been developed, which ensure the due protection of citizens but, at the same time, do not definitively deprive the guilty of the possibility of redemption.

Consequently, the Church teaches, in the light of the Gospel, that “the death penalty is inadmissible because it is an attack on the inviolability and dignity of the person”,[1] and she works with determination for its abolition worldwide”.

According to the previous text of paragraph 2267, the Church did not exclude recourse to the death penalty in “very rare, if not practically nonexistent” circumstances:

2267. Assuming that the guilty party’s identity and responsibility have been fully determined, the traditional teaching of the Church does not exclude recourse to the death penalty, if this is the only possible way of effectively defending human lives against the unjust aggressor.

If, however, non-lethal means are sufficient to defend and protect people’s safety from the aggressor, authority will limit itself to such means, as these are more in keeping with the concrete conditions of the common good and more in conformity to the dignity of the human person.

Today, in fact, as a consequence of the possibilities which the state has for effectively preventing crime, by rendering one who has committed an offense incapable of doing harm – without definitely taking away from him the possibility of redeeming himself – the cases in which the execution of the offender is an absolute necessity “are very rare, if not practically nonexistent.”68

Revision in continuity with preceding Magisterium

In the Letter to the Bishops  Cardinal Ladaria explained that the revision of n. 2267 of the CCC   “expresses an authentic development of doctrine that is not in contradiction with the prior teachings of the Magisterium” and said “these teachings, in fact, can be explained in the light of the primary responsibility of the public authority to protect the common good in a social context in which the penal sanctions were understood differently, and had developed in an environment in which it was more difficult to guarantee that the criminal could not repeat his crime”.

Ladaria recalled that John Paul II asked that  the teaching on the death penalty be reformulated to better reflect the development of the doctrine that centers on the clearer awareness of the Church for the respect due to every human life affirming that  “Not even a murderer loses his personal dignity, and God himself pledges to guarantee this.” Ladaria said that in many occasions John Paul II intervened for the elimination of capital punishment describing it as “cruel and unnecessary.

In the letter Cardinal Ladaria also recalled Benedict XVI who appealed for “the attention of society’s leaders to the need to make every effort to eliminate the death penalty” and encouraged  “political and legislative initiatives being promoted in a growing number of countries to eliminate the death penalty and to continue the substantive progress made in conforming penal law both to the human dignity of prisoners and the effective maintenance of public order.”

Responsibility of authorities to defend the life of citizens

The new revision of number 2267 of CCC  approved by Pope Francis, Ladaria said, !situates itself in continuity with the preceding Magisterium while bringing forth a coherent development of Catholic doctrine” taking into account the new understanding of penal sanctions applied by the modern State”.

Its new revision, he continued, “desires to give energy to a movement towards a decisive commitment to favor a mentality that recognizes the dignity of every human life and, in respectful dialogue with civil authorities, to encourage the creation of conditions that allow for the elimination of the death penalty where it is still in effect”.

“The new revision of number 2267 of the Catechism of the Catholic Church, approved by Pope Francis, affirms that the understanding of the inadmissibility of the death penalty grew in the light of the Gospel.  This new revision also affirms the Church’s teaching on the gift of life, from conception to natural death, understanding the inviolability and the dignity of the person because we are all created by God for God.  This new revision follows the 50th anniversary of Humanae Vitae, again speaking to the gift of life.  Certainly, it remains the duty of public authorities to defend the life of citizens, as has always been taught by the Magisterium and is confirmed by the Catechism of the Catholic Church in numbers 2265 and 2266.

No matter the time, the people of God have a great responsibility to teach all people about God’s love and goodness and to walk with each other in faith, so that God’s Peace might dwell in the heart of all people.  Then, and only then, will the Kingdom of God be fulfilled on earth.

The people of the Diocese of Orlando have historically led prayer services across our nine counties, including outside of the Florida State Prison where executions take place.  We pray not only for the victims of crimes, but also those who are being punished for these crimes.”