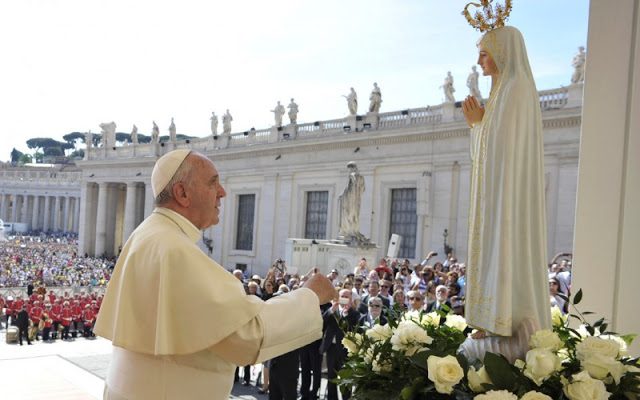 The Gospel ( Lk 1,39-56) of today’s feast of the Assumption of Mary into heaven describes the encounter between Mary and her cousin Elizabeth, emphasizing that “Mary arose and went with haste into the hill country, to a city of Judah “(V.39). In those days, Mary ran to a small town near Jerusalem to meet Elizabeth. Today, however, we contemplate on its way to the heavenly Jerusalem, to finally meet the Father’s face and revise the face of her Son Jesus. So many times in his life on earth had covered mountainous areas, up to the last stage of the painful Calvary, associated to the mystery of Christ’s passion.

Today we see her reach the mountain of God, “clothed with the sun, with the moon under her feet, and on her head a crown of twelve stars” ( Rev12,1) – as the book of Revelation says – and we see it cross the threshold of the heavenly homeland.
It was the first to believe in the Son of God, and is the first to be taken up into heaven in body and soul. The first to welcome and took Jesus in her arms when he was a child, and is the first to be accepted by his arms to be introduced into the eternal Kingdom of the Father. Mary, humble and simple girl from a remote village in the outskirts of the Roman Empire, because he accepted and lived the Gospel, is permitted by God to stand for eternity next to the throne of the Son. That’s how the Lord cast down the mighty from their thrones and lifted up the lowly (cf. Lk 1, 52).

The Assumption of Mary is a great mystery that concerns all of us, about our future. Mary, in fact, precedes us into the street on which those who have gone through Baptism, have tied their lives to Jesus, like Mary tied to Him their lives. Today’s feast makes us look to the sky, promises “new heavens and the new earth”, with the victory of the risen Christ over death and the final defeat of the evil one. Therefore, the exultation of the humble girl from Galilee, expressed in the canticle of the Magnificat , it becomes the song of all mankind, who is pleased to see the Lord bend over all men and all women, humble creatures, and take them with him in the sky.

The Lord looks down on the humble, and to raise them as proclaiming the canticle of the Magnificat. This song of Mary also leads us to think about many current painful situations, particularly women overwhelmed by the weight of life and the drama of violence, the slave women of the arrogance of the powerful, the girls forced into inhuman work, the women forced to surrender in body and in spirit to the greed of men. May come as soon as possible for them the beginning of a life of peace, of justice, of love, waiting for the day when you finally feel gripped by hands that do not humble themselves, but with tenderness raise and lead on the way of life , up to the sky. Maria, a girl, a woman who has suffered so much in his life, makes us think of these women who suffer so much. We ask the Lord that He leads them by the hand and bring them on the road of life, freeing them from this bondage.