Pope Francis: ‘let yourselves be shaped by the Spirit’ 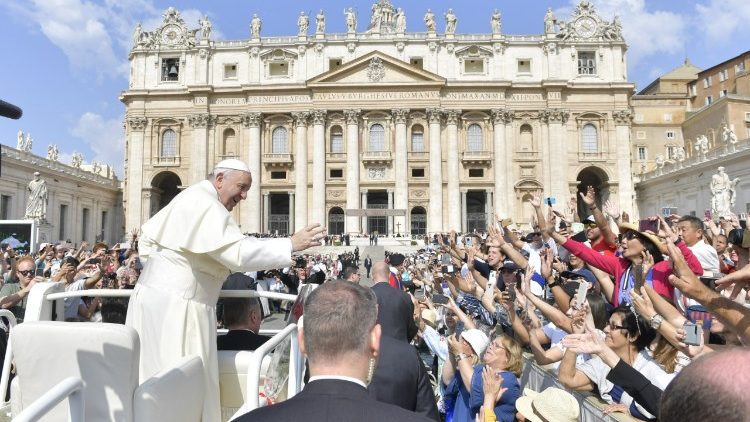 Pope Francis reminded believers that Confirmation is an “undeserved gift” to be welcomed with gratitude, safeguarded with care and lived with docility allowing oneself to be shaped and molded by the Spirit in order to ‘reflect’ the light of Christ in today’s world.

Speaking to the pilgrims gathered in St. Peter’s Square for the Wednesday General Audience on May 30, the Pope continued his series of reflections on the Sacrament of Confirmation.

Confirmation is a gift

Focussing on the ‘gift’ imparted to us when we receive the Sacrament, he said that just as Jesus received the outpouring of the Spirit at his baptism in order to carry out his mission, the Church prays that we too may receive the gifts and the fruits of the Spirit that allow us to spread its message.

He remarked on the fact that those who receive Confirmation take upon themselves the responsibility of “renewing the promises already made by parents and godparents” during Baptism.

The gift of the Spirit, he explained, is communicated through the laying on of hands and anointing with sacred chrism.

On the one hand, the Pope said, the Spirit distributes his gifts of “wisdom, intellect, counsel, strength, science, piety, and holy fear”, while on the other he is “the creator of unity”.

Thus, he explained, the Spirit gives all these riches that are different but in the same way those riches bring harmony and unity to the people of God and to the world.

Pope Francis said that Christians, who receive an “indelible spiritual mark” through Confirmation, are called to reflect the light of Jesus in the world and “to spread amongst men” his message of salvation.

Sealed with the Holy Spirit, he concluded we are configured more closely to Christ and strengthened to bear witness to him in our world.

“May each of us grow in gratitude for the gift received at our Confirmation and open our hearts ever more fully to the creativity of the Spirit who makes all things new” he said.

Message of peace from Korean athletes

Following the catechesis, a group of athletes from the Taekwondo Federation gave a short demonstrated of their skills.

Dressed in black and white, the athletes from the Korean peninsula, unrolled a banner that read: “Peace is more precious than victory” drawing words of gratitude and participation from Pope Francis.

“I thank the Korean athletes for their performance, he said, it was a manifestation of their desire for peace. It was a message of peace for all humanity! Thank you!”