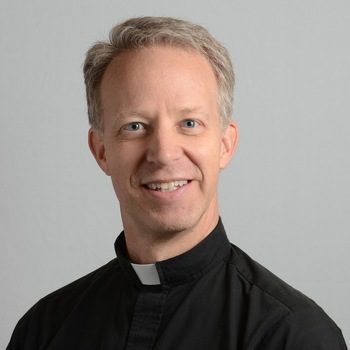 We pray with gratitude for the appointment of Bishop-elect Wack to the Diocese of Pensacola-Tallahassee.

The Holy Father, Pope Francis appointed Bishop of Pensacola-Tallahassee (USA) the Reverend William A. Wack, CSC, of ​​the US Province “Moreau” of the Congregation of Holy Cross, until now pastor of “Saint Ignatius Parish” in Austin (Texas ).

The Reverend William A. Wack, CSC, was born June 28, 1967 in South Bend (Indiana), in the Diocese of Fort Wayne-South Bend. He received his Bachelor in Political Science and International Relations at the University of “Notre Dame” (1990), after which he entered the Congregation of Holy Cross. He carried out his ecclesiastical studies at the University of “Notre Dame” (1993) and subsequently obtained the Diploma in “Executive Management” at the same University (2002).

He made his solemn vows in the Congregation of Holy Cross on August 28 1993. He was ordained priest on April 9, 1994 for the same Congregation.

After ordination, he held the following positions: assistant priest of the “Sacred Heart Parish” in Colorado Springs in Colorado (1994-1997); Associate Director of Vocations for his Congregation (1997-2002); Director of ” Andre House, “a center for poor and homeless in Phoenix in Arizona (2002-2008); Member of the administrative council of the “Holy Cross Associates” (1998-2002), of ” Holy Cross College “at the University of” Notre Dame “(2002-2003), the diocesan Caritas of Phoenix (2003-2008) and” Chairman “Austin of the diocesan Committee for Catholic schools (Member 2010-2016). He is currently pastor of “Saint Ignatius Martyr Parish” in Austin, Texas (since 2009), Vice-Chairman of the Council of Priests of the Diocese of Austin (Member since 2011) and Vicar Forane of ” Austin Central Deanery “.

Besides English, he speaks Spanish.

Click here to learn more about bishop-elect Wack, who will also serve as a board member of both the Florida Catholic Conference and Florida Conference of Catholic Bishops.