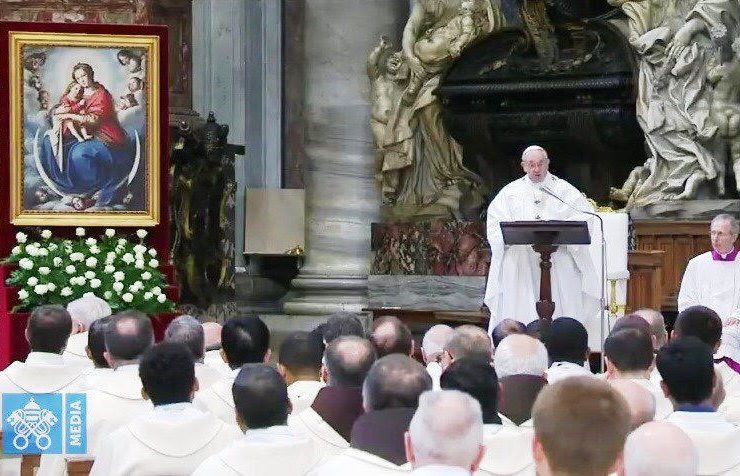 Pope Francis reminded the Missionaries of Mercy of the power of a priest simply being good, holy, gentle and simple, and warned them against being over the top.

The Holy Father did so during the Eucharistic Concelebration, on April 10, 2018, in St. Peter’s Basilica, he presided over with 500 Missionaries of Mercy.

In the Pope’s homily, he stressed the ideas of personal rebirth and serving the community that in today’s readings offer two instructions to help them in their mission. These two inseparable aspects that the missionaries had began carrying out at the start of the Jubilee of Mercy, the Pope noted, moves in both these directions: “serving the people, so they are “reborn from above” and serving the communities, so that they may live the commandment of love with joy and coherence.”

The Gospel recalls that those who are called to bear witness to the Resurrection of Christ must themselves, in the first person, “be born from above” (cf. Jn 3: 7). Otherwise you end up becoming like Nicodemus who, he noted, did not understand the logic of God, which is the logic of grace, of mercy, where those who become small are great, those who were last, become first, and those who recognize themselves as ill, are healed.

This means, the Pope suggested, truly leaving the primacy to the Father, to Jesus and to the Holy Spirit in our life.

“Pay attention: it is not a matter of becoming “invaded” priests, as if you were depositories of some extraordinary charisma. No,” he said. “Ordinary priests. Simple, gentle, balanced, but capable of letting yourselves be constantly regenerated by the Spirit, docile to His strength, interiorly free – above all by themselves – because they are moved by the “wind” of the Spirit Who blows where He wants.”

The second recommendation for the priests involved serving the community: to be priests capable of “raising” in the world’s “desert” the sign of Salvation, that is, the Cross of Christ, as a source of conversion and renewal for the whole community and for the world itself.

“In particular, I would like to stress that the Lord Who died and rose again is the force that creates communion in the Church and, through the Church, in the whole of humanity.

The Pope praised when the lifestyle of the community is also “contagious” to those outside.

“The living presence of the Risen Lord produces a force of attraction which, through the witness of the Church and through the various forms of proclamation of the Good News, tends to reach everyone, nobody excluded.”

Stressing the missionaries in their ministry follow suit, the Pope highlighted: “In fact, both the Church and the world today have a particular need of mercy because the unity desired by God in Christ prevails over the negative action of the evil one who takes advantage of many things that are in themselves good to be misused, in order to divide rather than unite.”

“We are convinced that ‘unity is superior to conflict,’” he noted, adding, “but we also know that without mercy, this principle does not have the strength to be implemented concretely in life and history.”

Encouraging those gathered to leave this encounter with the joy of being encouraged in the ministry of mercy, Pope Francis concluded, saying: “First of all, confirmed in the grateful confidence of your always being called to be reborn “from above,” by God’s love. And at the same time, confirmed in the mission of offering everyone, the sign of Jesus “lifted up” from the Earth, so the community is a sign and instrument of unity in the midst of the world.”