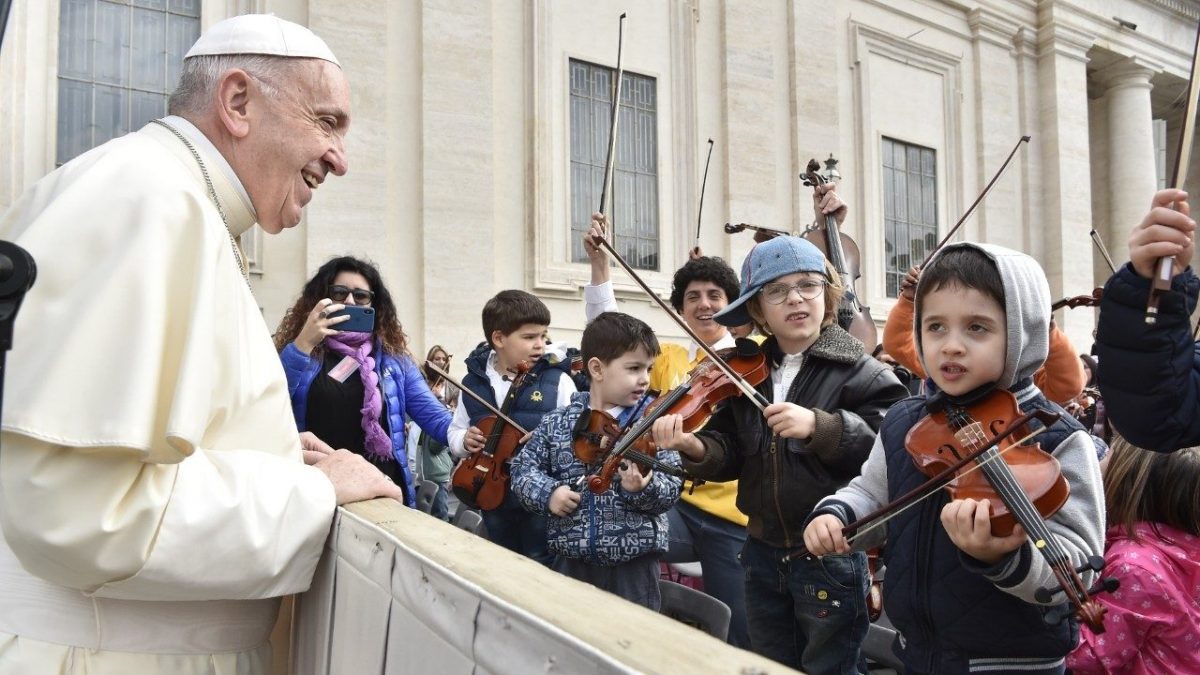 Pope Francis continued his catechesis on Baptism at the Wednesday General Audience on April 18, 2018 inviting parents and godparents to teach children to make the sign of the cross correctly.

He said the priest and parents trace the sign of the cross on the child during the Baptismal liturgy to express “the imprint of Christ on the one who is going to belong to him.” He said it also “signifies the grace of the redemption Christ won for us by his cross.”

Speaking off-the-cuff, the Holy Father urged parents and godparents to teach children to make this sign correctly, because “if they learn it as children, they will make it correctly later as adults.”

Pope Francis said the words pronounced and gestures performed at the celebration of Baptism unfold the Sacrament’s meaning as the beginning of our new life in Christ.

“What happens in the celebration of Baptism provokes a spiritual dynamic that runs through the whole life of the baptized; it is the beginning of a process that allows one to live united to Christ in the Church.”

An important sign at Baptism is the name given by parents to their child. The Pope said a person’s name represents their identity and is a constant reminder that they are a unique person. God, he said, “calls every person by name, loving us uniquely in the concreteness of our lives.” He said this requires a personal response and not a simple “copy and paste.”

Pope Francis said becoming a Christian in Baptism is “a gift from above.” We become God’s children and begin a journey of faith.

The Pope said the formation of catechumens and preparation of the parents helps the baptized person to be brought up in holiness in union with Jesus.

The mystery of the cross traced on the child’s forehead is the Christian’s distinctive sign, he said.

Pope Francis said we become Christians in the measure in which the cross is imprinted as an “Easter sign” in our lives.

“Making the sign of the cross – when we wake, before meals, in the face of danger, to defend against evil, and the evening before sleeping – means reminding ourselves and others to whom we belong and who we want to be.”

That’s why, he said, “it’s so important to teach children how to make the sign of the cross.”