Pope Francis: The Strength of the Church is Concealed in the Deep Waters of God 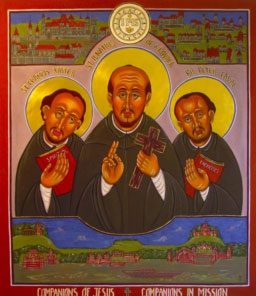 This morning, Pope Francis celebrated the Mass of the Feast of the Most Holy Name of Jesus in the Church of Jesus, to give thanks for the new Jesuit saint Pierre Favre.

Picture: St. Francis Xavier, St. Ignatius of Loyola and Blessed Peter Faber are shown in an icon. Pope Francis is expected to issue a decree declaring one of his favorite Jesuits, Blessed Peter Faber, a saint. (CNS photo/courtesy of Jesuit General Curia). 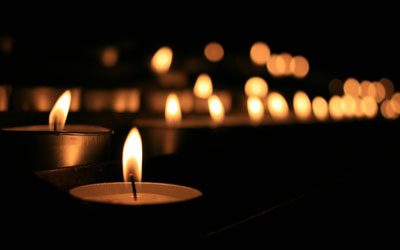 This morning, Pope Francis celebrated the Mass of the Feast of the Most Holy Name of Jesus in the Church of Jesus, to give thanks for the new Jesuit saint Pierre Favre. Concelebrating with the Holy Father were Cardinal Angelo Amato, prefect of the Congregation for the Causes of Saints; Cardinal Agostino Vallini, vicar general of His Holiness for the diocese of Rome; Bishop Luis Francisco Ladaria Ferrer, S.J., secretary of the Congregation for the Doctrine of the Faith; Bishop Yves Boivineau of Annecy, France, in whose diocese Favre was born, and the vicar general Alain Fournier-Bidoz; the superior general Fr. Adolfo Nicolas, S.J., and seven young Jesuit priests.

Picture: St. Francis Xavier, St. Ignatius of Loyola and Blessed Peter Faber are shown in an icon. Pope Francis is expected to issue a decree declaring one of his favorite Jesuits, Blessed Peter Faber, a saint. (CNS photo/courtesy of Jesuit General Curia)

Canonized by Pope Francis on 17 December, Pierre Favre, was the first companion of St. Ignatius of Loyola – for this reason he is known as “the second Jesuit” – and one of the founders of the Society of Jesus, of which he was also the first priest. The tombs of St. Ignatius and St. Pierre Favre are located in the Church of the Most Holy Name of Jesus in Rome.

Pope Francis dedicated his homily to the new saint, and said that he was a “restless” man of “lofty desires”: “it is necessary to search for God to find Him, and to find him in order to seek him again, and for ever. Only this restlessness brings peace to the heart of a Jesuit, a restlessness that is also apostolic, so that we never tire of proclaiming the kerygma, of evangelising with courage. And it is restlessness that prepares us to receive the gift of apostolic fruitfulness. Without restlessness, we are sterile”.

“And this was the restlessness of Pierre Favre”, continued the Pope, “a man of lofty desires, another Daniel. Favre was a ‘modest, sensitive man with a profound inner life. He was endowed with the gift of making friends with people from every walk of life’. However, his was a restless, indecisive spirit, never satisfied. Under the guidance of St. Ignatius he learned to unite his restless but gentle – indeed exquisite – sensibility with a capacity to make decisions. He was a man of lofty desires; he took charge of his desires, he recognized them. Rather, for Favre, it was precisely when faced with difficult tasks that he demonstrated the true spirit that sets into action”.

“An authentic faith always implies a deep desire to change the world. And this is the question we should pose ourselves: do we too have great visions and zeal? Are we bold too? Do our dreams fly high? Are we consumed by zeal? Or are we mediocre and satisfied with our theoretical apostolic plans? Let us always remember that the strength of the Church does not reside in herself or in her organizational capacity, but is instead concealed in the deep waters of God. And these waters agitate our desires, and our desires expand our hearts. It is as St. Augustine said: pray to desire and desire to expand your heart. It was precisely in his desires that Favre was able to discern the voice of God. Without desires, one cannot go forth, and this is why we must offer our desires to the Lord. In the Constitutions it is said that we help our neighbors with the wishes presented to the Lord God”.

Favre, affirmed Pope Francis, “had the true and deep desire to open up in God: he was completely centered in God, and for this reason he was able to go everywhere in Europe, in a spirit of obedience and often on foot, to enter into dialogue with everyone, with gentleness, and to proclaim the Gospel. I think of the temptation that perhaps we experience, to which many people succumb, to link the proclamation of the Gospel with inquisitionary bludgeoning and condemnation. No, the Gospel must be proclaimed with gentleness, in a fraternal spirit, with love. His familiarity with God led him to understand that inner experience and apostolic life always go together. He writes in his Memorial that the first movement of the heart must be that of desiring that which is essential and originary, or rather that priority must be reserved for seeking God, our Lord. Favre experienced the desire to let the centre of his heart be occupied by Christ. Only when centered in God is it possible to go out towards the peripheries of the world! And Favre journeyed without respite even to geographical frontiers; indeed, it was said of him that he appeared to have been born never to stay still in any one place. Favre was consumed by the intense desire to communicate the Lord. If we do not have the same desire, then we need to pause a while in prayer and, with silent fervor, ask the Lord, through the intercession of our brother Pierre, that we might again experience the fascination of the Lord who led Pierre in his ‘apostolic follies'”, concluded Pope Francis.