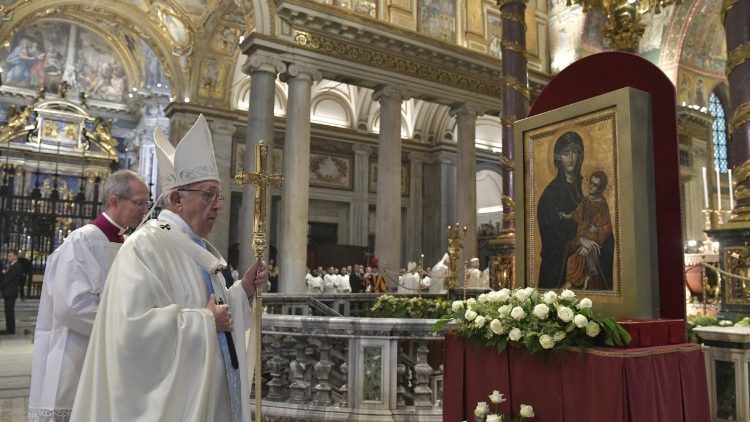 Pope Francis has decreed that the ancient devotion to the Blessed Virgin Mary, under the title of Mother of the Church, be inserted into the Roman Calendar.

The liturgical celebration, B. Mariæ Virginis, Ecclesiæ Matris, will be celebrated annually as a Memorial on the day after Pentecost.

In a decree released by the Congregation for Divine Worship and the Discipline of the Sacraments, Cardinal Robert Sarah, its Prefect, said the Pope’s decision took account of the tradition surrounding the devotion to Mary as Mother of the Church.

He said the Holy Father wishes to promote this devotion in order to “encourage the growth of the maternal sense of the Church in the pastors, religious and faithful, as well as a growth of genuine Marian piety.”

‘Mother of the Church’ in tradition

The decree reflects on the history of Marian theology in the Church’s liturgical tradition and the writings of the Church Fathers.

It says Saint Augustine and Pope Saint Leo the Great both reflected on the Virgin Mary’s importance in the mystery of Christ.

The decree says these reflections are a result of the “divine motherhood of Mary and from her intimate union in the work of the Redeemer.”

Scripture, the decree says, depicts Mary at the foot of the Cross (cf. Jn 19:25). There she became the Mother of the Church when she “accepted her Son’s testament of love and welcomed all people in the person of the beloved disciple as sons and daughters to be reborn unto life eternal.”

In 1964, the decree says, Pope Paul VI “declared the Blessed Virgin Mary as ‘Mother of the Church, that is to say of all Christian people, the faithful as well as the pastors, who call her the most loving Mother’ and established that ‘the Mother of God should be further honoured and invoked by the entire Christian people by this tenderest of titles.’”

Then, in the Holy Year of Reconciliation in 1975, the Church inserted into the Roman Missal a votive Mass in honor of the Blessed Virgin Mary, Mother of the Church.

With the present decree, Pope Francis inserts that celebration into the universal Church’s liturgy as a Memorial on a fixed date.

The Congregation for Divine Worship has published the official liturgical texts in Latin. Translations, the decree states, are to be prepared and approved by local Bishops’ Conferences before being confirmed by the Congregation.