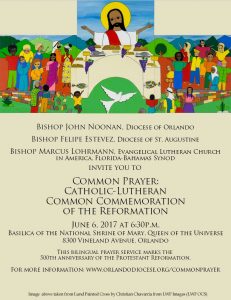 All are welcome and encouraged to participate in the prayer service titled: “Common Prayer: Catholic-Lutheran Common Commemoration of the Reformation.”

Text for the Common Prayer has been provided by the Liturgical Task Force of the Lutheran-Roman Catholic Commission on Unity that includes members of the Lutheran World Federation (LWF) and the Pontifical Council for Promoting Christian Unity (PCPCU) and is made possible after 50 years of ecumenical dialogue.

Catholics and Lutherans are called to witness together to the mercy of God in proclamation and service to the world.