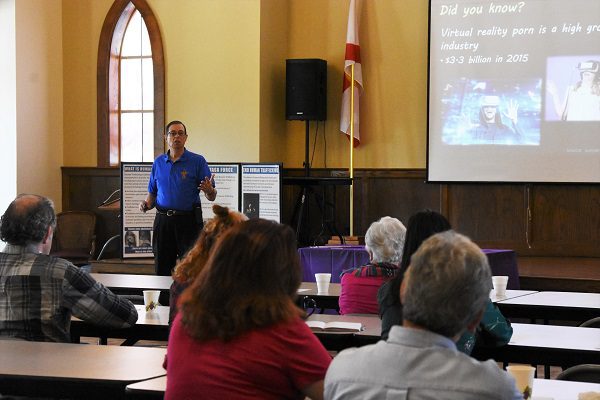 ORLANDO | Florida ranks third in the U.S. in human trafficking and Orlando is first in the nation with persons addicted to pornography. The link is not coincidental. Deacon Fred Molina of the Diocese of Orlando Human Trafficking Task Force shared value information how to protect children from sex trafficking and how to identify victims March 9 at Incarnation Parish.

Clare Colamarino is the respect life coordinator at Incarnation Parish. “When we found out that 1 in 3 middle school students are approached (for sex trafficking) and 1 in 9 high school kids, boys and girls, we decided to host a presentation,” she said. “It’s pervasive… We’re hoping to give information so people can be on the lookout.”

Michelle McCrimmon and her daughter, Emma, attended the presentation. Michelle has been taking her three children, ages 12, 16 and 18, to such events for the past several years. “It’s a big issue and there’s a big problem to solve. We can bring awareness that this is happening and be looking out for it to help victims and bring in law enforcement,” she said. “There are a lot of social issues that contribute to the problem. If I can bring my son to these events and share it with his peers, it will help make people aware.” She recently brought him to an event in January where he volunteered.

Her daughter, Emma, says, “Where I’m growing up, I don’t feel threatened, but I know there are bad areas.” She says it helps her be “on guard.” “It makes me aware that I’m not living in fairy land and I have to watch out.”

McCrimmon acknowledged, “It’s a fine line between making them (children) aware and not making them fearful that they’re going to be pulled into that. As much as we try to shelter our children, they are going to be out in the world. They need to be aware.”

After sharing startling statistics, Deacon Molina stressed the connection between pornography and trafficking and explained how free sites, in particular, are used to recruit and control victims based on their online activity. He emphasized it is not just an adult problem. Males and females ages 12 to 17 are the largest group of internet pornography users. He asked parents two consider tracking software that blocks inappropriate messages, websites, and also monitors online activity – applications like Covenant Eyes, X3 Watch, TeenSafe and My Mobile Watchdog. In order to protect your children, “parents have a right to see what’s on their child’s phone,” Molina said.

He went on to explain children are often being lured into dangerous situations and will not tell their parents for fear of the repercussions. He stressed open lines are communication are vital. “Your child must know that, if they’ve made a mistake in life, they can come to you and you will help them, not criticize them. We all make mistakes. They must have confidence in you,” said Deacon Molina.

With such startling statistics, it is easy to become overwhelmed. “You can’t approach this subject from the standpoint of fixing a huge problem,” explained Incarnation’s parish pastor, Father William “Doc” Holiday. “To fix a huge problem you have to start at its foundation. One of the foundations is to let people know the dangers that are out there. We don’t hear about sin like we should or the evils of the world… If our kids don’t know, they’re not cautious…  Evil in this world is real. That is why we have the Sacraments.” He also urged parents to openly discuss these issues with children in order to protect them. “It starts within ourselves. When we get stronger, we can share it with our kids; then our families will be stronger; then our parishes will be stronger and consequently we won’t have as much of a problem as we have right now.”

Incarnation Parish will host another presentation for youth ages 13 and up on March 23, from 12 noon – 2 p.m. Children and parents are encouraged to attend.

If you suspect someone is being trafficked, call the Central Florida Human Trafficking Hotline at 407—504-1319.