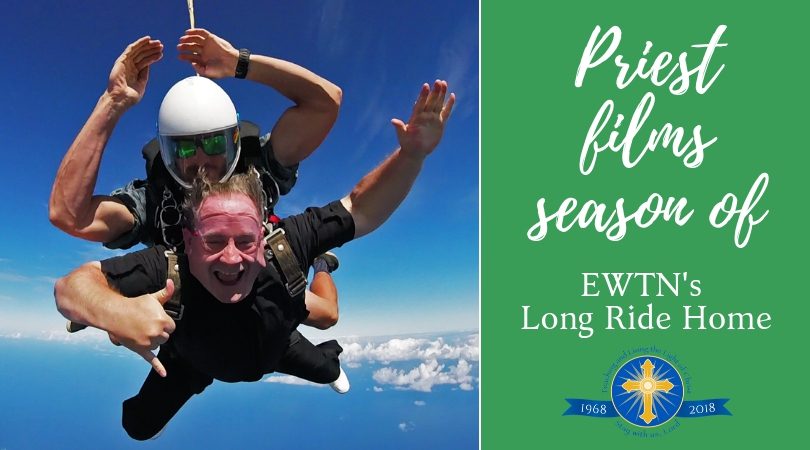 ORLANDO | “Courageous virtue and Catholic masculinity have fallen to the wayside,” notes Father Scott Circe, pastor of Holy Name of Jesus Parish in Indialantic. That’s why he recently agreed to be chaplain for Season Three of Bear Woznick’s, The Long Ride Home on EWTN. “It’s important to show courageous men doing adventure activities, but also, in the midst of those activities, recognizing God’s providence and blessings in our lives and being confident enough to share our faith journeys.”

When Woznick, a part-time parishioner at Holy Name of Jesus Parish, approached his pastor about joining him in Hawaii for the filming, the priest admits he was initially taken aback. He eventually decided to join the crew, allured by the prospect of going to the Hawaiian Islands to visit the place where two of his favorite saints, St. Damien de Veuster and St. Marianne Cope, worked and died while serving its infamous leper colony. A volcano and one tropical storm later, Father Circe found himself smack in the middle of an adventure of a lifetime.

As a chaplain, he offered spiritual support to the crew, listened to Confessions and celebrated daily Mass. “It’s so important to have a priest there for the men to have confession and communion,” said Woznick. “But I’ll tell you a secret. He (Father Circe) also did a good job of acting.” He explained, “We always try to have a couple of minutes of comic relief so Father Scott was the head of the biker gang (Scotty Von Zipper, a play on the 1965 character in Beach Blanket Bingo). He was hysterical.” The scene was a dream sequence and included a biker fight of rock, paper scissors.

All humor aside, The Long Ride Home tackles serious theological subjects through entertainment and strenuous adventurous activity. Father Circe explains, “The season’s topic revolved around the five transcendent desires of the human heart that bring us into relationship with God (based on Father Robert Spitzer’s book, The Soul’s Upward Yearning). The desires are: for perfect knowledge or truth – knowing something that is beyond the measurable here on earth; the desire for perfect love; for perfect justice, for perfect beauty and the desire for a perfect home or being – that our hearts yearn to be in communion with God in the kingdom of Heaven, but we still try to bring about heaven here on Earth.”

“We are evangelistic,” says Woznick. “You can reach people through Catholic apologetics, through doctrinal people, but also through this eros (desire) which God has put in all of us. And because the younger generations don’t even believe in God, that makes talk of doctrine or apologetics difficult… We want to be real men, experiencing real life, with real failure. We don’t want the petty drama of most reality TV shows. We want the Rocky Balboa sort of overcoming drama.”

This is why most of the teaching comes from men sharing life experiences and telling their stories through their outdoor activities. Parishioner Dr. Lance Maki, is a regular on the show often sharing the struggles of being a Catholic obstetrician and gynecologist. He has lost positions because of his commitment to respect life. The pilot, champion surfer, biker, and teacher for Theology of the Body and Natural Family Planning shares the challenges in embracing social justice and being a pro-life doctor.

Another example was the testimony of Hawaiian surfing legend, Clyde Aikau’s at Makapuku Point speaking about losing relatives to suicide, “raked in sorrow”, said Woznick. The segment was on the call to make things right with our relatives.

Part of Father Circe’s job as chaplain was to integrate the topic and their experiences. He took this opportunity during a homily, reflecting on the desire of yearning to go home. “I balanced that with the outrigger canoe experience we had,” he said. “In the midst of searching for the goodness and that home God wants for us, we have to get together as a group, which is the church. The canoe represented that. We all got in together and we were rowing in the same direction. We were crashing over the waves of materialism and secularism. We were then able to embrace God’s path, which brought us in as we caught a wave. And as we were coming together towards the shore, we were looking left and right and seeing other surfers catching that same wave. It shows that other people are on different paths, but the Lord is also guiding them in his grace to come together.”

All in all, “It was a great experience of gathering together as Christian men and supporting one another,” said Father Circe. “Hopefully it will inspire others as an evangelical tool to be comfortable with who they are as children of God, as men created in the image and likeness of God to be good examples of Christian manhood. Also to embrace a courageous virtue, to stand up and be good fathers, role models, husbands, good businessmen who are leading lives of virtue and honor. Hopefully, we can continue to inspire others to be good witnesses of Christ, no matter where the Lord brings them.”

By Glenda Meekins of the Florida Catholic – October 11, 2018