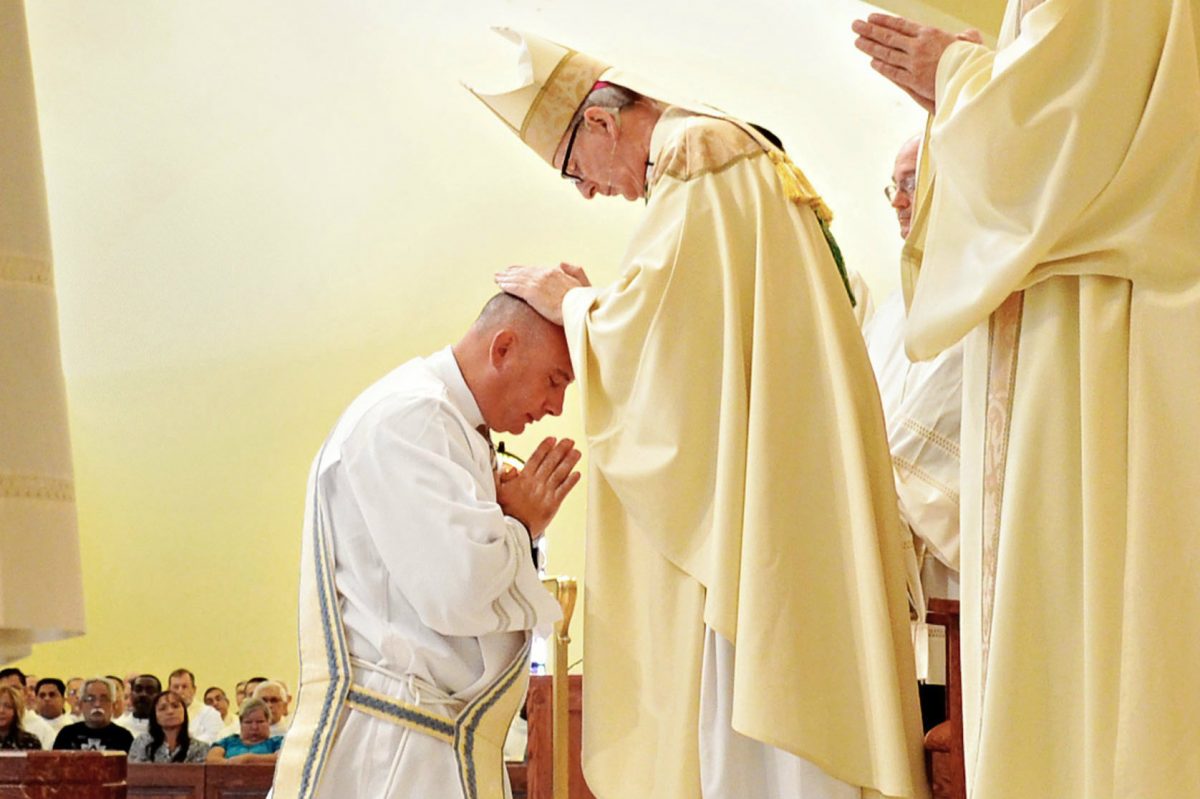 Father Juan Osorno began having dreams of the priesthood at age six. As part of a family who was “100% Catholic” according to his own description, participating in the celebration of Mass, praying the rosary, attending Holy Week processions and Advent festivities were always a part of who he is. On May 27, his dream of becoming a priest became a reality when he was ordained to the Order of Priesthood in the Diocese of Orlando.

As the choir and congregation chanted, “Christ the Lord, a priest forever in the line of Melchizadek, offered bread and wine,” Father Osorno was vested with the stole and chasuble proper to priests by Father Tim LaBo and Monsignor Michael Muhr, both priests that are significant in Father Osorno’s life. Father Osorno will serve as parochial vicar under Father LaBo at Holy Redeemer Parish in Kissimmee as his first assignment and Monsignor Michael Muhr was his spiritual director while at St. Vincent de Paul Regional Seminary in Boynton Beach. The symbolic changing of the garments represented that he has clothed himself with the Lord Jesus Christ (Rom 13:4).

Yet there were others along the way who inspired him on his journey. Father Osorno paid tribute to his family and his grandparents in particular, who fostered a love of God and of the rosary. He still remembers how, regardless of where they were, his grandparents would stop every day at noon to pray the Angelus. His two sisters, brother, father, and stepmother, Stella, were all supportive of his desire to become a priest from the beginning. His stepmother had only one requirement: “… be a holy one or you’re not going be one at all.”

His father’s strong intuitive sense was reassuring, so when he said, “Juan, I am so convinced that this is coming from the Lord and I can feel it and you’re going to do great,” Father Osorno knew he was making the right choice. It was the confirmation he needed to go forward. Although his father could not attend the Ordination due to illness, he was able to watch via livestream.

In his homily, Bishop John Noonan said, “For Pope Francis, the fundamental question of priestly life is ‘Where is my heart directed?’ ‘The heart of the priest is a heart pierced by the love of the Lord,’ Pope Francis declared. ‘For this reason, he no longer looks to himself, but is turned towards God and his brothers and sisters. It is no longer ‘a fluttering heart,’ allured by momentary whims, shunning disagreements and seeking petty satisfactions. Rather, it is a heart rooted firmly in the Lord, warmed by the Holy Spirit, open and available to our brothers and sisters.’ In the Heart of the Good Shepherd, he said, ‘the Father’s love shines forth.’”

At age 42, Father Osorno will live out this call and begin to shine forth his light as a priest by serving at Holy Redeemer beginning June 16.

His message to parishioners of every parish: “In today’s situation, of the Church, there is a great need for priests.  There are so many priests right now running two and three parishes. And in our own diocese we see so many retiring. A parish is healthy when they promote vocations—when they pray for the priests. When they pray for the kids and when they motivate the kids to see as something beautiful a call that is greater than anything else.”