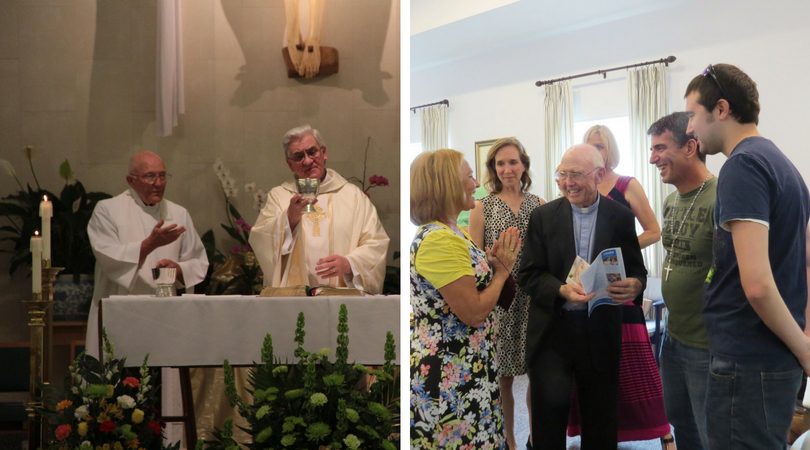 Many of us dream of retirement and a more leisurely pace of life to pursue hobbies, travel and other activities but, for Monsignor David Page, that retirement has never fully come to fruition.  Father Page, a retired priest at Holy Name of Jesus Catholic Church in Indialantic still logs a 30-40 hour work week, anointing the sick, saying Mass and listening to confessions.

The 85-year-old native from Ireland is one of 52 priests officially retired in the Diocese of Orlando, where he served most recently as a pastor of Holy Name of Jesus for 23 years. Father Page also has served in three other parishes including St. James Cathedral, St. Mary Magdalen in Altamonte Springs and the Church of the Epiphany in Port Orange, which he helped establish in 1962.

“It’s a very enriching experience to be retired as a pastor in a parish that I have worked for in all these years,” said Father Page, who will be celebrating 60 years as a priest next year.

Like Father Page, many of the retired priests, who are still able, continue to be active and help out at their parishes. On Nov. 12, a collection for retired priests will take place to assist with their spiritual, pastoral and medical needs. The money collected also allows them to participate in retreats and convocations. Father Page said the collection is important to help enhance the life of retired priests.

“Without the support of the people, we wouldn’t have flourishing parishes, schools and the large number of priests and sisters,” he said.

Father Page’s dream of becoming a priest began at 14 years of age when an Irish missionary priest came from Africa to visit his three-room country school. The following September, he entered a seminary boarding school run by Jesuits. Father Page hoped to travel to Africa to help the people there. His second choice was New Jersey, where his sister lived. However, in 1958 he was assigned to St. Augustine, FL under the leadership of Archbishop Joseph P. Hurley, who had established a burst fund to pay for tuition for priests and build churches during the 1940s, 50s, and 60s, when four million dollars was raised for the education of priests. At the time, 40 percent of the priests were from Ireland.

“Florida is really blessed with a lot of vocations. When I came, there were no vocations in Florida. Florida is really flourishing because of the support of the people, the support of their faith and Archbishop Hurley who did more for Florida than George Washington did for our country,” Father Page said. “His vision and foresight was responsible for what the church is today.”

For a time, Father Page not only fulfilled his duties as a priest, but also served as the editor of the Florida Catholic. However, he said his greatest accomplishment over the years has been helping build up the parishes he served especially establishing the building program at Holy Name of Jesus and Christ Renews His Parish retreats, in which 3,000 parishioners have taken part. The program has since spread to 40 additional parishes.

“It’s very effective for young adults who have been away from the church,” he said. “It has brought joy and purpose and a way for spreading the faith. It has become a very vibrant community as a result.”

When Father Page isn’t busy with hospital work, funerals, visiting the sick and saying Mass, he enjoys reading, walking and playing golf.  He said he gets to visit family Ireland every year or two and he still hopes to make it to Africa one day.