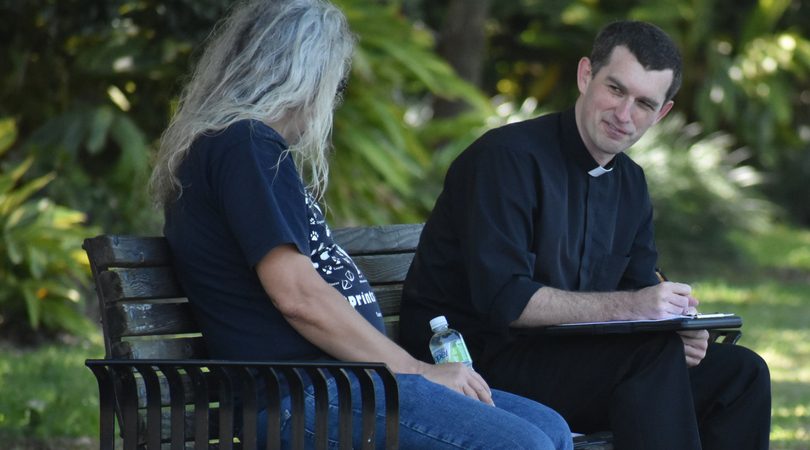 It’s a sunny day around noon, and you can find Father Chris Dorsey, parochial vicar at St. James Cathedral in Orlando, a few blocks from his parish, sitting on a bench overlooking Lake Eola. He’s not just taking in the warm Florida sunshine. He’s hoping someone will notice his sign: “Catholic Priest: Prayer, Confession, Conversation.”

The idea was inspired by previous seminarian classmates who later served as college campus ministers. He figured, “The downtown park is the middle of everything, so I thought I would see what happens.” He says there’s about a 50/50 chance of people stopping to talk. “More so, what I’ve realized is the change that occurs when people see me. A lot of times you’ll hear the conversation change. I think it’s a good witness to the faith and even if people don’t stop to sit down and talk, it changes something about the conversation and about their day just to see me there.”

Father Dorsey began the practice as a Lenten offering, but he said he plans to continue beyond that. He can be found there three days a week, either at lunch time or in the evening after people have returned home from work and are out for a stroll. He says more than 75% of the time, people ask to take his picture. Recently, a parishioner shared the photo on Facebook and Instagram, launching him to the No. 1 spot for Catholic priests on Instagram. “To me, that shows there’s a hunger to see more priests in public and that it’s not seen enough. I hope it inspires other priests,” he said.

He acknowledges that, because a priest’s life is very public, “the temptation is to pop the collar out when we’re out in public and go incognito. And this is full ministry mode. It is not relaxing, doing nothing. But the gains from it, even if it’s just a change in conversation or the hope and pride in the Catholic faith that I give somebody—it’s worth it.”

Father Dorsey admits he has yet to have someone come for Confession, although some have suggested their friends should. It is more counseling and sharing their own stories, including his.

“In the Church, we sometimes get caught up in being sacramental vending machines,” he acknowledges. “We do Mass, Adoration, Confession. But God calls us to be more, to evangelize. It’s good for my heart to live out that part of the Gospel.”