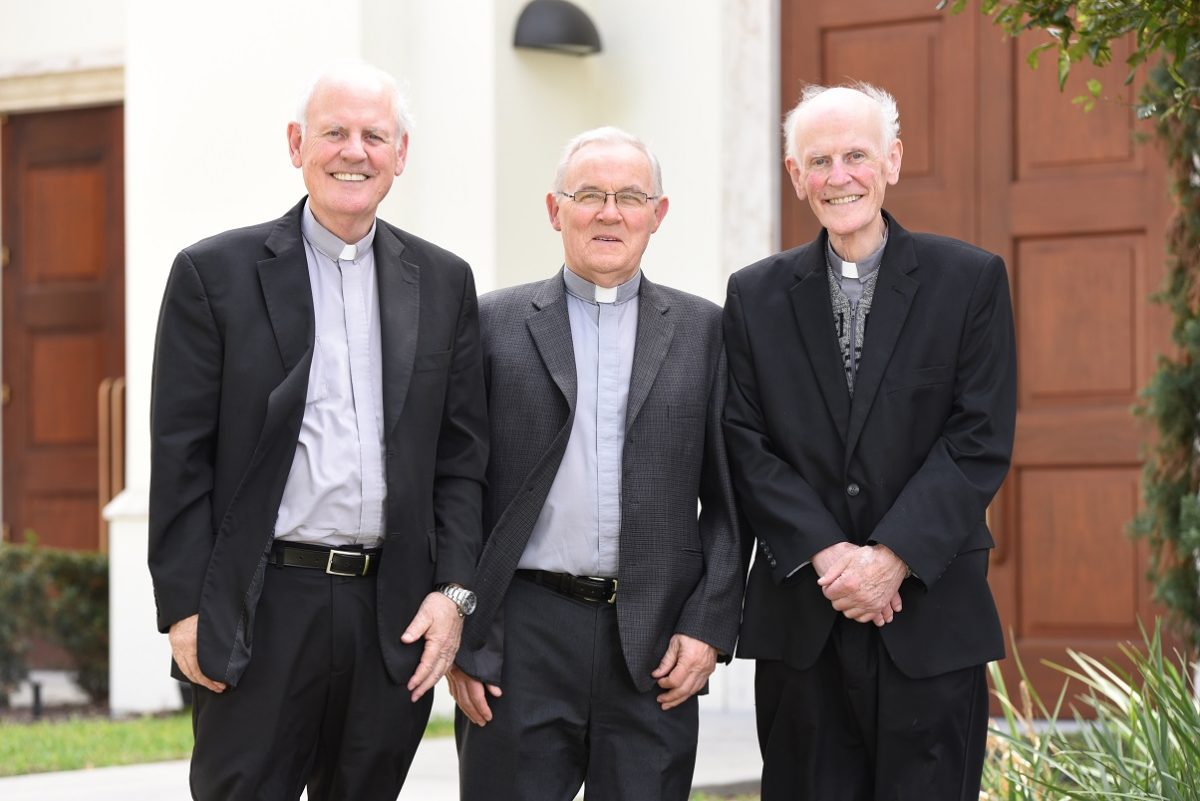 “Arriving in Florida was like landing on the moon as far as we were concerned,” said Father Paul Henry, remembering his arrival to the Diocese of Orlando in August of 1968 with his twin brother, Father Peter Henry and dear friend, Father Richard Walsh. The Henry brothers met Father Walsh while in seminary in Dublin and immediately after Ordination they made the long journey to the United States to serve in the Diocese of Orlando, which had only been established two months prior. Now, fifty years later, the trio remembers the Diocese of Orlando’s early days and reflects on the challenges and blessings of the last half-century.

“Few people had heard of Orlando at the time. Now it’s in every travel agency in Europe,” remembered Father Peter Henry, who currently serves as the pastor of St. Ann Parish in Debary.  “Back then somebody told me at the gas station, “Orlando is a cow town. It’s a city operating on citrus and cattle.”

Father Peter said it turned out to be a fair description as they arrived a few years before Disney World and the rapid growth that would follow. They found themselves surrounded by orange groves, sand-covered streets, and miles of beaches – not to mention the blazing hot sun.

“It was just such a change,” said Father Walsh, pastor of St. Margaret Mary Parish in Winter Park. “Plus, there was sand everywhere and the palm trees. No green fields, the lovely cattle, sheep and everything that I was accustomed to.”

In addition to the cultural differences the three friends experienced, the Church and the nation were also experiencing tremendous change in 1968. Father Walsh remembers celebrating his first Mass in English when he came to Florida as the Church was still implementing the reforms of Vatican II. America was in the midst of the civil rights movement and many communities were still largely segregated. The Vietnam War divided the nation, while the space program united it.

“It’s just a fact, 1968 was the year we came and America was in a revolution: educationally, from the point of view of civil rights, a huge range of issues,” said Father Peter. “It was all the more interesting for that.”

Seniors at the high schools were preoccupied with the possibility of being drafted after graduation. On the Space Coast, astronauts received the Sacraments before their missions, unsure if they would return home safely. Parishes wrestled with the practicalities of implementing Vatican II changes. The three priests remembered this “Viking period” with a laugh and commented how different life as a priest seemed from what they learned in their old Latin textbooks at seminary.

“At the time, part of the immense change in the world was in the Church itself, where all the ways we learned kind of got suspended and were no longer the way to go and the new ways had not been developed,” said Father Paul, rector the Basilica of the National Shrine of Mary, Queen of the Universe. “You’re operating off the seat of your pants in some degree. The faith didn’t change and the essential things didn’t change, but the way you did ministry changed.”

“The whole message of Vatican Council II was that the call to ministry is a call to everyone,” continued Father Peter. “We’re all baptized and must play a part. I marvel today at the number of people at any given parish who are pulling the community together, serving the community, ministering within it and beyond it. That is a wonderful blessing that came out of the new perception of Vatican Council II – that the people are the Church and we’re all in this together and so much can be done when we collaborate.”

The involvement of the laity was counted as one the greatest blessings as the priests saw the diocese grow from sixty parishes in 1968 to ninety-one parishes today. They also commented on the great diversity the growth has brought the diocese and the enrichment that brings the community. Each of them agreed that the Diocese of Orlando has been a wonderful place to serve.

“It has been a great mission,” said Father Walsh. “The people are wonderful and I think they made it happen really. I think we’re truly blessed to be here.”

“How lucky we are that God arranged it for us to come to this place,” agreed Father Paul.

“We were blessed with our bishops and with the people of course,” added Father Peter. “I thank God for that 50 years later.”