Queen of the Americas celebrated at Lake Eola 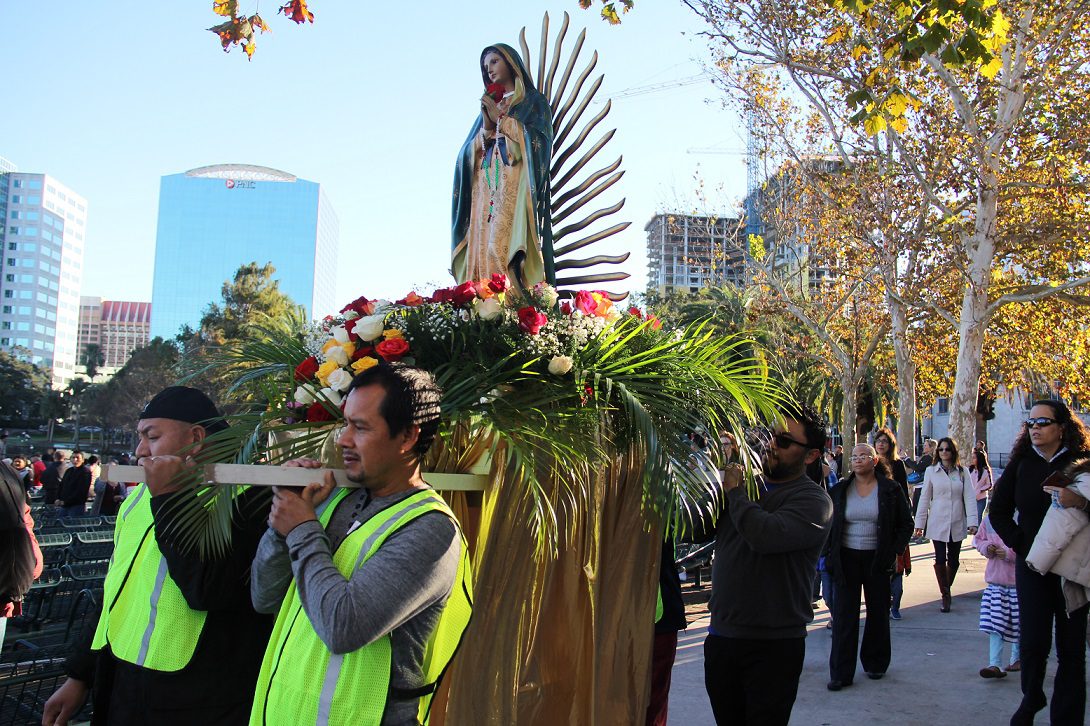 By Glenda Meekins of the Florida Catholic Staff – December 12, 2017

At age 17, Fernando Aveitua, received a copy of the transcript of the conversations between Our Lady of Guadalupe and Juan Diego. As part of Amigos Unidos en Cristo youth group, he was tasked with putting together a reenactment of the miracle of Tepeyac. He quickly enlisted his family to help. More than 20 years later, on Dec. 10, that tradition continued in an event hosted by St. John Vianney Parish at the Lake Eola Amphitheater in Orlando.

Aveitua’s sister, Lisette St. Hilaire, recalls, “No girl wanted to participate so my mom said, ‘You’ve got to help your brother, so I was Our Lady.” She was 13-years old at the time. Her brother played the part of Juan Diego. The family continued to faithfully participate in the reenactment until, one week after the tenth presentation, Aveitua tragically died in a car crash. In her grief, St. Hilaire could not continue until years later, living in Orlando and attending St. John Vianney Parish, she felt it was time.

“At first, it was so painful for my family to even think about doing it. We could not get near a church on Dec. 11 because it reminded us of him. But when I moved here, I wanted to honor him and keep going with his work.” She added, “Thanks to Father Miguel González’ (then pastor of St. John Vianney) leadership, that first year we expected 50 people. We got about 1,200. We weren’t ready to handle the crowd.” That was 15 years ago.

St. Hilaire noted, “Our reason for this is to evangelize. That is why we do it outside the confines of a church, to the public in a general forum—for everyone and anyone. There is so much meaning to the reenactment.”

Achieved through the efforts of Staff Guadalupe, a group of volunteers from St. John Vianney and other parishes, the public witnessed the procession of the statue of Our Lady of Guadalupe from St. James Cathedral to the amphitheater. Nicandro Alvarado, who has played the part of Juan Diego for the past seven years said, “I felt the Virgin calling me to do this. It is not me who does the work, it is Juan Diego through me.” Although the evening temperature plummeted to the low 50s, he said he did not notice, despite his bare feet. He added, “The Virgin has interceded for me before God so often I cannot count. She is our advocate and grants us many miracles. As Catholics, we venerate her.”

The highlight of the event was the reenactment of the Miracle of Tepeyac when Our Lady of Guadalupe, in 1531, appeared to Juan Diego on the hill of Tepeyac asking him to build a church in her honor. It took several visits to Bishop Juan de Zumárraga before he witnessed the miracle of Our Lady’s image on Juan Diego’s tilma. It was revealed after he unfolded it and Castilian roses (neither in season or native to the region) fell out.

Jaquelin Sorriano, a parishioner of St. Isaac-Jogues Parish held her rosary to her heart as Father Miguel Gonzalez blessed it. It was a gift on her wedding day 27 years ago. She testified to her devotion to Mary saying, “She is my mother who is always with me. She takes care of me each day.”

“As Christians we have a great love for Mary. Uniting tradition with love of Mary, we must support all that is good,” said Father Carlos Cabán, S.D.B, parochial vicar of St. John Vianney Parish. “Our Lady of Guadalupe is the patroness of all of the Americas. This expression is tradition, culture and faith. It is important to do this in a public place so that, as we live out our faith, it is a witness and testimony to others.”