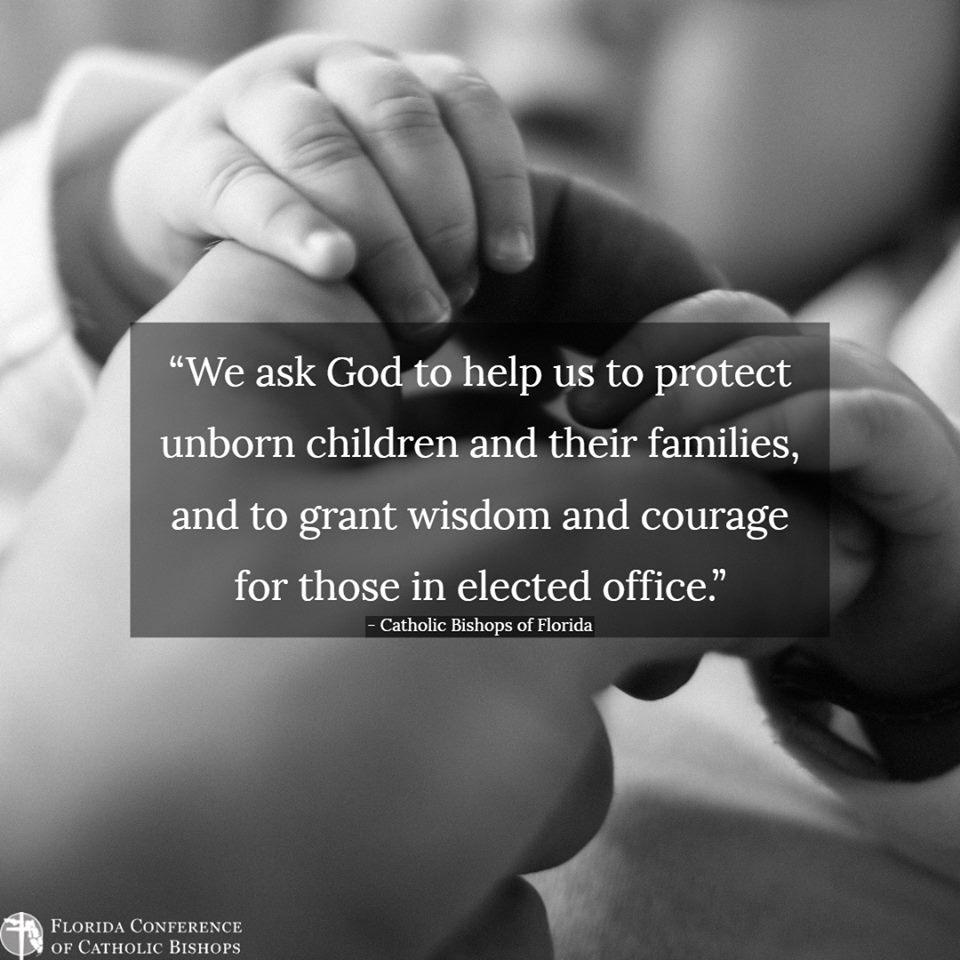 The bishops of Florida join with Catholics and others of goodwill in reacting in horror and disgust to the recently passed law in New York State that legalizes abortion essentially for any reason through all nine months of pregnancy and removes any protection for children born alive after abortion. Sadly, similar bills were proposed in Virginia and elsewhere. As Archbishop Joseph F. Naumann, Chairman of the U.S. Bishops’ Committee on Pro-Life Activities, stated, “This legislation is evil, pure and simple.”

The status of abortion in Florida

Floridians can take some comfort in knowing that in regards to our state’s respect for children in the womb, Florida is not New York. Florida’s laws, as well as its present political realities, are substantially different than in the state of New York. With the current make-up of our legislature and leadership in the Florida House, Senate and governor’s office, a New York-type abortion bill stands no chance of passage in the Sunshine State in the near future.

Florida faces its own challenges in prohibiting or limiting abortion. Notwithstanding those challenges, numerous laws have been passed in Florida including:

Since 1969, the bishops of Florida, through the Conference, have been a consistent voice for human life and have actively engaged the Florida legislature to promote passage of these life-saving bills. The bishops will continue to be strong advocates for the passage of laws that protect and defend unborn babies and their mothers and fathers.

Much work still needs to be done

As noted above, Florida faces unique challenges in regulating and restricting abortion. As a result of an interpretation by the Florida Supreme Court, the privacy clause in our state constitution was found to provide a broader right to abortion than the U.S. Constitution. Consequently, unjust rulings have kept good laws from going into effect that seek to limit the harm of abortion. Laws blocked by our courts include requiring a 24-hour reflection period prior to abortion, which is still pending appeal, and parental consent prior to a minor’s abortion.

Even if the U.S. Supreme Court reverses Roe v. Wade, abortion could remain legal in our state due to the Florida Supreme Court’s broad interpretation of Florida’s privacy clause. “We advocate for the reconsideration of these decisions, and we remain hopeful that the courts will ultimately protect women in Florida from the predatory practices of the abortion industry,” said the bishops in their Statement on the 46th Anniversary of Roe v. Wade, January 22, 2019.

Please reach out to your lawmakers

Your lawmakers need to know where their constituents stand on this critical issue. Please send a message urging both your state and federal lawmakers against ever enacting legislation similar to the immoral New York State law. You may utilize our advocacy network to assist with sending your message.

Pray for an end to abortion

Please pray for our elected and appointed leaders. Pray especially for those that support and celebrate abortion, that their eyes will be opened to the atrocity of killing an innocent human life in a mother’s womb. Pray that those who are pro-life and oppose abortion are reassured and strengthened in their convictions. Pray that all may recognize that devaluing the most innocent and vulnerable life leads to a coarseness and callousness towards one another and all life. And, pray that we have the strength to continue to fight until the scourge of abortion is brought to an end.