Recovering in an unexpected place 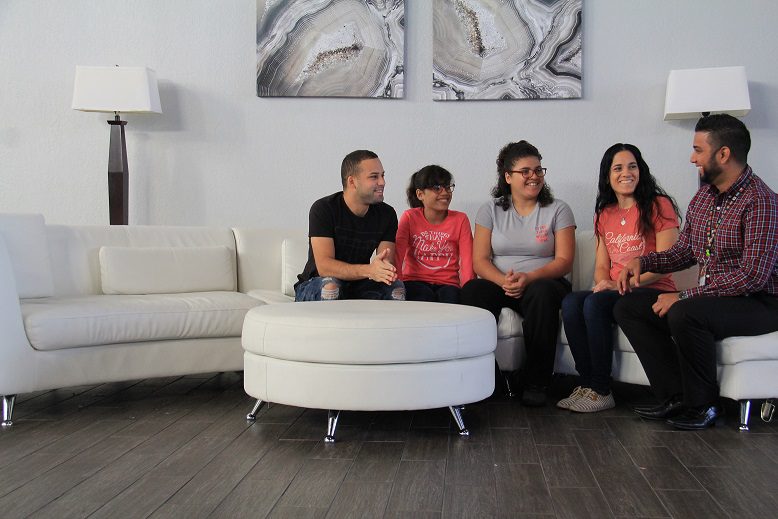 Thanks to the helping hand of Catholic Charities, we will move forward. Finding a friend in Julio, amidst all that is happening, gives us hope that me and my family will overcome this just as many other Puerto Ricans,” shared José Hernandez, who moved to Florida after Hurricane Maria hit Puerto Rico in September. (GLENDA MEEKINS | FC)

By Glenda Meekins of the Florida Catholic staff – November 16, 2017

ORLANDO | In the days preceding Hurricane Irma, José Hernandez’s family began preparing supplies for a few days as all projections indicated that their town of Vega Alta, Puerto Rico would not receive a direct hit from the storm. The strong winds provoked falling trees, blocking roads and cutting off power. Within days, there was another storm on the horizon. With Hurricane Maria quickly approaching, Hernandez, his mother Diana Otero and two sisters had no time to prepare.

“By the time we left, 28 days after Hurricane Maria hit, we still had not received power,” said Hernandez. “We have friends here in Orlando who had left before us and explained that the governor was allowing people to come from Puerto Rico and receive aid in Orlando. We understood it was our chance to improve our situation.”

Without power, many like Otero had lost their jobs. Hernandez had been a promising communications student going to university and was working as a waiter in a local restaurant chain while waiting to begin a new job at a television station. The eatery where he worked suffered severe damage and he was relocated to another restaurant farther away with less hours. He could not cover his family’s expenses, so the move was their only option.

Diana Otero recalled their arrival to the Airport Welcome Center where almost 30 agencies from throughout the region, including Catholic Charities were assembled to support the influx of residents. “Going from table to table at the airport, I felt lost. I felt I had no support and no idea where to go or how to begin. But arriving at Julio’s table, he took care of us,” she said as she tried to control her emotion.

Julio Rivera is Catholic Charities’ emergency services manager. A native Puerto Rican, he said, “I understand their suffering. It’s one thing to hear about something like this happening. But when it happens to your own, it has a different impact. This is my homeland and these are my people.”

In partnership with the United Way, Rivera was able to settle the family in a nearby hotel room with a small refrigerator and microwave. The girls have not begun school due to their lack of permanent housing, but they will join their mother in English classes through Catholic Charities’ Pre-Literacy program and the family is taking advantage of the Mission Market until their situation becomes stable.

Hernandez, who is now working said, “If we got here, there is a reason. Meanwhile, we move on. Thanks to the helping hand of Catholic Charities, we will move forward. Finding a friend in Julio, amidst all that is happening, gives us hope that me and my family will overcome this just as many other Puerto Ricans.

Otero added, “One can never imagine that something like this would have happened to us, but God never abandons us. Sometimes he tests us, but he always sends people to help us along the way.”