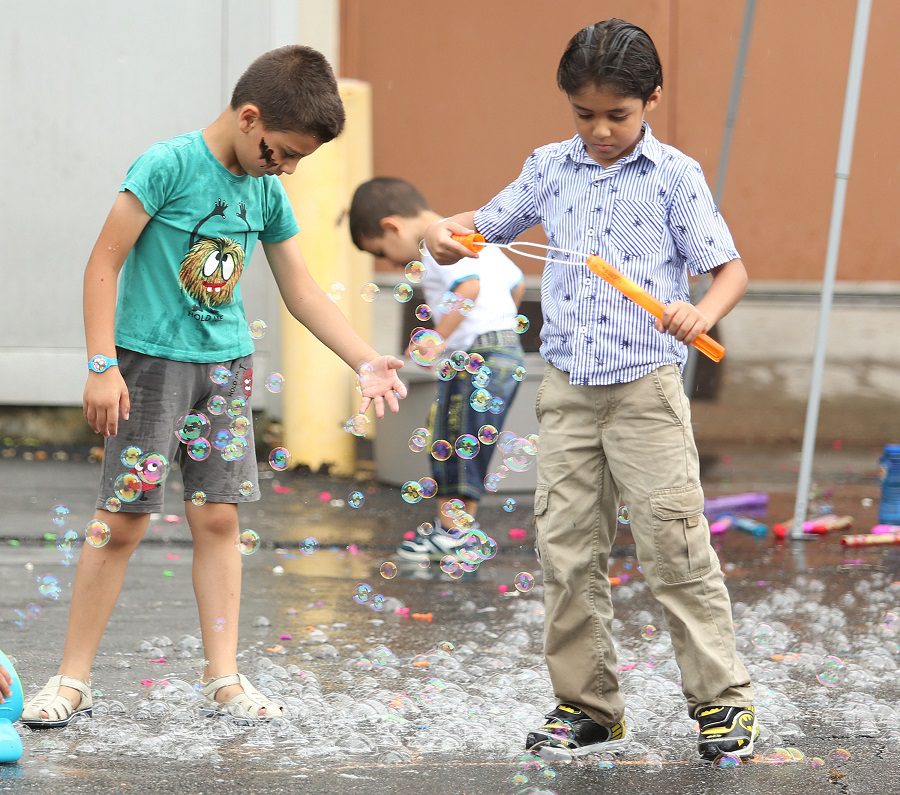 7-year olds Jawan, left, and Hamzah, right, play in bubbles outside Catholic Charities Refugee Back to School Bash. 57 refugee children received donated backpacks and school supplies at the event in anticipation of the new school year. Dozens of volunteers welcomed families who were treated to a hot dog dinner, face painting and crafts. (STEPHEN DOWELL | FC)

ORLANDO | The Khojas, a family of six, arrived in Central Florida in May, escaping a dangerous situation in their homeland of Syria. With the help of Catholic Charities of Central Florida, they have been learning a new culture and a new language, and adjusting to having a stable home once again. For their 7 year old son, part of that adjustment will be starting the first grade in a new school this August. He was one of fifty-seven refugee children to receive a free backpack filled with school supplies at a back to school celebration on August 11 hosted by Catholic Charities of Central Florida in Orlando.

“The best part was seeing the smiling faces of the kids as they came up to choose their new backpack,” said resettlement program manager Carolina Toro. “Refugee families don’t have a lot of money to spend on things like school supplies. Having an event like this, helps the kids get what they need to start school, some of them for the first time.”

The families arrived and were greeted by nearly 20 refugee resettlement volunteers who had prepared a hot dog lunch, played games, painted faces, and made crafts with the kids. The school supplies and backpacks, totaling nearly $3,500, were provided by several groups and individuals, including a group from St. Mary Magdalen Parish in Altamonte Springs, while Most Precious Blood Parish in Oviedo provided the funds for all the food.

The event was coordinated through a United States Conference of Catholic Bishops program, Parishes Organized to Welcome Refugees (POWR), designed to increase participation among parishes and other community groups to assist and welcome newly arrived refugee families to the community.

“In the past month the volunteers from our POWR program have logged nearly 700 hours,” said Catholic Charities POWR coordinator Nicole DeCarufel.  “Volunteers help build friendships, provide emotional support and those extras that newly arrived refugees need to adjust to all the challenges they face.”

Families like the Khojas have benefited from having mentors and volunteers. “When they first arrived, there was no housing available for six weeks.  Volunteers brought daily meals to the family,” said case manager Rand Abdulhadi.

“We had to leave Syria when our village was shelled. My husband worked for the court and there were groups that were looking to capture him for money,” explained wife, Yasmine. The family fled to Turkey where they went from house to house to live as cheaply as possible to survive.

“There were many nights we had to go hungry. I don’t wish this experience on anyone,” said grandfather Mohamad. “We felt so alone and not cared for in Turkey. We suffered a lot there. People should live in peace and safety.”

The wait was over three years for the family. After their refugee status approval, the family had to wait for the Turkish government to allow them to leave, before finally arriving in Orlando.

“We feel this country is full of mercy and consideration, a country of laws and we appreciate that,” said Mohamad. “In Turkey, they treated us like refugees.  In the United States, they treat us like everyone else who lives here.”

Throughout the summer, youth case managers from Catholic Charities have been working to provide English tutoring to prepare their oldest son for school. Yasmine reflected, “We are very optimistic about the new school year.  We want our boys to achieve a high education and become doctors, so that they can serve this country.”