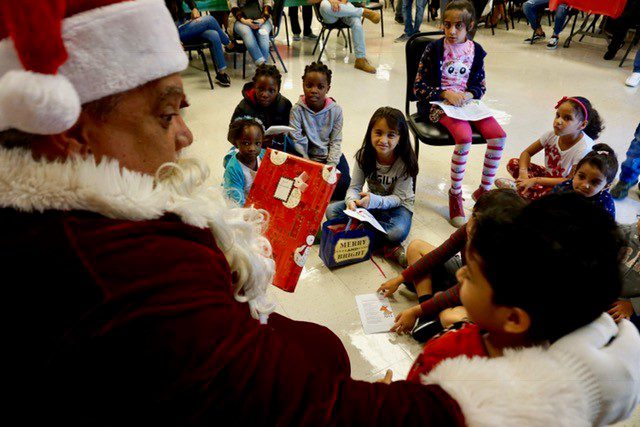 Refugee children listen carefully to what Santa tells them, after enjoying a pancake breakfast and receiving gifts during their first Christmas in the US. (JENNIFER POWERS | FC)

ORLANDO | Wide-eyed children from countries like Cuba, Burma, Congo, Colombia, Iraq, and Syria waited eagerly for their names to be called, December 16th at the Knights of Columbus Hall 2112 in Orlando,  to receive their first-ever gift from Santa. They, along with their families, who arrived in the U.S. during the past year through the refugee resettlement program at Catholic Charities of Central Florida (CCCF), were treated to a full pancake breakfast prepared by Knights of Columbus volunteers. The Knights oversaw the festive decorations, ensured the timely arrival of Santa, and were ‘elves’ ready to serve families as they lined up for their first Breakfast with Santa.

“You guys bring the world to us,” says Knight Bill Mazanec, who coordinates the refugee event with CCCF, whose partnership is now in its sixth year. “It is beautiful to celebrate the first Christmas with new families year after year. To see the sparkle in the kids’ eyes as they see Santa and get their gifts is really special.”

Adult and youth volunteers from St. Isaac Jogues and Good Shepherd in Orlando, passed out song sheets, played guitars and led the singing of Christmas carols, while others helped kids make holiday crafts like tree ornaments. Providing the gifts was a women’s bible study group from Most Precious Blood in Oviedo, who made sure each child received a lovingly wrapped gift chosen specifically for them.

“Thank you (to CCCF) for allowing us to serve in this way,” says Mazanec. “We (Knights) have a saying, ‘In service to one’-meaning God, ‘In service to all’—which is everyone else. It’s an extension of our faith life; charity, that is why we became Knights.”